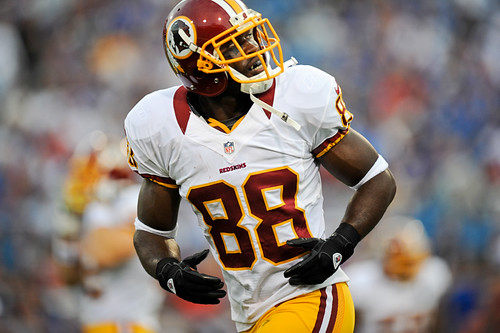 Another week has come and gone for the Washington Redskins, which means it’s time once again to rush to judgment on all things burgundy and gold related.

As has become customary around this time each year, I once again present to you my take on the top 10 Redskins players through the second week of training camp. For those who aren’t familiar, these are the players who have risen to the challenge and made a strong impression during the second week of camp.

1. Pierre Garcon, receiver – Since training camp started, Garcon has consistently been the top performer on the field for the Redskins. While it’s easy to write off stellar showings when a player is competing against his own teammates in shorts and shells, there’s no denying that Garcon was the best player on the field for either team when Washington traveled to Buffalo.

Fantasy football fans take note: Out of all the players battling for playing time at receiver, it seems like Garcon is the first to develop a bond with Robert Griffin III. That dynamic duo could be prominently involved in the 2012 season.

2. Trent Williams, left tackle – Williams’ effort on Garcon’s 20-yard touchdown reception against the Bills should be shown on a continuous loop to any high school or college kid dreaming of one day playing in a zone blocking system. If he doesn’t haul ass upfield and take out the safety, there’s little chance Garcon is able to somersault into the endzone for Washington’s biggest play of the night.

The only cause for concern was Williams was seen limping after the game. With three out of the five starters on the offensive line already out of the lineup, it’s safe to say the team can’t afford to lose their left tackle for any length of time.

3. Ryan Kerrigan, linebacker – When the Bills starters were in the game on offense, Buffalo’s gameplan was to get rid of the ball as quick as humanly possible. As soon as the ball was snapped, quarterback Ryan Fitzpatrick took a step or two backwards and then dumped off the ball in rapid-fire fashion. And yet, Kerrigan still managed to get a sack one his first play and batted down a pass attempt a little while later.

4. Robert Griffin III, quarterback – Griffin was able to overcome a slow start and spotty officiating to turn in a very respectable evening (completing four of six attempts for 70 yards with a touchdown) in his preseason debut. Best of all, the new face of the franchise was never touched by an opposing player and looked right at home in head coach Mike Shanahan’s offense.

5. Richard Crawford, cornerback – Crawford jumped out to a great start with two interceptions during his first week of training camp. So what did the seventh-round pick do for an encore? Picked off a Tyler Thigpen pass and returned it 16 yards to give Washington’s offense the ball back after quarterback Kirk Cousins had thrown an interception of his own. Crawford also looks right at home in the return game, which only increases his value in the eyes of his coaching staff.

6. Lorenzo Alexander, linebacker – When saint/head coach Joe Gibbs was here during his second stint, Alexander was used as an extra offensive lineman during certain packages. These days, the 29-year-old is filling in admirably as London Fletcher’s backup at middle linebacker. If there’s a more versatile player on the current roster, I haven’t seen him.

7. Joshua Morgan, receiver – Morgan showed no signs of rust during his first playing time since last October. Not only did he finish the game with four catches for 49 yards against Buffalo, but just as importantly, he served as a safety valve for Cousins. Morgan also earned a chuckle from the media after the game when asked if he was worried about taking a big hit while trying to reel in a catch on a bobbled ball in the middle of the field.

“I don’t ever think about contact,” he said. “I’m bigger than most of the safeties and corners I play against, so I feel like I’m gonna run them over anyway.”

8. Chris Baker, defensive tackle – The large gentleman in the middle of the Redskins’ defensive line came up huge during a pivotal goal-line stand — keeping the Bills’ offense out of the endzone for six consecutive plays. Buffalo then missed a 22-yard field goal attempt, which proved to be the difference in a 7-6 affair.

9. Jarvis Jenkins, defensive end – Jenkins is trying to work his way back into the rotation after missing all of last season with a knee injury. If the Bills game was his first test, he passed it with flying colors.

10. Alfred Morris, running back – His numbers weren’t great (15 carries for 54 yards), but Morris was one of the few players on either team worth watching during the second half of an otherwise forgettable preseason game.

5. Rex Grossman, quarterback – His first pass attempt of the evening probably should have been picked off. And if it was, it probably wouldn’t have surprised anyone.

4. Brandon Merriweather, safety – Had one of the easiest interceptions imaginable hit him in the hands and still couldn’t secure the football. If a seventh-round draft pick can get the job done, you’d like to think the former two-time Pro Bowler could do the same.

3. Josh Wilson, cornerback – Buffalo’s offense seemed to target Wilson early and often, with Fitzpatrick and receiver Stevie Johnson teaming up for a would-be touchdown on Wilson that was nullified by a Bills penalty. With so many other question marks in Washington’s secondary, Wilson is going to need to step his game up or the Redskins could be in deep trouble this season.

2. Niles Paul, receiver – ‘Skins fans continue to hype this guy like he’s the second-coming of Shannon Sharpe, but the second-year player has got a long way to go before he deserves to be anywhere near that conversation. Paul was targeted five times in the preseason opener, but managed just one catch and at least two drops.

1. Brandon Banks, return specialist – Banks was targeted a game-high nine times against the Bills, and somehow finished with just two catches for nine yards. That’s not exactly the best way to prove you’re more than just a special teams player.