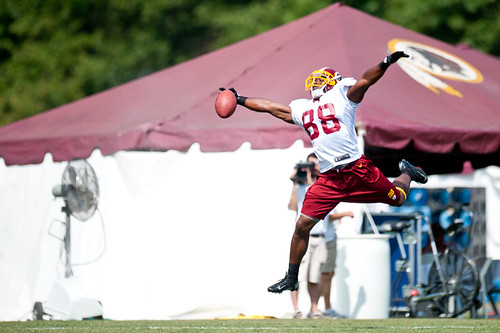 The first full week of training camp has come and gone for the Washington Redskins, which means it’s once again time to rush to judgment on all things burgundy and gold related.

1. Pierre Garcon, receiver – Look, if Larry Johnson taught us anything, it’s to temper expectations when a new guy shows up and immediately stands out. Johnson looked great in shorts and no pads because he was giving 100 percent while everyone else was slowly working their way into playing shape. Once everyone else got going, Johnson was unable to take his game to another level.

All that being said, Garcon looks great so far. His athleticism is undeniable — so much so that one local media member (who shall remain nameless) admitted to me that he’s developed a bit of a man crush on Garcon.

2. Brian Orakpo, linebacker – You know a player is good when he does something as simple as a swim move during routine 11-on-11’s and Redskins fans get giddy. Of course, if Orakpo is able to expand his pass-rushing abilities this season, there will be plenty of cause for celebration locally.

3. Robert Griffin III, quarterback – I’m not even going to talk about Griffin’s cannon of an arm. No, instead I’m going to focus on what he did without the football that turned heads this week. After one of his teammates fumbled the ball near the goal line, RGIII took it upon himself to race down the sidelines at top speed to track down the defender,  linebacker Bryan Kehl, who thought he was going to score an easy 95-yard touchdown.

Most quarterbacks would have shrugged off the play and moved on to the next one, but Griffin isn’t most quarterbacks. So he took off in an all-out sprint for 60 or so yards — just to let opposing players know he’s not the type of player who gives up on a play. This is why this town has already fallen head over heels for the guy.

4. Leonard Hankerson, receiver – Since camp started, Hankerson has picked up right where last season ended — catching everything thrown to his side of the field and forcing his name into the discussion in a crowded stable of pass catchers.

5. Brandon Banks, return specialist – If Banks is going to stick around, he’s going to have to prove once and for all that he’s more than just a special teams player. Well, so far so good for the youngster who got the crowd of ‘Skins fans fired up Tuesday afternoon by hauling in a one-handed catch on the side of his helmet.

6. Perry Riley, linebacker – The more he plays, the better he gets. Riley has always had a nose for the ball, but know he’s been in the lineup long enough to where he’s no longer relying on instincts and adrenaline.

7. Richard Crawford, cornerback – Aside from Griffin, Crawford has been the team’s best rookie during the first week of training camp. With two interceptions already, he’s making players on both sides of the ball take notice of his strong start.

8. Trent Williams, left tackle – For as good as Orakpo has been thus far, Williams has done an admirable job of keeping him away from the quarterback. Their battles have been one of the most enjoyable aspects of camp to this point — which is good since the rest of the offensive line is a work in progress at the moment.

9. Evan Royster, running back – While no one has run away with the job thus far, Royster seems to have taken a slight lead over Roy Helu Jr. and the rest of the folks in the backfield competition.

10. Graham Gano, kicker – Admittedly, the kickers haven’t had many opportunities during the first seven days to stand out, but Gano converted six of seven attempts Tuesday afternoon — including three from over 50 yards.

Honorable mention: Madieu Williams, safety – With LaRon Landry and Oshiomogho Atogwe gone, the Redskins must hope that someone — anyone — rises to the challenge and locks down one of the safety jobs. Well, Williams has done as well as anyone in the secondary and seems to have an inside track on a starting role.

5. Kirk Cousins, quarterback – While RGIII has inspired more than his fair share of cheers from the ‘Skins fans in attendance, Cousins’ performances have been much more uneven. One play, he looks great. The next, he looks like a rookie. As far as third-string quarterbacks go though, there’s still plenty to like.

4. Cedric Griffin, cornerback – Out of the half dozen new faces in the secondary this offseason, he’s been the one who appears to be struggling the most.

3. Chris Cooley, tight end – The artist formerly known as Captain Chaos has been a mainstay in Washington for nine seasons now, so it’s easy to forgive a few not-so-great practices. That being said, Cooley can’t be thrilled coughing up the football on back-to-back days.

2. Brandyn Thompson, cornerback – It’s never a good sign when the only time people notice you is when you’re getting burnt.

1. Jammal Brown, right tackle – At this point, I’ve got to assume he’s officially embraced the role of Malcolm Kelly. While all of his teammates are busting their tails and preparing for another grueling season, he’s nowhere to be found and there’s no timetable for his return.