catching up with santana moss 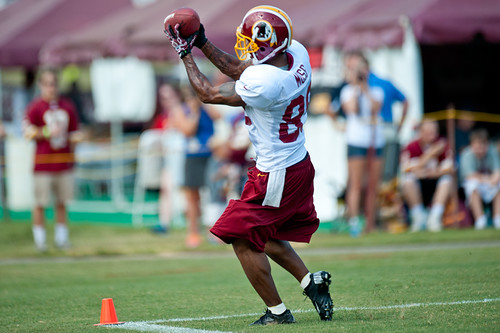 Each offseason, the Washington Redskins do their best to bring in a handful of new players in an effort to help the team turn the corner to respectability, and yet, once the season begins, those players become less relevant while a few key veterans remain the focal points.

Receiver Santana Moss definitely fits into that category. He’s watched as the team has brought in everyone from Antwaan Randle El and Brandon Lloyd to Pierre Garcon and Joshua Morgan to bolster this offense, and yet, he’s the guy who continues to carve his name into the franchise’s record books.

Last season though, Moss had trouble staying healthy and ended up with his worst numbers since coming to Washington. But before anyone rushes to write off the 33-year-old, he’s dedicated this offseason to proving his doubters wrong and showing skeptics there’s plenty left in the tank. With that in mind, I caught up with the 12-year veteran during training camp.

You look noticeable slimmer out there these days. What made you want to lose some weight during the offseason?

“Yeah, I’ve dropped 15-20 lbs. because I ate better and worked out,” he said. “I just went back to the basics, man. I went back to Miami and got into the grind. I was motivated by looking at the new guys out there doing what they’re doing. I was heavy. I was too heavy, man. I didn’t look like myself anymore. I was over 200 lbs., and I know that’s not my weight. I know I’m the best I can be when I’m around 195 lbs.”

Do you think you’ll have a little more explosiveness this season because of how you’ve changed your body?

“My explosiveness is showing already,” Moss said. “I mean, I had it when I was heavier, but it was harder to maintain everything. When you’re heavy, you can’t maintain yourself as well during games. That’s basically what I wanted to get out of this offseason.”

How frustrating was last season for you? It wasn’t a lot of fun for anyone on the team, but it seemed like at times you took it as hard as anyone.

“It was frustrating for me because I felt like I wasn’t myself,” he said. “I got hurt and that threw everything off, but that’s stuff you’ve got to deal with in this game. Life is like that. You’re gonna have better years though, so all you can do is put it behind you and move on.”

During camp you’ve been lining up pretty regularly in the slot. Can we expect some Wes Welker-type production from you this season as you sneak across the middle?

“I can never say I’m sneaking anywhere, man,” Moss said. “As long as I’ve been here, I’ve always been accounted for. Defenders find their way to me. But like I’ve said before, I’m just thrilled to be out here with more guys who can help me do what I do. I’ve been here for years when I was the only threat, but now we’ve got more to this offense.”

A lot of players have come and gone during your seven seasons in Washington. With that in mind, what’s your mindset when dealing with newly-acquired players like Pierre Garcon or Joshua Morgan?

“They’re in my room, so I’m going to get to know them regardless,” said Moss. “We’ve got to go out and work and eat together, so when it comes to what we do I’m going to get to know you. That’s just how this league is — there’s a revolving door. You just hope you can stay longer than most people. That’s why I try to take care of myself and do everything I can to better myself. As long as I do that, I’ll be okay and I can’t worry about the rest.”

How fortunate do you feel you’ve been to stay in one place for so much of your career?

“Man, everyone should feel fortunate to have a chance to come out here and compete for a job,” he said. “I know I am, and that’s why I don’t take nothing for granted.”

Talking about weapons and not taking anything for granted, what has that rookie quarterback shown you so far?

“It’s a true blessing that we have him,” Moss said. “We can’t feel like everything is gonna happen over night, but the more and more we’re all out here together, we’re going to get better and let him grow into the guy he’s going to be for us.”

When it comes to Robert Griffin III, there’s an obvious excitement in town. Does it feel that way for the players at all?

“We have the Heisman Trophy winner now as the quarterback and that’s the position we’ve been trying to fill for years, so there’s a different type of buzz here,” Moss said. “But I feel like, at the end of the day, we can only let whatever is going to happen happen. It’s not smart to go out and say, ‘This is what we’re gonna do this year or this is why he was brought here.’ As a team, we need to do the things we can do to help him be the quarterback of this team. We can’t just go out there and say ‘Starting tomorrow we’re going to be a record-breaking offense’ and go out there and shock the world. We’ve got to give it time and let everything happen.”

Every offseason Redskins fans get fired up and tell themselves that ‘This is our year.’ Unfortunately, that hasn’t always worked out. Why is this year different?

“Honestly, every year you have different expectations,” said Moss. “For you or someone else to sit back and say that we’re gonna play like we did last year, you’d be selling yourself short. Every year you have a chance to be better and that’s all we can really ask for. Regardless of what you go through in life, you’ve got to push yourself for more. Push for better. Even outside of football or whatever it is you do, you always want to get better. I feel like the last few years we haven’t had much, so there’s no better time than now to want us to get better. We all want something different, and I feel like it can happen this year.”

Now that head coach Mike Shanahan has been here a while and you’ve had some time to really get to know this offense, what is it about this system that you’re such a big fan of?

“Last year, I feel like, at times, we were explosive, man,” he said. “And I feel like every year we’re getting better and better — especially once you learn this offense. It’s crazy what kind of numbers you can put up as a receiver or running back in this offense. It’s unbelievable because there’s so much opportunity for everyone out there. That’s what I’m looking forward to. If we all play together in this offense like we should, it’s gonna be lights out. But we’ve got to take our time and put in the work.”

Do you have any goals for yourself this season?

“Never set goals,” Moss said. “Never set goals. There’s so much you can accomplish, why try to put a limit on what you can do? I like to just go out there and achieve all of it.”