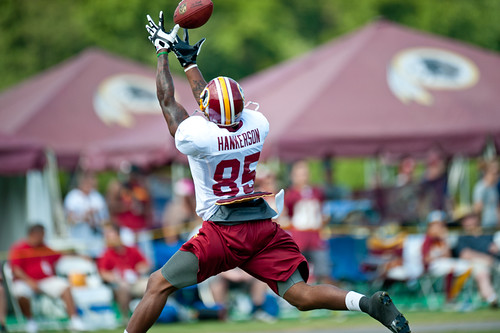 The Washington Redskins officially kicked off the most highly-anticipated training camp of the Mike Shanahan Era late last week.

That’s what happens when a franchise that has lacked a true franchise quarterback for more than 20 years trades away a stack of high-draft picks for the right to select Heisman Trophy winning quarterback Robert Griffin III.

So while ‘Skins fans are typically quick to proclaim “This is the year the Redskins finally turn the corner and become respectable,” there’s actually a legitimate reason for cautious optimism in Ashburn these days.

For more than a decade now, Washington has been known as a defense-first franchise. Well, if RGIII is as good as advertised, this might finally be the year the offense is worth tuning in for as well.

With that in mind, I headed out to Redskins Park with my trusty camera to see first-hand how the new-and-improved Redskins look.

And for those interested, here is a link to my favorite photos I was able to capture during my first trip out to see training camp.