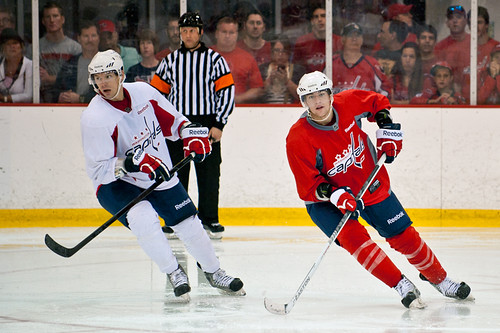 The Washington Capitals hosted more than 40 rookies and undrafted free agents during the 2012 Prospect Development Camp at Kettler Capitals Iceplex from July 9-14.

The week-long event, which was free and open to the public, gave the team’s coaches and front office a first-hand look at players hoping to one day fulfill their dream of playing in the NHL.

In addition to seeing highly-touted players such as first round draft picks Filip Forsberg and Tom Wilson for the first time, it also provided an opportunity for less-heralded players such as T.J. Syner and Gregory Miller to make an impact as well.

In fact, both of those players scored during the final scrimmage of development camp — with Miller’s tally coming in the final minute of play and Syner netting the overtime winner for the Red Team in a 4-3 victory over the White Team.

While none of these players will likely make the Capitals this season, the camp still featured a standing-room only crowd throughout the week. Even if this is the leanest time of the year for the world of sports, that’s a testament to the local fanbase.

For those interested, here is a link to my favorite photos I was able to capture during the final day of this event.