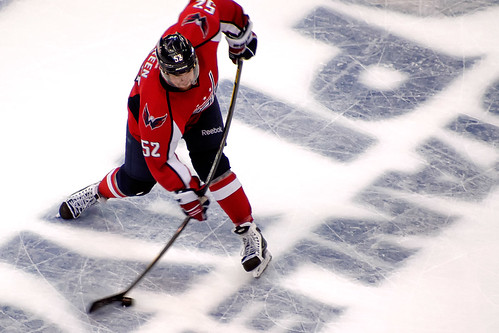 The signing comes just 24 hours after Green declined the team’s qualifying offer of a one-year contract worth a reported $5 million, and signifies a commitment to an oft-injured player who was once hailed as a building block for the rebuilding franchise.

“We are pleased to re-sign Mike Green to a new contract,” said McPhee. “Mike is one of the best young defensemen in the National Hockey League and is just entering his prime. He will continue to be a key part of our team moving forward.”

Via the press release sent out by the team:

The Calgary, Alberta, native has collected 251 points (82 goals, 169 assists) and a plus-62 rating in 398 career NHL games, all with Washington. He is one of just two active defensemen (Erik Karlsson) in the league to have registered a 70-point season and is the only active defenseman to have recorded two seasons of 70 points or more. Since the 2007-08 season, Green ranks fourth among NHL blueliners in points (236), second in goals (79) and his 0.77 points per game lead the league.

The 6’1”, 207-pound defenseman is a two-time member of the NHL First All-Star Team and is a two-time Norris Trophy runner up. He was named to his first NHL All-Star Game in 2010-11 and was a finalist in back-to-back years (2010 and 2011) for the NHL Foundation Player Award, which is given to the player who applies the core values of hockey – commitment, perseverance and teamwork – to enrich the lives of people in his community.

Green currently ranks seventh all-time in points by a Capitals defenseman and sixth in goals. His six overtime goals rank second all-time in Capitals history behind only Alex Ovechkin (12) and his plus-62 rating ranks tied for 12th. He is one of only three Capitals blueliners to have recorded 70 or more points in a single season (Larry Murphy, Kevin Hatcher and Scott Stevens) and one of just two defensemen to have scored 30 or more goals in a single campaign (Hatcher).

Look, even Green’s most vocal critics have no issue admitting he’s been one of the league’s most productive offensive defensemen. Anytime he steps onto the ice — especially on the powerplay and/or in overtime — Green is capable of putting the puck in the net.

But Green is a polarizing player because a.) critics view him more as a forward lining up as a defenseman that a capable and dependable blue liner and 2.) over the years he’s had more and more trouble staying in the lineup on a consistent basis.

Case in point: over the last four years, Green has missed an average of 26 games per season. Bigger picture, he’s played a full 82-game season just once in his seven-year career.

So while Green has been one of Washington’s most consistent performers during his time with the Capitals, he’s not exactly someone who can be counted on to be healthy for any length of time.

In a lot of ways, Green is like Redskins tight end Chris Cooley. Both are fan favorites who won over the locals by becoming two of the top players at their respective positions, but both have had little luck staying healthy over the last few seasons.

Can their injuries be chalked up to bad luck? Are their bodies breaking down? Will they be there when their teams need them most?

These are the tough questions the Capitals and the Redskins must face when deciding whether or not to continue to build around Green and Cooley.

That’s not an unreasonable pay increase for a player with Green’s resume … as long as he’s healthy. But that deal looks a lot less favorable if Green’s health takes a turn for the worse.

*In fact, Laich, Carlson and Alzner have played in all 82 games each of the last two seasons, even though each is paid significantly less than Green.

Just as troubling, Green’s number over his last 81 games are a lot less impressive than the statistical output fans were used to seeing from him. Over the last two years, Green has just 11 goals and 20 assists for 31 points — which would have placed him in a tied for 40th among all NHL defensemen. And that’s two year’s worth of production, we’re talking about.

At the end of the day, Green’s health will determine once and for all if this deal is a wise move or not. The team is clearly banking on him getting healthier as he gets older — as evident by an average annual salary that ranks behind only Alex Ovechkin and Nicklas Backstrom.

They’ve gone “all in” on Green. Now Caps fans have to hope he’s able to reward the team’s faith and once again become on the the top offensive defensemen in hockey.