draft weekend a success for capitals 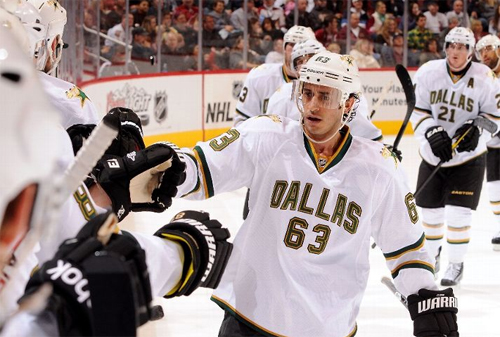 For one reason or another, more than a few fans of the Washington Capitals seem to have an issue with general manager George McPhee.

Some people look at the team’s spotty record of drafting players outside of the first round and suggest McPhee is only capable of identifying top-tier talent. Some look at past trades and free agency signings and, with the benefit of hindsight clearly in their favor, nitpick just how successful those moves were.

But as is the case with most sports fans, the biggest gripe locals have seemingly had with GMGM focuses on the moves he didn’t make — namely his inability to secure the services of a true second-line center.

Plenty of names have come and gone over the years in Washington’s quest to find a competent center behind Nicklas Backstrom, but none of lasted very long. Well, the Caps are hoping all of that changes now that the team acquired center Mike Ribeiro from the Dallas Stars in exchange for Cody Eakin and a second-round draft pick.

Last season, the 32-year-old scored 18 goals and 45 assists for 63 points — which would have been second to only captain Alex Ovechkin’s 65 points on the Caps.

During his six years in Dallas, Ribeiro’s production has averaged out to 68 points in 77 games played per season. And best of all, he’s found a way to put up consistent numbers on a Stars team that struggles offensively.

Last year, Dallas ranked 22nd in the league in goals scored and had the 30th ranked powerplay, and yet, Ribeiro’s production was still respectable.

Some might ask why the Stars would trade away one of their better players for an undersized forward and a draft pick. The answer to that question likely has to do with Ribeiro having just one year left on his contract (which will pay him $5 million next season).

Rather than losing Ribeiro via free agency a year from now, Dallas opted to move the talented forward now and take what they could get for him.

From a local perspective, McPhee rolled the dice that Ribeiro can fill the team’s void up the middle, and if things work out, they can extend the 12-year veteran before the end of the season.

And if this experiment doesn’t work out, GMGM can let the Montreal, Quebec native walk a year from now and the team will then have $5 million in cap room to find someone else to get the job done.

All in all, it’s a low-risk, high-reward move for a team that desperately needs someone other than Backstrom who can effectively log minutes up the middle.

Shortly after the Ribeiro trade was announced, the Caps made headlines again with their selection of forward Filip Forsberg with the 11th overall pick in the 2012 NHL Draft.

Depending on where you looked, Forsberg was ranked somewhere between the second and fourth best player in this year’s draft. But for reasons that remain unclear, 10 other teams* passed on the highly-touted youngster

*Eight of the first 10 picks in this year’s draft were defensemen. Basically, what happened was kind of like when someone in your fantasy football league drafts a tight end two rounds too early and then a handful of other guys all go “I better get my tight end now before all the good ones are gone.” Next thing you know, people are reaching for lesser talented players simply because they saw someone else select a tight end and they don’t want to “miss out.”

Because Forsberg was expected to go in the top five of the draft, McPhee and his scouts didn’t spend much time on him leading up to the draft.

“At the table the scouts were unanimous — ‘We have to take this guy, he’s a fantastic player,’” McPhee said. “I tried to give them other options to play devil’s advocate with it but it was an easy one.

Year after year, I tune in for the NFL Draft and can’t believe how quality players seemingly always fall to teams like the Baltimore Ravens and New York Giants. Both teams have above average front offices that rank among the best in the league, so when a quality player slips on draft day they’re ready and willing to take a player other teams shied away from for whatever reason.

Considering how often those two franchises make the playoffs (and how often I curse under my breath when their draft picks are announced), it’s clear they’re doing something right. Same goes for the Capitals.

Other teams might be afraid to draft a player like Russian forward Evgeny Kuznetsov, but McPhee was more than happy to pounce on him with the 26th overall pick in the 2010 draft. Other teams might freak out when they see a run on defensemen in the top half of this year’s draft, but once again, McPhee is more than happy to stand out amongst his peers.

And chances are, a year or two from now when Forsberg and Kuznetsov are playing in our nation’s capital, McPhee’s critics will have to find someone else to focus their anger on.