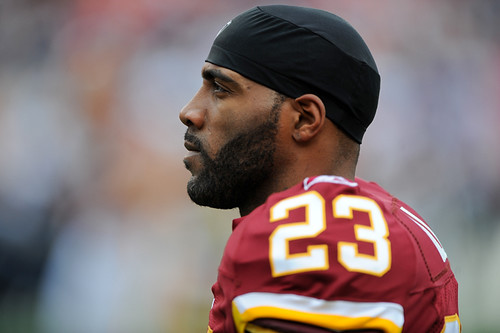 No current member of the Washington Redskins is more polarizing than cornerback DeAngelo Hall.

While some fans see him as a Pro Bowler, a team captain and one of the only players who can consistently create turnovers, others see him as “MeAngelo” — a selfish player who was run out of his two previous places of employment and who is capable of creating controversies at the worst-possible times.

The highs are definitely high with Hall — like his record-tying four interception game against Chicago or his game-winning fumble recovery for a touchdown against Dallas in the 2010 season opener. But the lows are equally low — for example, being dragged by mediocre quarterback Jake Delhomme on a 3rd-and-8 run or giving up a 30-yard catch to Dez Bryant with the game on the line on a 3rd-and-21 last season.

But for better or worse, Hall is a key member of this franchise — particularly in a secondary that is littered with question marks. While the front seven looks like it could potentially be the strength of the 2012 Redskins, the secondary appears to be a work in progress, to say the least.

Injury-prone safeties LaRon Landry and Oshiomogho Atogwe were let go this past offseason, and have been replaced by half a dozen candidates (including Tanard Jackson, Brandon Meriweather, and Madieu Williams). Which two safeties rise to the challenge and earn a starting job Week 1 is anyone’s guess.

In the meantime, that leaves Hall and Josh Wilson as the two most established players in the secondary. Considering opposing quarterbacks threw for 3,553 yards with 22 touchdowns and 13 interceptions last season, it’s safe to say Washington is going to need an above average year from both of them if things are going to be better in ’12.

Because so much has changed in the secondary since last season, I caught up with Hall to get his perspective on the upcoming season. Here’s what he had to say:

How’s everything been with you, man? And before we get started, how do you prefer to spend your offseason?

I haven’t talked to you since last season ended, but apparently since the last time we spoke, people are now comparing you to Charles Woodson. Can you elaborate on that story and tell me what that was all about?

“I don’t even know what that was and hadn’t even heard that story,” he said. “I think I made the comment maybe a week ago about being used kind of like Charles Woodson and the way the defense has kind of evolved.

“You know, when ‘Los [Carlos Rogers] and K.B. [Kevin Barnes] played the nickle here it was a little different,” Hall continued. “Now that [defensive backs coach] Raheem [Morris] has come here, he’s changed some of the techniques and made it more of a playmaking type of position. I’m definitely gonna have a chance to make a lot of plays, similar to C-Wood.”

You mentioned Raheem Morris. Can you talk a little bit about what he’s brought to the table since he came to town?

“Shit, Raheem brings everything, man,” he said. “He brings swag. He brings confidence. A different set of eyes on the defense to let us know where we were weak at and areas where we need to get better at. As a defense, we finished 13th last year. I believe at one point we were in the top five range, so he’s kind of opened our eyes and helped us reinvent ourselves a little bit. Sometimes that’s what you need — an outside source to come in and switch things up a little bit for the betterment of the team. And that’s what we feel like he’s done.

“As a defensive backs coach he keeps the room fun,” Hall continued. “But at the same time, he’s very demanding of us. We definitely love having him around and I hadn’t really ever been around him until he got here. I’ve spoken with him a lot of the last eight or nine years and I always wanted to play for him, but having him here now — I don’t ever want to play for another DB coach.”

Who is a better trash talker — you or Morris?

“Oh, him. Hands down,” he said. “He kills me. It’s nice to have another trash talker around though because I don’t even have to talk anymore. I can just go out there and play now. I just let him do all the talking now.”

Unfortunately, that’s when our interview got cut short because one of the team’s media relations people needed Hall elsewhere. But it’s the last line that’s got me most encouraged about Hall heading into this season.

For my money, the biggest issue with Hall is he’s too honest. The guy says whatever is on his mind — whether it’s admitting he had a few too many beers the night before or he’s having a meltdown after a particularly frustrating loss to a rival on Monday Night Football.

As he came off the field after that loss in Dallas last season, it was clear to anyone just how unhappy Hall was with himself after allowing Bryant to make that pivotal 3rd down catch (not to mention the ill-advised 15-yard facemask penalty on Hall that moved the Cowboys even closer to the winning score).

Before he even made it into the locker room, Hall was so overwhelmed with emotion after feeling like he let his teammates down that he slammed his shoulder pads to the ground and stormed off.

Just five minutes later, the media was allowed in the post-game locker room. Naturally, everyone headed straight for Hall. If he was a different player, maybe he would have went to the showers to give himself some time to cool off. Instead, he went off on an profanity-laced tirade directed at anyone and everyone he crossed paths with that night.

If he truly believes that Morris puts him in a better position to make plays and, just as importantly, that all he has to do is go out and play football while leaving the talking to others, this really could be a breakout year for Hall.

And Hall isn’t the only person excited to have Morris join the Redskins.

“Well scheme wise, anytime you bring in a coach, there’s always different ideas,” said head coach Mike Shanahan. “You know, Raheem’s been in four-man fronts for about most of his career, some of the best. You take a look at Tampa Bay and you take a look at the coaching staff that they had from Monte Kiffin, to obviously Raheem, to Mike Tomlin. Their four-man front was probably as good as there has been for a lot of years, the last 10-15 years. He brings a lot of ideas from what he’s done in the past to what we’re doing now. There’s always different ideas that you toss around. But basically we have our same scheme, and he does a heck of a job coaching and getting the best out of players.”

With Hall talking about playing more nickle corner this year, Shanahan was asked to elaborate more on the team’s plans for him this season.

“There’s a possibility that he could play more roles,” Shanahan said of Hall. “He loves cornerback, he also can play the nickel, he can play the dime. Last year we had him just out on one side and we had Kevin Barnes inside so we decided to change a number of players and get more flexibility inside. Especially, with all of these three, four, and five wide receivers, you have to have the ability to have more than five defensive backs on the field at one time. Count your safeties; you can have six and sometimes seven. We’re a lot more flexible than we have been in the past. With these OTA’s structured the way it is, we get a chance to teach it the right way as well.”

Like I said earlier, there are still plenty of question marks in the secondary heading into the season. But if Hall really can make more plays while talking less, I think it’s safe to say more ‘Skins fans will truly embrace the 28-year-old.