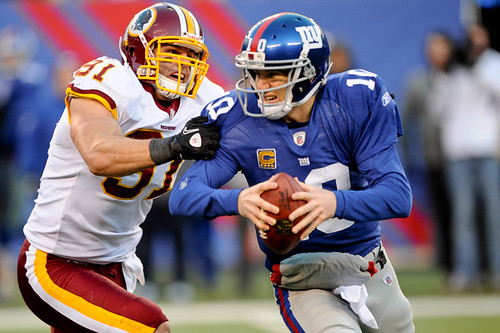 Ryan Kerrigan is the epitome of a blue-collar worker.

Coming out of college, he was never considered the biggest, strongest or fastest at his position, but the Washington Redskins saw enough from the Purdue standout to select him with the 16th overall pick in the 2011 NFL Draft.

Of course, as we all know by now, the Redskins were rewarded for taking a chance on Kerrigan.

Not only did the outside linebacker give opposing offenses someone other than Brian Orakpo to worry about when it came to rushing the passer, but the 23-year-old was the only Redskins player who never missed a play in ’11.

With 7.5 sacks, four forced fumbles and a monumental defensive touchdown in his first-career NFL game, Kerrigan gave local fans a lot to love in his inaugural season. With that in mind, I caught up with the youngster recently to see what he’s got planned for year two and here’s what he had to say:

How’s everything coming along during these OTAs?

“You know, we’re learning a lot and we’re getting better every day,” Kerrigan said. “That’s the point of the OTAs. There’s not a lot of pressure, because you’re not preparing for a game, but at the same time, this is when you can hone in on specific skills and try to work on whatever weaknesses and enhance your strengths from last season. This has been good for us so far.”

Okay, that’s fine. But I’m not worried about the Redskins as a whole right now. I’m asking about you, personally. This is your second season, which means you’re not a rookie anymore who is out here trying to keep your head from spinning. What’s your mindset these days — are you care free and just enjoying the game?

“I wouldn’t say it’s care free, but it’s definitely a lot lighter mentally than it was last year,” he said. “I know what I need to do and that allows me to play a little faster and just play a little more open.”

From where I’m standing, with Jarvis Jenkins back in the mix and everyone having another year in this defense, it appears you guys have the potential to boast a pretty nasty front seven. Would you agree?

“Yeah, absolutely. We’ve got the pieces because the organization has invested a lot with guys like [Adam] Carriker, [Stephen] Bowen and [Barry] Cofield as well, so we’ve got a chance to be a great front seven. We’ve just got to go out and work every day and put it all together out there on the field.”

How did you spend your offseason? I know you were in town when the franchise unveiled the throwback uniforms, but did you get to take a nice vacation or anything like that during your time away from the game?

“Not really, I actually had some school work to finish up,” Kerrigan said. “So I was back at Purdue taking classes last winter and through the spring.* I’m glad to get that done, but I was able to train out there and now I’m back to training here.”

*Of course he spent his offseason taking college classes rather than doing anything fun and exciting. The guy is a cyborg. Well, either that or the whole blue-collar mentality really is accurate.

So how did you get roped into the ceremony to unveil the throwback jerseys?

“Well, Mr. Snyder asked me to do it,” he said. “I figured if the owner asks you to do anything like that it’s obviously an honor, so I was glad to do it.”

What you’re saying is you’re not going to be the guy who tells the owner no, huh?

(Laughs.) “Absolutely not,” he added.

For a while now, the defense has been the strength of the Washington Redskins. This offseason though, there’s a new guy on the other side of the ball who has gotten the locals pretty excited …

“Who is that,” Kerrigan said with a laugh.

What have you seen from that new quarterback so far?

“He’s been very impressive,” he said of Robert Griffin III. “He’s as good as advertised in terms of his athleticism, but what I see is a quarterback. I see a guy who can throw the ball and make good decisions that the best guys can make. His 4.3 speed is just a little cherry on top of all his other quarterbacking skills.”

Look, we all know he wants to be a pocket passer first and foremost, but how do you bring down a guy like that if it’s just you and him in the open field?

“I mean, it’s definitely a task that I’m glad I don’t have to do in live action because he’s probably going to make a lot of guys look stupid,” Kerrigan said. “But he’s a good athlete and I’m glad he’s on our side.”

You didn’t miss a single snap all last season. How do you follow that up and what goals do you have set for yourself this season?

“All of my goals are team goals,” he said. “I want us to get to the playoffs. I want us to win. I don’t want to go 5-11 again. That’s our goal — to win. I mean, we’ve got the potential. We’ve just got to come out here during these practices and hone in on our skills every day and do the little things more consistently.”

Seemingly every offseason, ‘Skins fans talk themselves into the same mantra — this year will be different. This is the year the Redskins finally turn the corner and put together a memorable season.

Washington then gets off to a hot start — going 3-1 in September — and everything looks great. Of course, after the first month of the season, the Redskins come crashing back down to earth and the team typically ends up with yet another top 10 pick in the draft.

Because Griffin is a rookie and will therefore experience the same growing pains that all first-year players go through, and because of questions surrounding the team’s offensive line and secondary, I have done my best to encourage locals to proceed with cautious optimism.

But at the same time, with talented young players like Kerrigan, Orakpo as Griffin the foundation, it’s easy to see that things are finally starting to come together for a once-proud franchise.

If everyone can stay healthy and the Redskins can catch a few breaks, there’s no reason to think this team can’t follow in the footsteps of the Capitals and Nationals and finally become respectable once again.

Does that mean the franchise is a lock for 10 wins this year? Probably not.

But at least fans can tune in on Sundays knowing the Redskins actually have a chance to become competitive, thanks to blue-collar cyborgs like Kerrigan.