fred davis has something to prove 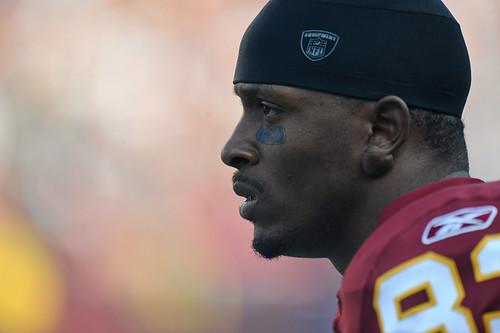 There wasn’t much to like about the Washington Redskins’ offense in 2011.

For every positive — such as the emergence of rookie running backs Roy Helu Jr. and Evan Royster — there were countless negatives — like turnover-prone quarterbacks, an injury-riddled offensive line and receivers who struggled to get any yards after a catch.

If that wasn’t bad enough, the Redskins then lost tight end Fred Davis and left tackle Trent Williams for four games after they both failed multiple drug tests.

Both are considered cornerstones of Washington’s offense, and yet, neither was available to play for the final four games of the season because of the dumbest reason imaginable.

Davis, in particular, was in the midst of a breakout year — with 59 catches for 796 yards and three touchdowns over the first 12 games of the ’11 season — before the league handed down his punishment.

Plenty has changed with the burgundy and gold since Davis last took to the field, so I caught up with the 26-year-old recently to talk about the suspension and much more. Here’s what he had to say:

Okay, be honest with me, you didn’t want the Redskins to draft Robert Griffin III. You wanted your boy Matt Barkley to come out this year so you could catch passes from a USC guy, didn’t you?

(Laughs.) “Ain’t nothing wrong with a little USC Trojan love,” Davis said. “But I’ll take RGIII, man. He’s definitely a great player and has a lot of talent. He’s got a good head on his shoulders too.”

I know it’s early, but what have you seen from Griffin so far?

“I mean, the things that they say are all true,” he said. “He’s made some incredible passes over the last few weeks that definitely stand out to me, and everything else — the running and his speed — that’s a given with him. His passing and understanding of the game, you can already see how much he’s studying and working. And you see him in the film room too. He’s working hard to get better every day.”

I don’t think I’m going out on a limb by saying you were probably this team’s number-one weapon last season. If Griffin is half as good as advertised, what does having a legitimate quarterback like that do for your game?

“It can do a lot for me,” Davis said. “Just to have someone who can put the ball in places to give me opportunities, like with Alge Crumpler and Mike Vick. A lot of times a young quarterback who is coming into the league needs an outlet to dump it off too, and that can be the tight end. And we’ve also got more weapons now, with Santana [Moss] coming back and losing some weight. He’s looking good. We’ve added Pierre [Garçon] and Josh [Morgan]. I think we’re gonna be good.”

Before we get too far ahead of ourselves, we need to talk about how last season ended. How difficult was it to be forced out of the lineup because of a bad decision?

“Oh, it was tough, man,” he said. “You know, it’s definitely a lesson learned and it’s something I’ll never do again. I never want to have to go through anything like that experience again. During the process, it was tough not being there for my teammates.

“But now, it’s all been forgotten about and it’s water under the bridge,” Davis continued. “They know it’s not something I’m going to do again and that I’ll be there for them.”

What did you do on gamedays during the suspension?

“I was working out and watching the games at the house,” he said. “It was very boring, and it was weird. But honestly, it sucked because I knew I could have been out there playing and helping my team. It felt like my rookie year when I knew I could play, but I couldn’t get out there on the field. It sucked just watching it on film and knowing the areas I could help them in.”

“I definitely feel like I can build off of last year,” Davis said. “After last season, I feel like people are going to expect more from me. Not only that, but opposing defenses are going to expect more too, so I’ve got to be on my game even more. So I’ve got to become more of a total player in areas I’ve never had to focus on as much before. Mentally, it’s going to be a challenge, but at the same time it’s a great experience to go through when you grow as a player.”

What’s your relationship like with Chris Cooley? For some reason, there are a number of fans out there who feel like the team should only utilize one of you rather than try and establish depth. For whatever reason, the idea of you two coexisting and working together seems unimaginable to these people.

“We’re good. We’re cool. Chris is a really good guy and we help each other out all the time when we see something out on the field,” he said. “We’ve always been like that. There’s never been any hard feelings or anything like that. This is a young man’s game, so we all know that at some point we’re all going to have to take a step back because of injuries or whatever.”

With you coming off a suspension, Cooley coming back from an injury and Niles Paul trying to convert from a receiver to a tight end, it really does seem like you guys all have something to prove this year, right?

“Yeah, we definitely do,” Davis said. “Niles is definitely a talented player and he’s a smart guy too. He can make a lot of plays athletically, so it’ll be good to see all of us out there working together. It’ll be fun to see what happens.”

There were times last year when the Redskins would run a bootleg and as the quarterback rolled out of the pocket, Davis was wide open on the backside of the play. Unfortunately, neither of the two quarterbacks involved had enough of an arm to get the ball to Davis.

Robert Griffin III, of course, is no Rex Grossman or John Beck. In addition to being the most electrifying player in the 2012 NFL Draft, he’s also got a cannon for an arm and even though he’s only been on the field for a handful of snaps for Washington so far this offseason, it’s already crystal clear that he’s more than capable of connecting on a play like that.

So when a guy like Davis says something like, “It’ll be fun to see what happens,” that’s immediately where my mind turns to. For the first time since Mike and Kyle Shanahan came to town, they appear to have a quarterback who can actually run the plays this offense is built around and that definitely gives reason for excitement.

And if that’s not reason enough to keep Davis out of trouble from now on, then the Redskins will be better off without him.

Of course, if ‘Skins fans were going to be subjected to another year of Grossman and Beck, then Davis and Williams wouldn’t have been the only two guys in town looking for a way to numb the pain. Let’s all be thankful that it didn’t have to come to that.