getting to know pierre garçon 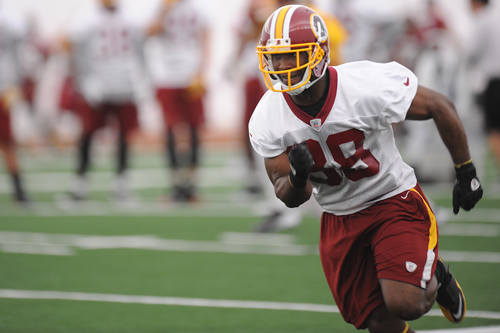 During the 2009 and 2010 seasons, receiver Pierre Garçon caught a combined 114 passes for 1,549 yards with 10 touchdowns for the Indianapolis Colts. He wasn’t the go-to weapon, but he put up respectable numbers while catching passes from a first ballot Hall of Famer.

But before anyone thinks he was simply a mediocre receiver who benefited from an elite quarterback, take this into consideration — Garçon’s numbers actually improved last season without Peyton Manning. While catching passes from a collection of nobodies, the 25-year-old finished the season with 70 catches for 947 yards and six touchdowns — all of which either set or tied career bests.

This might explain why the Washington Redskins rewarded the fifth-year pro with a five-year contract worth $42.5 million (with $20.5 million guaranteed, including an $11 million signing bonus), despite the fact that he’s only finished a game with 100 yards receiving six times in his four NFL seasons.

“You can see Garçon, you know, he’s a big time receiver,” said head coach Mike Shanahan. “You can see his power, his strength, his quickness, his speed since he’s been here. It’s very, very obvious.”

By the time Garçon signed with Washington, the Redskins had already made their bold move to land the second-overall selection in the 2012 NFL Draft to ensure they landed quarterback Robert Griffin III. Surprisingly, Garçon said that move had little to do with his decision.

“It was not much of a factor,” he said. “It was more of they wanted me to be on their team and they wanted me to be a part of this organization, wanted me to help them get a Super Bowl victory and stuff like that. I knew both teams were going to get good quarterbacks, but as a player, it doesn’t matter what quarterback, you just need to go out there and do your job and play your game. ”

Garçon was then asked to elaborate on how the decision was made to sign with Washington.

Think about that for a moment — there aren’t many other professions out there, where you wake up one day with absolutely no clue who you’ll be working for and where you’ll be calling home.

“It was overwhelming, you know,” he said. “You never really know who wants you, but it is overwhelming and it’s kind of stressful cause everybody’s calling, you’re trying to please everyone and give everyone a chance and try to talk to everyone, but it’s pretty tough to do. You just have to be friendly, it’s your decision and just live with it.”

Of course, the Redskins have been accused of overpaying mediocre talent via free agency on more than one occasion over the years. How much pressure does Garçon feel to avoid joining that list?

“I just, when I go out there and play, I try to play hard every time and make a play every time,” Garçon said. “Every time we’re out there on the field, I’m put out there to make a play so that’s what I really do every time I get out there on the field, even if its preseason or when I was backing up [former COlts receivers] Marvin [Harrison], Reggie [Wayne], or in practice you know things like that. It was just going out there and making plays. The more plays you make, the team gets better, and they see the better you are as a player and as a team.

“At the end of the day, its football,” he continued. “You know, anytime you play in the league, there’s pressure. If you’re a sixth-round pick or if you’re a first-day free agent, you know it’s pressure no matter what. Everybody has their own pressure. Free agents just have to go out there and make plays, do this and give it your all every time you play and that’s all you can do. There’s no real pressure.”

While he might not have signed with the Redskins simply because of Griffin, it’s still got to be exciting to see such a young and talented quarterback in the lineup, right?

Anyone who watched Washington’s stagnant offense last season knows just how bad guys like Jabar Gaffney and Donte Stallworth were at getting yards after the catch. This is one of the areas where Garçon feels he’ll definitely help his new ballclub.

“I just like making plays, so every time I get the ball in my hands, I want to make the best play or biggest play I can,” he said. “Just going down isn’t the best thing sometimes. It’s the smartest thing to do, but sometimes you have to go out as a competitor, get more yards and push yourself to the limit. Do what you can for the little opportunity you have with the ball.”

Considering Garçon allegedly played his college ball at a place named Mount Union, it’s fairly incredible that he’s even made it to this point.

With that mindset, it should come as no surprise that Garçon isn’t overly concerned with where his coaching staff wants him to line up or where he ranks on the team’s depth chart.

“We have a good receiving corps,” he said. “We have a leader in Santana Moss. You know, he’s been here for a while. He’s been in the league a long time. He’s a great player. We’ve got Josh [Morgan] and [Anthony] Armstrong. Those guys are very fast and athletic. And we have a lot of young guys that are very fast as well and athletic, we just have to find a place for them on the team and get going.”