getting to know josh leribeus 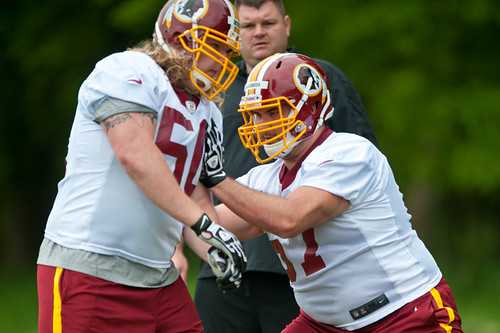 In the third round of the 2012 NFL DRaft, the Washington Redskins selected offensive lineman Josh Leribeus out of Southern Methodist University.

Considering the decade or so of neglecting the offensive line the previous regime was known for, it was a pleasant surprise to see the franchise use it’s second-highest pick in the draft on an area that no team can ever have enough depth at.

While Leribeus wasn’t exactly a household name coming into the draft, the front office viewed him as a great fit in this zone blocking scheme. Just as importantly, they saw him as a versatile player who could slide into the lineup as either a guard or at center — which is huge considering how many injuries the Redskins have suffered on the offensive line over the last few seasons.

“It’s hard to find a guy who can do both,” said head coach Mike Shanahan. “What I mean by that, some times you find a guy that’s a Pro Bowl center, and you move him to guard, and he can’t play. And a lot of guards, they can’t play center. They don’t have the quickness. He’s got both and that’s one of the reasons why we had him targeted early.”

Earlier in the week I had the chance to chat with Leribeus about where the team plans to use him, working with the new face of the franchise and playing with a mean streak. Here’s what he had to say:

How has the transition from the college game to the pros gone for you so far?

“It’s been good,” Leribeus said. “[Offensive line] coach [Chris] Foerster has been great. The transition has been quick, but that’s just how it is. You just go back to the team hotel and study a little bit. Right now it’s just getting the technique stuff and assignments down, but it’s coming along.”

Okay, be honest, how much is your head swimming these days?

(Laughs.) “Today wasn’t too bad,” he said. “Because it’s day one, I’m just getting used to the speed of everything and working on the technique adjustments.”

For those who aren’t familiar with your game, can you take a minute to tell people about your style of play?

“I’m explosive, aggressive and I’m definitely not one to finish a play early,” Leribeus said. “They’ve been having me a play a lot more center, but I’ve gotten snaps at right guard, center and left guard so far. So I’m more of a swing guy with more of an emphasis on the center position.”

Clearly this is very early in the offseason, so what are you trying to get out of these OTA practices?

“Like I said, I’m really trying to get down all of the techniques,” he said. “We’ll go over it with the offense, but obviously we’re not as quick as the defensive line is right now. But even now, it’s a lot faster once you really get after it. I figure after a few days we’ll get into a rhythm, but right now I’m just trying to get down all of the little differences between guard and center so I can be ready to go.”

You’ve already admitted you play with a little bit of a mean streak, but it’s difficult to have that mentality when there’s no contact and you’re not wearing pads, right?

“Coach Shanahan made an emphasis of no fighting,” ﻿Leribeus said. “We can be aggressive and, if anything, we can mouth off to each other, but don’t come to blows. Nothing dirty, and I’m definitely good with that. I’m not the biggest mouth out there, and besides, most people were out of breath out there anyway today since it was the first day.”

Since you’re working as his center in a lot of these drills, what do you think of Robert Griffin III so far?

“You wouldn’t expect it with the bright eyes and big smile, but he’s really like a little mastermind,” he said. “He knows what he’s doing and I think he’s probably further ahead already than most of the other people here.”

How much of a culture shock is it for you coming from a smaller school like Southern Methodist to an area like this where the Redskins are without a doubt the most popular team in town?

“At SMU we’d have like one fan come out after practice and then you get here and see the large media swarm and it’s definitely noticeable. I don’t know if it gives you extra incentive, but you know they’re there and there’s a lot more people depending on you now.”

Although ﻿Leribeus wasn’t exactly playing against NFL-caliber talent during his college career, there’s a lot to like in this highlight video. I particularly enjoyed watching the plays where SMU used him as a pulling guard because ﻿Leribeus appears to relish the chance to get downfield and hit someone.

For a guy who doesn’t exactly have the most chiseled physique in the NFL, ﻿﻿Leribeus looks pretty nimble on his feet and shows solid mobility. If he can display some of these same traits in Washington, it’s hard not to envision him throwing blocks downfield to give a guy like Griffin extra room to work with.