getting to know keenan robinson 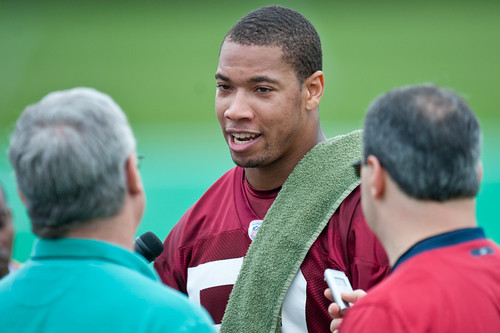 The Washington Redskins made headlines by trading a bounty of draft picks for the chance to select a potential franchise quarterback in Robert Griffin III. But the Heisman Trophy winner wasn’t the only college player the Redskins selected during the 2012 NFL Draft.

By the time the draft had concluded, Washington had nine new players — and not everyone chosen came from the offensive side of the football.

In the fourth round, with the 119th pick overall, the Redskins selected Texas linebacker Keenan Robinson.

The Omaha, Nebraska native started all 13 games as a senior in 2011, recording 106 tackles, 10 tackles for loss, one sack, one safety, 13 quarterback pressures, seven passes defensed and two forced fumbles. He was also named the 2011 Holiday Bowl defensive most valuable player.

“He’s a guy who could play both [inside and outside],” said head coach Mike Shanahan. “We like his speed. One of the reasons we drafted him is we had him at the Senior Bowl. He’s a quality young man. I just like the way he practices and handles himself. We think he can fit in well.”

Best of all for Robinson, who was a three-year starter for the Longhorns, he has a legitimate chance to earn playing time sooner rather than later with the departure of inconsistent linebacker Rocky McIntosh.

“I was happy when they drafted me,” Robinson said. “They’ve had guys like Orakpo here before me, and he’s been one of the leaders of this team. So I knew I was going to the right spot because Texas players have done well here in the past.

“As soon as I was drafted, Orakpo was telling the coaches they did a good job drafting another Texas guy,” he added. “He feels like we need more of us out here, and now we’ve got me, him and [cornerback] Cedric Griffin.”

Figuring that not everyone who cheers for the burgundy and gold was overly familiar with Robinson’s college career, I asked him to tell me a little bit about what he brings to the table on gameday.

“I think I had a pretty good career,” Robinson said. “I redshirted my freshman year and then had four good years. I had a lot of fun out there and feel like my four years on the field were well spent and helped make me a good linebacker. Now, the learning starts all over again. I feel like I’m a freshman again and I’m excited to work my way back up.

“My game is like any other linebacker,” he continued. “I try to play tough between the tackles. I’m good in pass coverage. That’s another element I try to bring to my game. I really feel like I can play sideline to sideline. As for inside or outside, it really doesn’t matter. I don’t really care where I line up. I’ve played 3-4. I’ve played in a 4-3. I really don’t have a preference, but I do have three years under my belt playing inside linebacker in a 3-4 defense.”

One of the first soundbites I ever heard from Robinson involved Griffin — with the linebacker essentially saying in the days leading up to a Texas versus Baylor game that “We know he’s good, but he’s not going to win the Heisman Trophy on our watch.”

Obviously, with the two now ended up on the same team, I was interested in hearing Robinson’s take on that story.

“Oh yeah, that’s probably something that every team said,” he said with a laugh. “I think we did alright against Baylor. He had some bad drives where they scored quickly. He had an alright game — it wasn’t his best game* because we were able to pick him off  — but they had a great team. Unfortunately we weren’t able to get the job done, but no matter what he did against us that day, he was probably going to win the Heisman Trophy anyway.”

*Griffin threw for 320 yards with two touchdowns and one interception in a 48-24 victory over Texas, Dec. 3.

Having lived in Texas for a few years, I know just how insanely passionate people can be about the Longhorns. While they were always the biggest team in town, I suggested to Robinson that Griffin deserved a ton of credit for putting Baylor on the map in the Lonestar State.

“It is a pretty big deal,” he said. “You know, Texas is still the big dog out there, but Baylor is now probably the third biggest team after Texas A&M. As for Griffin, he’s going to be great. He’s a guy who works hard, he studies really well and you can tell he’s really smart. I think the sky is the limit with him. He’s gonna come in here, work hard in OTAs, work hard in minicamp and training camp and he’ll be ready to go once the season starts.”

With Robinson already looking ahead, I asked him what he needed to do between now and the Week 1 trip to New Orleans to put him in the best possible position to succeed.

“I just need to continue to work hard, continue to do the little things I did in college and make it a habit,” Robinson said. “I need to learn everything I can from guys like London Fletcher, Brian Orakpo and Ryan Kerrigan. I need to learn from all of the guys around me and put myself in a position to help this team any way I can.”

Since Robinson brought him up, I tracked down outside linebacker Brian Orakpo to get his thoughts on one of his newest teammates.

“He’s gonna be good, man,” Orakpo said. “He’s learning. Obviously he didn’t play mike linebacker in college, but he’s evolving. He’s learning the mike and the jack and he’s gonna learn a lot from the other inside linebackers.

“I played with him for a year or so* and could tell he had a lot of potential,” Orakpo continued. “He’s a tall kid and he gained a lot of good weight. He can run really well. I mean, he’s got all of the tools to be a good linebacker — especially with the 3-4 system we run here.”

*Orakpo, as a senior, and Robinson, as a redshirt freshman, played together for Texas during the memorable 2008 season. The Longhorns, who went 12-1, were the best team to not play in the national championship game that season.

As far as I’m concerned, Robinson walks into an ideal situation here in Washington. He’ll enter his rookie season behind Pro Bowler London Fletcher and up-and-comer Perry Riley on the depth chart at middle linebacker.

Rather than being thrown into the fire on day one, he’ll benefit by learning from one of the best in the game, in Fletcher. Assuming Robinson is a solid special teamer, he’ll see action on Sundays and because of his versatility, I’m sure he’ll be provide with chances to show the coaching staff he’s up to the challenge.

And if he plays his cards right, the 22-year-old could eventually find himself as the replacement for Fletcher. But let’s not jump too far ahead before he ever steps onto the field for his first professional game.

For now, all he has to do is be less of a liability than McIntosh was and this pick will absolutely be a steal for the Redskins.