with hunter gone, change is inevitable 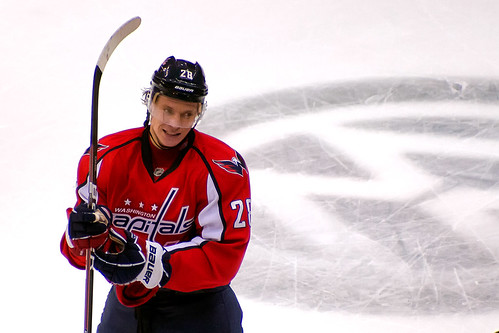 It seems like only yesterday I was pushing for the Washington Capitals to sign coach Dale Hunter to a long-term contract in hopes of providing the franchise with some stability and continuity.

After seeing everyone on the roster set their egos aside and sacrifice for the good of the team during a spirited playoff run, I looked forward to what the Caps would be able to accomplish after spending more time in this system.

And all of that was well and good … up until Hunter decided he was better off walking away from the Capitals. Citing “family reasons” the former Caps great informed the team Monday morning that he’s one-and-done in Washington.

“This was a tough decision,” Hunter said during a press conference Monday. “It was the right thing for me and my family.”

Like I said earlier, keeping Hunter was ideal for the Capitals because it meant many of the same players who excelled in the postseason would return next year and know what they were in for. Athletes crave stability. They strive for consistency.

Think back to former Redskins quarterback Jason Campbell, who seemingly had a new head coach and/or offensive coordinator each and every season of his college and pro career. How can a player like Campbell ever truly excel at the position when he’s asked to forget everything he’s learned and start over each and every season he shows up for work?

In related news, Campbell hasn’t been very good as a professional athlete.

Now, apply that to the Capitals, who will turn to yet another coach after Bruce Boudreau was fired and Hunter walked away, and you can begin to see my reason for concern.

Had Hunter returned for a sophomore season, I was absolutely on board with bringing back as many of the current cast of characters as he saw fit.

Even though I’ve never been confused for a fan of a headcase like Alexander Semin, I would have been okay with the team re-signing Semin if Hunter wanted to bring the enigmatic Russian back next year.

But now that change is inevitable, I say the franchise has no choice but to blow it up and start over. No, I’m not suggesting that it’s time to ship captain Alex Ovechkin or another building block, like Nicklas Backstrom, out the door.

Clearly I’m not the only person who thinks some of these players are in need of a fresh start elsewhere — not after the comments made by Semin’s agent yesterday afternoon.

“It was good while it lasted. With the lack of playoff success, with the direction they are going. They decided to change directions. That’s within their rights. Alex doesn’t fit into that system obviously,” Mark Gandler told ESPN The Magazine. “It just doesn’t make any sense to him. He plays, he did the best he could under the circumstances and he earned his right to be a free agent.”

Talking with folks behind the scenes throughout the season, I had a feeling that Semin’s days were numbered in our nation’s capital. More than once it was suggested to me that he’d either end up in the KHL or with a veteran team like the Detroit Red Wings, who might take a flyer on the talented winger for one last run at the Stanley Cup before their window closes, and either of those scenarios makes sense.

Regardless of where Sasha ends up playing next season, Caps fans need to know this is the best thing that could happen to the franchise. I know there are a more than a few fans out there who saw his days as a 40-goal scorer or the nights when his wrist shot actually finds its way to the net and they can’t imagine letting such a premiere player get away.

But those fans need to realize that Semin isn’t the same player anymore — even if he’s still getting paid as if he was.

This past season, Semin scored 21 goals and 33 assists for 54 points in 77 games while earning $6.7 million. That’s a substantial amount of money for a player who ranked 85th in the league in goals and 73rd in points.

Essentially, the Capitals have been paying a middle-of-the-pack player top-tier money for each of the last two seasons. This is what we in the business refer to as a bad investment.*

*And don’t give me the “But everyone’s numbers sucked under Dale Hunter” crap. If Semin plays for another NHL team next season and magically scores 40 goals once again, I will immediately apologize to all of his supporters and either a.) eat my hat or b.) buy his jersey. But when it doesn’t happen, all of the Sasha apologists can once and for all shut the hell up about a player who can only bother to get properly motivated once every few games.

This is why Caps fans should happily wish Semin the best of luck wherever he ends up and look forward to how general manager George McPhee uses that money to improve the franchise.

For better or worse, this is the dawn of a new day for the Capitals. There will be a new man in charge next season and we’ll see if he can do what the previous two coaches failed to do — namely get past the second round of the playoffs.

There will be plenty of time to speculate who the next coach will be (I hear Al Iafrate is available), but today’s not that day.

For now, let’s just thank Hunter for the job he was able to do during his abbreviated season in town and be happy that he was able to leave here with his head held high and his reputation still intact.