why the caps need to bring back dale hunter 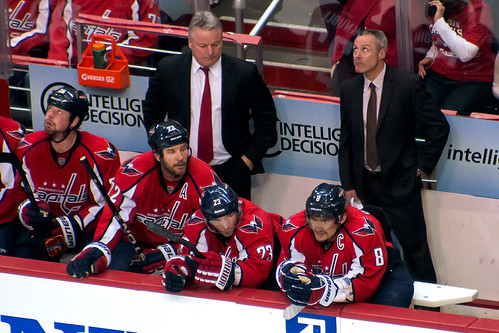 Although they lasted longer than anyone could have reasonably expected, the season has officially ended for the Washington Capitals and I can’t help but feel a little bummed out.

While it was awesome to see the same group of players who looked dead in the water for much of the regular season pulled it together and begin to peak at the right time, there’s definitely a sense of unfinished business with how the postseason came to a close.

That’s probably because the Caps played such spirited hockey for their 30-day playoff run, only to fall apart just one game away from the Eastern Conference Finals.

Heading into Game 7 at Madison Square Garden, I was chatting with my old man about what to expect when the Capitals faced the New York Rangers in the deciding contest.

Because of how the rest of the series had played out, I told him that I expected it to be another tightly-contested 2-1 game and we’d know within the first five minutes which team was going to win the game because whoever scored first was going to emerge victorious. Sadly, I was right on both fronts.

New York came out flying and seemingly caught the Caps off guard. They were the hungrier and more aggressive team while Washington struggled to survive.

So it wasn’t all that surprising when Rangers forward Brad Richards scored just 1:32 into the game. Unfortunately for the Capitals, whoever scored first ended up winning the previous six games in this series and Game 7 was no different.

And just when local sports fans were warming up to the idea of the Caps returning to the conference finals for the first time since 1998, the door was slammed shut and now everyone involved must turn their attention to a few tough offseason questions.

For starters, will coach Dale Hunter return for a second season in Washington?

It’s no secret that Hunter’s initial contract was for just one season and while it appears the front office would love to have the 51-year-old back, some people close to the situation believe he’s a long shot to return.

If that’s the case, it would be a shame.

While I fully admit that watching these players try to get on board with Hunter’s system wasn’t always pretty during the regular season, it’s clear that everyone bought in and was fully committed once the playoffs began.

Each and every night the Capitals took to the ice, you could see some of the highest paid players in hockey hustling back on defense and sacrificing their bodies to block shots. No one ever said a word about playing time or personal achievements. The only thing that mattered was winning.

During the Bruce Boudreau era, there were definitely times when the Capitals look lost and/or disinterested. There were more than a few nights (or, more accurately, early matinee games) where the team no-showed and ended up getting waxed because they looked as if they couldn’t be bothered to put for an honest effort against a motivated opponent.

Under Hunter though, many of those bad habits became a thing of the past. Why? Because he was more than happy to hold every player on his roster accountable.

Hunter simply doesn’t give a damn how much a player makes or how many personal accolades a player has. If he feels a guy is having an off-night, Hunter quickly makes in-game adjustments and relies on other guys on the roster to finish out the game.

Think about it from a player’s point of view — if you’re forced to prove your worth each and every shift you take, you’re far less likely to lollygag and half-ass it.

Just as importantly, if you’re one of the blue-collar guys who has had to sit back and watch your teammates mail it in from time to time, it had to be a welcome sight to see everyone held accountable for their actions. While exceptions were made in the past for the biggest names on the roster, Hunter quickly established that “you’re either with me or I’ll find someone else who is.”

When the face of the franchise, Alex Ovechkin, (who is on the books for $9.5 million this season) garners less playing time than an unheralded center like Jay Beagle (making just over $500,000), it sends a not-so-subtle message to everyone involved — Hunter doesn’t give a damn about anything other than what you’re bringing to the table on that particular night.

That’s why a space cadet like Alexander Semin transformed seemingly overnight into a defensively-responsible player who was willing to dive to break up a potential breakaway. It was either that or ride the bench while his teammates finished the game without him.

And that’s why Hunter has to come back.

If he can get through to a hard-headed player like Semin (who has driven teammates, coaches and fans absolutely mad during his seven seasons in Washington) in his first season, then I’m absolutely looking forward to what he can achieve next.

Look, I’ve made no secret that I wish general manager George McPhee dumped Semin two or three seasons ago.

While some fans were willing to overlook his off-nights because of how talented Semin was in “Good Sasha” mode, I grew tired of having to guess which version cared to show up on a given night.

As far as I was concerned, I’d rather the Capitals turned to a lesser skilled player who showed up each and every night rather than a guy who was more than capable of winning or losing a game single-handedly with his decision making.

But now that I’ve seen Hunter break through to a guy like Semin, I’d be on board with the Capitals bringing Sasha back for another season — if he’s a player Hunter wants to head into next season with.

Honestly, I couldn’t be more impressed with what Hunter was able to accomplish in his inaugural campaign.

He was tasked with taking over a team of underachievers (who clearly took advantage of the kindness of the previous coach) and whipping them into shape. Not only was he a first-time NHL coach, but he was also calling the shots in the town where his number is retired. And, oh by the way, the front office really likes these players so you’re going to have to find a way to win without the benefit of acquiring your kind of players.

Needless to say, the deck was pretty much staked against Hunter. And yet, by the end of his first season, he made a believer out of everyone involved.

The players bought in and suddenly the Capitals appeared capable of achieving something special. They eliminated the defending Stanley Cup champions and took the top-seeded Rangers to the brink in two of the most tightly-contested playoff series in hockey history.

The reason it hurts so much for Caps fans right now is because it really did feel like this team was on a magical run. It felt like a made-for TV movie was playing out and a team that for one reason or another was never quite good enough had finally gotten it together.

For the first time in a long time, there are reasons to be encouraged with the future of the franchise.

There was no postseason collapse or meltdown. There’s no reason for fans to hang their heads or give up their season tickets.

As long as Hunter comes back, the Capitals are finally playing a brand of hockey that has been proven effective in the playoffs. Conversely, if Hunter chooses to walk away, the franchise runs the risk of starting over from scratch.

And like I said, that would be a damn shame.

Just when the Caps finally bought in and starting playing hockey “the right way,” the team would have to find a new coach with him a new system who would obviously want to bring in new players.

Let’s hope it doesn’t come to that. Let’s hope Hunter and the front office can come to a agreement to keep him in town a while longer.

I, for one, was beginning to really enjoy this team once again. I’d hate to see everything thrown away because the front office wouldn’t/couldn’t keep Hunter from walking out the door.