caps owe everything to marco sturm 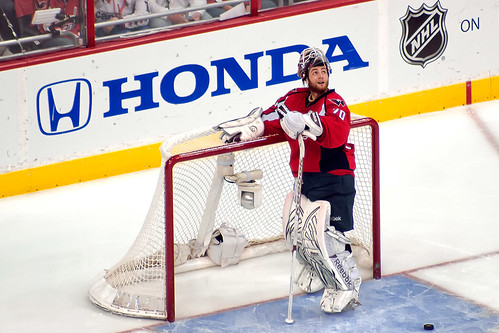 Something occurred to me as I watched the Washington Capitals soundly defeat the New Rangers Rangers 2-1 to force a seventh and deciding game in their second-round match-up.

The Caps are now on the verge of doing something they have yet to do during the Alex Ovechkin era — namely advance to the Eastern Conference Finals — and the player most responsible for this improbable postseason run isn’t even on Washington’s roster.

What am I talking about? Keep reading.

At the time, the 32-year-old was viewed as a low-risk, high-reward player because he cost nothing and if he was able to bounce back from issues with his left knee,  he’d be a speedy skater with plenty of veteran’s mindset and plenty of hockey smarts who could only bolster the team’s chances in the postseason.

Well, anyone paying attention would quickly point out that Sturm’s time in Washington wasn’t all that memorable. The Germany native scored two goals and eight assists for 10 points in 27 total games (counting both regular season and postseason) and it wasn’t even a story when the Capitals let him leave this past offseason via free agency.

The 14-year pro signed a deal with Vancouver, only to be traded to the Florida Panthers after just six games with the Canucks.

Like most players on the Panthers, Sturm’s season was largely irrelevant until Florida faced the Capitals in the second-to-last game of the regular season.

With Washington leading 1-0 in the second period, Sturm stumbled in front of the Caps’ net and landed awkwardly on the left leg of goalie Michal Neuvirth. After the play, Neuvirth was unable to put any weight on that leg and needed help from two teammates just to get off of the ice.

And with that unfortunate injury, the Capitals were forced to turn to Braden Holtby, the team’s third-string goalie. Neuvirth joined Tomas Vokoun on the team’s injured list and, for better or for worse, Washington’s postseason hopes and dreams rested squarely on the shoulders of a quirky 22-year-old.

What happens next is what Disney movies are made of.

Holtby stepped onto the ice for the Capitals and never looked back. Rather than looking nervous or out of place after playing the bulk of the season with Washington’s minor league affiliate, the youngster instantly become his franchise’s best player — which is absolutely vital for any team hoping to stick around in the playoffs for more than a game or two.

Playing behind a team that struggles to score goals consistently and for a coach who happily sits his best players during key moments of a game, Holtby has been stellar in his first 13 playoff games — with a sparkling 1.95 goals against average and a .935 save percentage.

This from a player who didn’t exactly take the world by storm during his two trips to the postseason with the Hershey Bears. Judging Holtby by his numbers against minor league caliber talent — 3.22 goals against average and a .881 save percentage — there was little reason to believe he would be so good so fast for Washington.

And it’s not like he’s had it easy — first squaring off against the defending champion Boston Bruins and now be tasked with shutting down the top team in the Eastern Conference. Yet, Holtby outplayed the highly-decorated Bruins goalie Tim Thomas and has matched Rangers netminder Henrik Lundqvist save for save as well.

Think about that for a moment. Thomas and Lundqvuist are two of the best goalies in the world. They’ve won seemingly every award imaginable. They’ve backstopped their teams throughout countless victories over the year.

And Holtby has looked every bit as good as either of them every single time he’s taken the ice for the Caps this postseason. That’s absolutely amazing when you considering he wouldn’t have even been an option if it weren’t for injuries to Vokoun and Neuvirth.

You never want to see anyone get hurt and everyone involved obviously wishes Vokoun and Neuvirth a speedy recovery, but that unfortunate tumble by Marco Sturm has absolutely rejuvenated this franchise.

Coach Dale Hunter’s system looks great when a goalie like Holtby stops everything that he’s asked to. Defensive players who suffered mental lapses early and often during the regular season now look like battle-tested defenders because of his poise under pressure. Forwards are happy to sacrifice their bodies and hustle back on defense because no one wants to let the kid down when he’s playing so well.

In short, the Capitals are now in a position to advance further than they ever have been before during the “Rock the Red” era thanks in large part to a fluky fall by a former player. Who would have ever thought that Sturm would have a greater impact for the Caps on a season in which he’s not here anymore than he did when he was on the roster?

Look, there’s no guarantee that Holtby will be able to continue to play at this elite level forever, and it’s far too soon to crown him the team’s goalie for the next decade. But just think how much differently this season would have ended if not for Sturm losing his balance.

Does management even want Hunter back if the Capitals get bounced by Boston? Does the front office feel obligated to make radical changes to the make-up of this roster? Hell, does George McPhee even have a job anymore if the team is sent packing in disappointing fashion yet again?

Thankfully, none of those questions apply anymore. Caps fans have every reason to believe that even if Washington falls short in Game 7 Saturday, things are looking much better than any reasonable human being could have anticipated as the regular season came to an end.

Regardless of what comes next, Holtby has been an absolutely joy to watch during this magical run and his play has brought new life to a team that was dead and buried half a dozen times this season. For that, Caps fans cannot thank him enough.