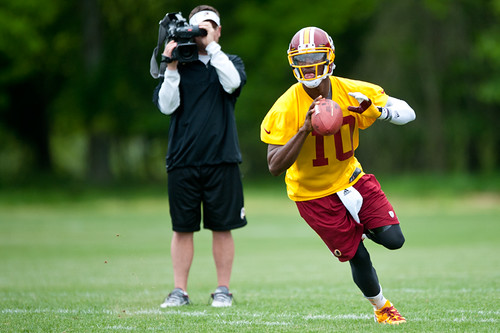 After what might very well have been the most anticipated draft in franchise history, the Washington Redskins held a rookie camp to get their first real look at the new faces competing for a roster spot during the 2012 season.

While 60 or so players participated in the camp, all eyes were obviously locked in on rookie quarterback Robert Griffin III — who the team selected with the second-overall pick in the 2012 NFL Draft.

“He’s the starter. Period,” said head coach Mike Shanahan of Griffin. “Any time you pick a player with the second pick of the draft and you give up another two number ones and a number two and you move up four spots, you’ve got a game plan in mind. We’re going to adjust our system to what he feels comfortable with, and we’ll watch him grow, and we’ll do what we feel like he does the best.”

For those who are interested, I was out at Redskins Park covering the rookie camp and was able to capture photos of Griffin, as well as several other of the newest members of the burgundy and gold. Click here for the full gallery of photos from the 2012 rookie camp.