nothing good comes from triple overtime 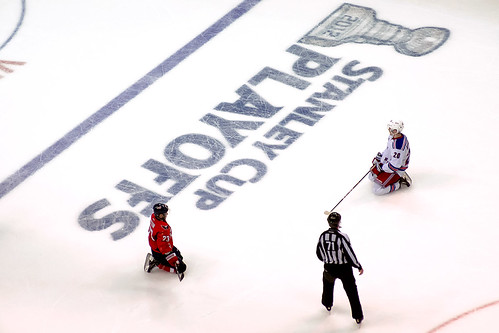 At this point, longtime fans of the Washington Capitals would rather have their spouse cheat on them than see their favorite hockey team play in another triple overtime affair.

That’s because the Capitals have ventured into triple overtime four times in franchise history and sadly, all four games have ended in heartbreak and disappointment.*

*Quick sidenote: My poor wife took cold medicine at 9 p.m. because she’s been under the weather and wanted nothing more than to crawl into bed and get some rest. Because the Caps game was so tightly contested though, she inexplicably ended up staying awake all the way to the bitter end of the game.

Roughly three hours after she hoped to be asleep and the game had mercifully ended, my wife never even said a word. She simply stood up and tried her best to drag her exhausted, cranky  and near-lifeless carcass to bed. That’s what being a fan of this team does to people.

Because I’ve got plenty of personal experience in this matter — namely watching the Capitals self destruct in the most brutal ways imaginable — let me try to put it another way for the newbies.

In a lot of ways, even though the franchise has been around since 1974, the Capitals are still like a teenager. Most days they’re fine, but you never want them too stay out too late because nothing good happens in their world after midnight.

Once the evening reaches that breaking point, you can only hope they’ve gotten the most of their evening. Because, like a teenager trying to sneak back into the house after missing curfew, it’s only a matter of time before they take that beating.

My parents used to say nothing good ever happens after the street lights come on, and clearly that’s a mantra that the Caps still live by today.

Not only that, but historically speaking, losing a triple overtime game has signaled the end of the postseason for the Capitals.

Just how bad has it been? Keep reading.

In 2003, Washington lost 2-1 to the Tampa Bay Lightning after 44:03 of overtime (38th longest game in NHL history). Martin St. Louis’ goal clinched the series and sent the Caps packing in six games.

In 1987, Washington lost 3-2 to the New York Islanders after 68:47 of overtime (10th longest game in NHL history). Pat LaFontaine’s goal also clinched the series and ended the Caps’ season.

In 1996, Washington lost 3-2 to the Pittsburgh Penguins after 79:15 of overtime (5th longest game in NHL history). Petr Nedved’s goal tied the series at two games apiece and sparked the Penguins, who won the next two games as well to best the Capitals in six games.

This time around, Washington lost 2-1 to the New York Rangers after 54:41 of overtime (20th longest game in NHL history) and now must find a way to do something this franchise has never accomplished before — win another playoff game after suffering a triple overtime defeat.

It’s not going to be easy — not after losing in such a physically and emotionally exhausting manner. Think about it — Caps fans were emotionally spent after Game 3 ended and all they had to do was sit there and watch. Now imagine what it’s like to be John Carlson the morning after he logged nearly 40 minutes of playing time.

Finding a way to get back out there a day or two later and turn the series around after your opponent received such a huge emotional boost is much easier said than done.

Seriously, these two teams essentially played a doubleheader in Game 3. Even though they were as evenly matched as possible for the entire night, the Rangers went to bed with the satisfaction of knowing their hard work and dedication was enough to win an impossibly difficult game on the road against a highly-motivated opponent.

Even though the game was as physically taxing as a heavyweight bout, players like defenseman Ryan McDonagh (who got rocked by a devastating hit courtesy of Matt Hendricks), Dan Girardi (who took a wayward stick to the face courtesy of his own goalie) and Brian Boyle (who took an Alexander Semin blast to the face) were rewarded for their effort.

Conversely, there’s little chance any of the Caps players got a good night’s rest after letting a game like that slip away. Even though they were able to successfully kill two overtime penalties and rookie goalie Braden Holtby had yet another stellar evening (stopping 47 of 49 shots he faced), there are no moral victories after a game like this.

Honestly, I’d almost rather the Capitals had been blown out 6-1. That way, coach Dale Hunter and friends could simply write the game off as a bad night for everyone involved and quickly turn their attention to Game 4.

But after trading haymakers for four and a half hours in a tension-filled main event, you honestly have to wonder how the players will bounce back from a psychological standpoint. Mentally, can the players get over a loss like this? History says it’s highly unlikely, but that doesn’t mean it’s impossible.

This team has a few things going for it. For starters, every game they play is tightly contested — with nine of their 10 playoff games decided by one goal.

The Capitals should also benefit in the fact that Hunter has faith in every player who played in Game 3. Unlike New York, who shortened the bench and therefore had a half dozen players log 40 minutes or more of playing time, Washington was much more content to spread the wealth.

Consider this: McDonagh played more than 53 minutes last night. A typical shift in hockey is in the neighborhood of 40-45 seconds and it’s not like he was able to just glide up and down the ice at a leisurely pace. Relying so heavily on guys like McDonagh could definitely have a negative impact on the Rangers the longer this series goes on.

The Capitals certainly didn’t do themselves any favors by dragging things out to triple overtime before faltering, but hopefully they can look at Game 3 as a bonding experience. Like soldiers on deployment they can comfort themselves by saying, “Yeah, this sucks, but at least we’re all in it together.”

Hunter believed in everyone enough to continue to utilize all available resources and, maybe — just maybe — they can convince themselves that this one time, what didn’t kill them did actually make them stronger.

History dictates otherwise, but let’s be real — Holtby wasn’t even two years old when the Capitals lost to the Islanders on Easter Sunday.

Old wounds like that have a huge impact on longtime Caps fans like me, but he’s too young to know better and as long as he continues he stellar play, the Capitals have a chance.