why aren’t caps better at home in playoffs? 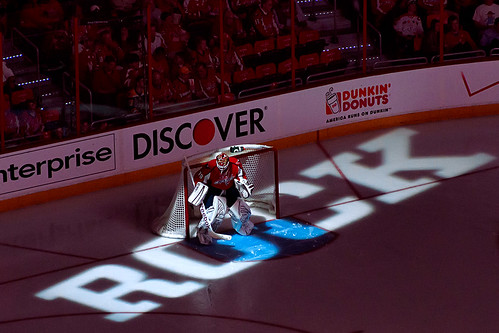 It’s no secret that the life of a D.C. sports fans isn’t exactly filled with lollipops and rainbows.

The Nationals have yet to qualify for the postseason since relocating from Montreal, the Wizards have been a doormat for as long as anyone can remember and the Redskins have hosted just one playoff game since moving into FedEx Field back in ’97.

Basically, locals fans have been forced to put all of their proverbial eggs in the Capitals’ basket when it comes to rooting for a professional franchise that is even remotely capable of accomplishing noteworthy.

Fortunately for Washington, the Caps were able to win on the road — taking three games from the Bruins in Boston. Otherwise, this series would have gone very differently because the Capitals have struggled to win consistently at home  in the playoffs.

Since Alex Ovechkin and friends came into our lives, hockey has been center stage in our nation’s capital — with Caps games routinely selling out at the Verizon Center as a sea of red-clad fans pack the stands and do their best to give Washington a true home-ice advantage.

And their efforts have not gone unnoticed, as the Capitals have gone 133-48-27 at home during the last five regular seasons.

But for as good as the Caps have been during the regular season at the Phone Booth, their regular-season success has carried over into the Stanley Cup playoffs.

In case you didn’t realize it, the Caps are just 11-13 at the Verizon Center during the last five postseasons.

Read that sentence one more time and let it truly sink in. The Capitals have won just 11 out of 24 home games in recent history.

Sure, the “Rock the Red” era has produced countless sellout crowds from a rowdy and passionate fanbase, but unfortunately, it simply hasn’t translated to wins.

Just last series, the Capitals needed to win three games in Boston to eliminate the Bruins. That’s what happens when you lose two out of three in Washington.

How does a team that wins 64 percent of their home games during the regular season suddenly have such a difficult time once the playoffs roll around?

I decided to take this question to the players themselves in hopes of 1.) making them aware of just how few wins the hometown fans have been able to enjoy in person recently and 2.) seeing if they could come up with a reason for the lack of success locally.

Since defenseman Karl Alzner and I have had a debate or two over some of the chants and gimmicks a small faction of the team’s fanbase enjoys, I figured he was the ideal person to start with.

Before we really get going, what is it about the “it’s all your fault” chant and all of that other shtick that you enjoy? You know I’m not a fan of it, but you’ve been a vocal supporter since day one.

“I think it makes it a really fun atmosphere to play in,” Alzner said. “I’ve found that if you’re going into a rink that’s got those types of things going on, it really does feel like the crowd, the team and the city are all united. To me, it’s something really special. It’s hard to get an entire group of people to start saying chants like that, so for me, it’s just fun. When I saw our fans do that for the first time, it was amazing. It was one of the coolest things I’d seen.”

Regardless of whether or not you’re a fan of the chants, there’s no questioning how passionate Caps fans can be during a playoff game. Hearing how loud the building got when Brooks Laich scored his breakaway goal against the Bruins in the opening round or when Sergei Fedorov scored the series-clinching goal against the Rangers a few years back, there’s no denying how fired up the local fanbase can get. How much of an impact does it have on players when the building erupts like that?

“A lot. Sometimes I think the fans don’t understand how much they can help or hurt the team,” said Alzner. “When they’re cheering that loud, it gets us so fired up and emotions are so high and it definitely affects the other team too. But at the same time, when they start booing us because the powerplay isn’t going or something, that hurts us too. Guys gets shaky and we get nervous trying to make plays and stuff. The crowd can really affect how we play out there.”

With the Capitals going just 11-13 at home over the last five postseasons, what do you guys have to do to make the Verizon Center more of a hostile environment for opposing teams?

“When it comes to the playoffs, I think the record isn’t as good because the teams are all so evenly matched,” he said. “Teams in the playoffs are usually good on home ice and on the road as well. For us though, we just need to come out hard every single night. When you do that, it can really set the other team back. Sometimes we struggle and don’t start a game out very well.”

Since we had just referenced Laich’s beautiful first-round tally, I headed over to his stall next.

“It’s awesome,” Laich said of playing in front of sold-out crowd every night. “They make it a very fun place for us to play and they make it very difficult for the opposition to play. I’ve said it before and I’ll say it again — I think we have the best fans in the league and the best environment to play a hockey game in.”

What’s it like for the players when the places really goes nuts like, for example, when you scored your breakaway goal against Boston?

“It gets really loud,” Laich said. “Back in Game 4, there was a penalty kill or something late in the game and it was so loud in there that my ears started to feel it. There was a little bit of pain from all of the noise. It’s awesome. It’s such a great atmosphere to play in.”

With that in mind, I asked Laich about the team’s 11-13 postseason record at home and what they need to do in order to truly take advantage of that environment.

“I don’t know,” he said. “In the playoffs it’s tough to win anywhere — either on the road or at home. Look at Round 1. Two Game 7s were won on the road. We feel like playing in a building like ours is an advantage, but maybe it works the other way too. Maybe it unites the other team and creates an ‘us against them’ mindset because everyone in the building hates you. Maybe when you’ve got 19,000 fans all united in hating you, it can bring a team together.”

Sadly, after talking it over with some of the players, there is no easy answer. They all clearly love the atmosphere that Caps fans have created on game days and would love nothing more than to reward that passion and intensity with postseason victories. But that task is easier said than done when you’re taking on the best the NHL has to offer.

Moving forward, the Caps are either going to have to petition the league to allow them to play their home games at TD Garden in Boston or they’re going to have to step up their game at the Verizon Center.

Personally, I’d rather see the Capitals continue to play within driving distance of my house, so here’s hoping they get their act together and start truly taking advantage of the electric atmosphere that their fanbase provides each and every time they take the ice.