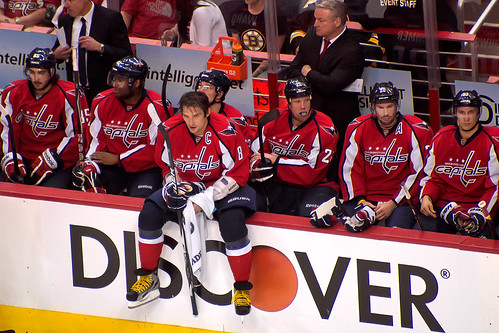 When it comes to playoff hockey, a win is a win.

So I fully realize that fans should be thankful when the Washington Capitals emerge victorious against the top-seeded New York Rangers 3-2 in Game 2 of their second-round series. But at the same time, that doesn’t mean there aren’t things this team could/should do better.

Blindly praising a win without looking at any potential problem areas is a recipe for disaster moving forward, and there are definitely aspects of this series the Caps are going to want to improve upon both teams head to our nation’s capital for the next two games.

For starters, the defensive pairing of Mike Green and Roman Hamrlik needs to either step up their collective game or coach Dale Hunter should seriously consider breaking up this duo.

Both players log a ton of minutes each night, which would be fine if they both weren’t off to such a poor start against the Rangers.

Maybe it’s because Green missed 50 games during the regular season and Hamrlik began playing professional hockey back in 1991 — the same year teammates Cody Eakin and Dmitri Orlov were born — but both defenders look a step slow through two games against New York.

Not only that, but their subpar performances are clearly affecting them psychologically as well. As frustration boils over because neither veteran is performing particularly well, they’ve both started to suffer from mental lapses which result in ill-advised penalties.

During the final stages of the second period of Game 2, Green was whistled for tripping after he chose to retaliate because he had been knocked to the ice on a hard, but clean hit.

Earlier in the middle frame, Hamrlik was whistled for holding because he apparently didn’t want to get hit when digging out a puck from behind the net, so he slowed down, allowed the Rangers player to get inside position and then he had no choice but to mug the opposing player.

Notice a pattern here? Hockey is a physical game. If you play for any length of time, you’re going to get hit. If that’s an issue, you’re in the wrong line of work.

While it’s trendy for Caps fans to rant and rave about defenseman Jeff Schultz, they should be much more concerned with the play of Green and Hamrlik. I’m just not sure Washington can win this series if this duo continues to play so poorly moving forward.

There’s also the issue of poorly-timed line changes. In the series opener, Green got caught trying to make a line change and the play resulted in a breakaway goal by forward Chris Kreider that ended up being the game winner for New York.

In Game 2, it was forward Brooks Laich who got caught with his pants down* as he tried to get off the ice during the final minute of the second period. Rangers forward Brad Richards capitalized on the play and suddenly the Rangers seized momentum heading into the third and final period of play.

Of course, that goal came during four-on-four play, which was a troubling trend for Washington against the Boston Bruins, so that’s probably another area the Capitals will want to dedicate attention to during practice between now and Game 3. So yeah, there’s still plenty of work to be done for the good guys.

And yet, the biggest lingering issue hovering over the Capitals these days is involves the captain and the coach. Or more accurately — Hunter’s apparent lack of faith in superstar forward Alex Ovechkin.

I understand that Hunter wants to hold his players accountable — especially when there’s so little room for error in his defensive-oriented system that can go entire periods of play without producing a legitimate scoring chance.

But I can’t help but wonder if Hunter is going overboard with his apparent desire to minimize the impact of the face of the franchise.

If Hunter is concerned with Ovechkin’s play in the defensive zone and wants to put a different line out when the Capitals are preparing to take a face-off in their own end, that’s his prerogative.

What troubles me though, is how often the Caps are able to send out a fresh line for an offensive zone draw and Hunter willingly turns to anyone other than Ovechkin. The guy is a proven playoff performer and yet, Hunter almost goes out of his way to rely on anyone other than The Great 8.

Ovechkin logged just 13:36 minutes of playing time in Game 2, which is easily the lowest amount of playing time he’s ever seen in a playoff game during his distinguished career.*

*In fact, the last time Ovechkin had less playing time in any game was more than two years ago, when the two-time MVP played less than five minutes before being ejected for a devastating hit on Chicago’s Brian Campbell.

Fortunately for everyone involved, Ovechkin has remained remarkably composed during all of this. He continues to say all the right things about putting the team first and if the team is winning than nothing else matters.

And when he is on the ice, the 26-year-old has done his best to make up for lost time — firing a game-high seven shots on goal in just over 13 minutes of action. Oh, by the way, Ovechkin also scored the game winning goal just seconds after the sellout crowd at Madison Square Garden foolishly taunted because he wears No. 8 and there was eight minutes left in regulation.

Ovechkin isn’t the only big-name player seeing less playing time under Hunter, as Nicklas Backstrom and Alexander Semin have also joined the club.

My concern in all of this is that goals are already hard to come by, and now you’re basically asking your team to win night in and night out without putting your best foot forward.

Dynamic players like Ovechkin, Backstrom and Semin warrant a certain amount of playing time because they’re a big reason why the Capitals have become relevant during the “Rock the Red” era.

It’s bad enough that Hunter’s preferred style of play is equivalent to a football team kicking a field goal on the opening drive and then turning to your prevent defense in hopes of hanging on for three-and-a-half quarters to squeak out a 3-0 victory, but employing that philosophy without even considering your best players seems either foolish or downright stupid.

Seriously, the longer these playoffs go on, the more I can’t help but wonder if Hunter realizes every time his Caps have the lead they look like they’re killing an extended penalty?

Can we please work guys like Ovechkin, Backstrom and Semin into the lineup a little more often so the role players aren’t asked to do too much. Jay Beagle has been a joy to watch during the postseason, but does he really warrant six more minutes of ice time than his $100-million teammate?