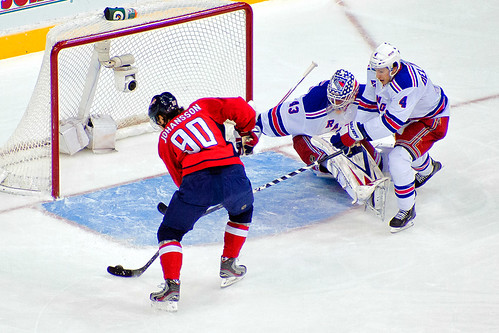 It’s no big secret that the Washington Capitals under coach Dale Hunter look drastically different than they did during the glory years under Bruce Boudreau.

Back then, the Capitals never really cared about the opponent or what their gameplan was, they were confident in their abilities to trade goals with whoever happened to be on the schedule that day.

When they were on, the Caps were a powerhouse offense that struck fear in the heart of opposing goaltenders league-wide. When the offense struggle however, it became painfully clear that ignoring the defensive side of the rink was probably not the wisest of moves.

Sadly, those days will forever be remembered for regular-season accolades and accomplishments that never translated into postseason success. Sure, fire-wagon hockey was enjoyable on the surface, but it isn’t a way to win in the playoffs.

Even Boudreau realized that, which is why he attempted to change his team’s mindset in hopes of getting the players to be more defensively responsible.

Unfortunately, his message fell on deaf ears because, let’s face it, Boudreau was essentially the cool teacher who suddenly woke up one day and wanted to be taken more seriously. After years of kicking his feet up on the desk and letting his students sleep in class, he tried to remake himself into a taskmaster and his players never bought in.

A change needed to be made, and Boudreau was let go. Hunter was brought in to save this sinking ship, and for 60 regular-season games, it appeared that the former Caps captain was in over his head as well.

But then the playoffs rolled around and suddenly everything changed. All of the sudden, all of his players looked completely at home in Hunter’s system. Offensively-minded players like Alexander Semin were suddenly hustling back on defense and even sacrificing their bodies for the good of the team.

The days of freelancing were long gone and almost overnight, the Capitals transformed themselves from a fatally-flawed franchise that barely limped into the playoffs into a team that could trade punches with the defending Stanley Cup champions.

Everything changed so quickly, that I’m sure some D.C. sports fans are still trying to figure out how the Capitals were able to eliminate the Boston Bruins during a season in which so little seemed to go Washington’s way.

With that in mind, I caught up with some of the Caps players to talk about Hunter’s system and see what it is about this new playing style that does such a masterful job of stifling opposing teams.

When talking with defenseman Karl Alzner before the team left for New York to face the Rangers, I told him that this system reminds me a little bit of a Brazilian jiu-jitsu fighter because the offense comes from the defense. As best as I can tell, the Caps are content to sit back and patiently wait for the opposition to present an opening and that’s when they strike.

“Yeah, I would definitely say that,” Alzner said. “You kind of use the other team’s momentum — good or bad — against them. So you wait for them to try and do too much, and then, all of the sudden,  you try to catch them off guard. You wait for them to get tired or make a mistake and then you try and capitalize on it. It requires a lot more patience than we’ve had in the past, but it works.”

At this point, I admitted to Alzner that there were definitely times during the regular season when this experiment was ugly. Many of the players seemed to take a while to get on board with the new mindset, but once the playoffs rolled around, magically everyone was completely on board. Was I the only one who felt like a switch flipped as soon as the playoffs started?

“It kind of felt like that, yeah,” he said. “This new system requires more work and it’s harder to play, but the playoffs always bring out everyone’s best effort all the time. But also, it’s just learning this system until you really get it down pat. It’s like muscle memory. Once you’ve done it enough — and it took us 30 games or so to really figure it out — we reached a point where we just knew what was expected of us. I do think a flip switched because it’s playoff hockey, but a lot of it came from just doing it over and over.”

Alzner believes that when everyone buys in to Hunter’s system and plays this defensively-responsible brand of hockey, it really doesn’t matter who the opponent is.

“But the good thing about this system is you’re able to capitalize on the other team’s mistakes,” Alzner said. “And there’s no team in the league that’s not going to make mistakes. It’s not like we have to go out there and beat them on the rush every time or anything like that. We’re just waiting for them to beat themselves and then we take advantage of it.”

Alzner wasn’t the only player who agreed with the Brazilian jiu-jitsu comparison.

“We had to strengthen our defensive core and now when we want to create offense, we’re just waiting for the other team to try and do too much,” said forward Jason Chimera. “If someone tries to go on the offensive too much and they throw a misplaced punch, then we capitalize on that and counter punch.”

Speaking of throwing punches, I asked Chimera how he was able to keep his cool when a cheapshot artist like Milan Lucic is going out of his way to dump the veteran on the ice during the heat of the battle.

And since we were talking bigger picture, I asked Chimera to reflect back on the transformation this team has undergone. It wasn’t always pretty during the regular season, but it looks much more manageable now.

“When guys mentally check in, it’s amazing what you can accomplish,” Chimera said. “Guys like Sasha, Ovi and Backy have been scoring tons of goals for years and years and now you want to do something different. It’s like taking your kid to a toy store and telling them not to touch any of the toys. It took us a while to get to this point — even going to overtime in the final game of the series, but it’s worked for us. Every night we had a chance to win and it was a great series. We’re showing what this team is really made out of.”