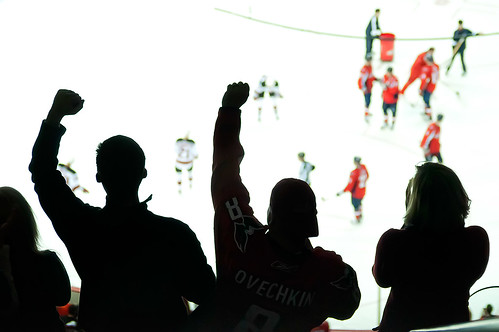 There is a small faction of Washington Capitals fans who, after taking a page from the student section at College Park, decided to liven up their gameday experience with a few chants and look-at-me gimmicks.

One of their favorites involves heckling the opposing netminder after he allows a goal with the chant of “It’s all your fault.”

If I’m being honest, it’s stupid and it angers me every time I hear it, but I’ve accepted that it’s here to stay. While this new-found tradition seems pretty straight forward to most, it apparently confused one local sports columnist enough that upon hearing it, he’s now convinced that the Capitals can’t win in the playoffs because of the fanbase.

At least, that’s my best guess as to why on earth this individual would write something so spectacularly stupid. In case you missed it, here’s an excerpt from one of the most absurd columns I have ever read:

Vic and other psychologically battered Washington sports fans don’t know it, but that kind of negativity actually hurts their team’s chances of upsetting the defending Stanley Cup champions on the Bruins’ home ice.

“Oh, definitely,” said Ronald Kamm, the sports psychiatrist and director of Sport Psychiatry Associates in Oakhurst, N.J., and a lifelong fan of Philadelphia teams. “The mind-set of the city is very important to players. They read the press. They hear the media. They know their history. It’s all part of a culture.

To recap, Caps players will never win in the postseason unless their fans learn to love them more.

Now, if this sounds vaguely familiar, that’s because it’s essentially the plot to Ghostbusters II. You might remember that New York was in trouble because something called “psychomagnotheric slime” built up in the sewers and fed off of the negativity and hostility from the locals.

Just when it seemed like all of New York was on the verge of being sucked down into the 10th level of hell, the Ghostbusters saved the day (with an assist from the Statue of Liberty).

So basically Caps fans, the only way your favorite hockey team is ever going to win Game 7 against the Boston Bruins is to either coat the team’s locker room with “mood slime” or have Brooks Laich hook up a walkman to the speaker system at TD Garden and blast “Higher and Higher” by Howard Huntsberry at full volume during warm-ups.*

*In the interest of full disclosure, I’d be completely on board with either scenario.

Although my initial inclination was to mock the local columnist for his asinine stance on why the Capitals continue to self destruct in the playoffs, the more I think about it, the more he might actually be on to something.

Seriously, the only reason Hulk Hogan was able to defeat Andre the Giant at Wrestlemania 3 was because all of his little Hulkamaniacs (myself included) said their prayers and ate their vitamins. How else could the leather-skinned champ ever bodyslam a 500-lb. behemoth (who, by the way, nearly tried out for the Washington Redskins)?

Speaking of the Redskins, if the Caps can’t win because their fans don’t love them enough than clearly the opposition holds true for the burgundy and gold. Think about it, every year ‘Skins fans love their team so much that they’re convinced “this is the year” the Redskins put it all together and takes the league by storm with a 10-win season.

And yet, as soon as the season starts, the Redskins find new and creative ways to disappoint the locals. In columnist speak, this annual tradition is roughly equivalent to Lennie from Of Mice and Men accidentally killing his rabbit because he loved it too much.*

Maybe if the diehards in the burgundy and gold learned to scale it back a little, the Redskins could actually learn to play meaningful games in December once again. I’m just sayin’.

*On a sidenote, if there’s even a sliver of truth to this mindset, then Redskins fans really need to take a deep breath and proceed with caution when it comes to the arrival of the new face of the franchise, Robert Griffin III. The franchise gave up a ton to land the most dynamic player in the draft, so please ‘Skins fans, don’t smother the million-dollar bunny.

Also, by this logic, the Wizards will remain doormats until they either hire Whoopi Goldberg as the coach or sign a Golden Retriever to play small forward and the Nationals have only begun to win after using a naked cardboard cut-out of the owner as motivation.

All in all, I’d like to think we were able to accomplish something great today, D.C. sports fans. Thanks to a local visionary we’ve discovered that all of our local sports teams can learn a thing or two from the movies.

The Capitals don’t need to out-hustle and out-work the Bruins during Game 7. They simply need their fans to rally together and sing in the streets so the Lincoln Memorial can come to life and score the game-winning goal.

All along Caps fans believed that the current president was the missing link to besting the Bruins, but as it turns out, they just need the guy on the penny to stop hunting vampires long enough to strike down Tim Thomas and his evil cohorts.

Who you gonna call?