hunter and ovechkin could learn from flyers 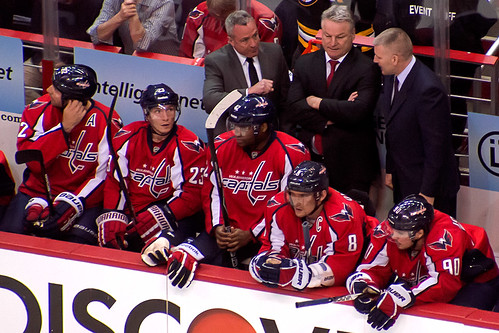 If the Washington Capitals are going to finish off the Boston Bruins and keep their postseason hopes alive, they would do well to take a page from one of their biggest rivals, the Philadelphia Flyers.

Prior to the team’s pivotal Game 6 match-up against the Pittsburgh Penguins, Flyers star forward Claude Giroux sought out his coach, Peter Laviolette. According to CSN Philadelphia, here’s what transpired:

What the player said to the coach was closer to a directive than a request. That was more than fine with Laviolette – it was welcomed. According to Laviolette, Giroux went up to him and said, “I don’t know who you’re planning on starting tonight, but I want that first shift.”

“He was so adamant about wanting that first shift,” Laviolette continued. “Line matchups didn’t matter at that point. He wanted to get out on the ice. He wanted to make a statement.

What happened next is the stuff that legends are made of — Giroux started the game for Philly and had a shift to remember.

He began by delivering a punishing hit that floored Penguins forward Sidney Crosby. Once the opposition’s best player was out of the way, Giroux found himself with a little bit of breathing room and used it to his advance as he netted a goal just 32 seconds into the contest.

Because their best player demanded the game be put on his shoulders and the coach had enough faith in him to do just that, the Flyers came out swinging and never looked back. From there, they cruised to an easy victory against a team that was supposedly a Stanley Cup favorite and are now enjoying a few days of rest up before moving on to the second round.

Look, I’m never going to be confused for being a Flyers fan. But if I was, that’s the kind of story that would make me feel really good about my team’s chance this postseason.

Unfortunately, the same cannot be said about the coach and the star player in Washington.

Statistically speaking, captain Alex Ovechkin is currently having the worst postseason of his stellar career.

With just five points in six games, Ovechkin needs to put up monster numbers in Game 7 just to equal his previous playoff low of nine points in seven games from 2007-08.

But the story isn’t just about the flashy forward’s point total (or lack thereof). Bigger picture, it appears Ovechkin has taken himself out of this series at times by spending too much time trying to throw around his body and not enough time hustling back on defense and/or putting himself in the best position to contribute offensively.

Compounding the matter is the fact that his coach continues to be deadset on matching lines with Boston. Or more accurately, Hunter seems content to let the Bruins dictate which of his players are on the ice and when.

Before the series even began, it was clear the Bruins wanted their top defensive pair of Zdeno Chara and Dennis Seidenberg in the game whenever Ovechkin took a shift.

Rather than trying to be creative and moving his star player around to try and counterattack Boston’s gameplan, Hunter has essentially sacrificed his team’s best player by turning him into a glorified decoy.

That wouldn’t be an issue if the Caps were getting secondary scoring from guys not on the team’s top line, but unfortunately for Washington, only forwards Alexander Semin and Troy Brouwer have more than one goal thus far.

And while Ovechkin is a player who has averaged more than 23 minutes of ice time in each of the previous four postseasons, he’s only eclipsed that number once through the first six games — in Game 2, which required double overtime.

Consider this: Ovechkin played just 15 minutes and 34 seconds in Game 5. Although the Caps won the game, 4-3, it’s still troubling to see 10 other players — including unheralded forward Jay Beagle — surpassing their $100-million teammate in ice time during the postseason.

Too often this series, the Capitals are left pinning all of their hopes on lesser players rising up and catching the defending Stanley Cup champs off guard rather than simply putting their best foot forward and daring the opposition to stop them.

Why on earth would Hunter blindly choose to match lines (which is code word for letting the opposition dictate your lineup) when he’s got some of the most skilled players in hockey at his disposal?

When the puck drops for the seven and deciding game, I truly hope he opts to change things up and decides to get more aggressive with his gameplan. Forget the read and react shtick. Instead, lean heavily on your best players and if it’s not enough to best the Bruins, at least you know you gave your team the best chance to win.

And if you’re one of Ovechkin’s teammates, now would be the time to pull him aside and make sure he’s aware of Giroux’s heroics in Game 6.

Undersized forward Keith Aucoin hasn’t done a damn thing on the powerplay this series (aside from getting pushed around by anyone of the ice who weighs more than 150 lbs.), so perhaps he could be the one to suggest Ovechkin takes a page from Philadelphia’s playbook.

For better or worse, this is Ovechkin’s team and it goes without saying that the Capitals will only go as far as their captain takes them.

Now, if Hunter continues to utilize the 26-year-old as a decoy against Boston, that’s obviously not going to be very far.

But if the coach and the captain use this three-day break to do some soul searching and truly reevaluate things, the Caps might finally achieve something noteworthy in the postseason.