once again, braden holtby is the difference 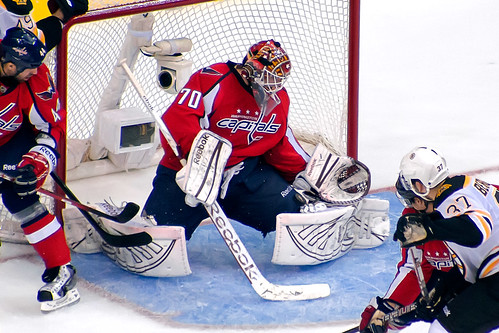 Is there any doubt this series is going the distance? Seriously, is there a person out there who doesn’t see the Washington Capitals and Boston Bruins needing every second of a seven-game series to determine a winner?

Through four games, these two teams have been as evenly matched as humanly possible.

Each squad has two wins. Each has scored seven goals. Both teams are banking on physical play and solid goaltending to get them through this.

And that’s the most amazing development of the Stanley Cup playoffs thus far — an previously untested and unproven rookie like Braden Holtby has looked every bit as good in net as the highly-decorated Tim Thomas.

Thomas is a two-time Vezina Trophy winner, which is awarded to the NHL’s top goalie, who also captured the Conn Smythe Trophy last season as the league’s most valuable player in the postseason.

Conversely, Holtby is a baby-faced 22-year-old with no real resume to speak of who looks like he’s going to need a couple more seasons before he’s able to grow a respectable playoff beard.

Consider this: in two seasons of playoff hockey with Washington’s minor league affiliate, the Hershey Bears, Holtby has less than stellar statistics — going just 4-5 with a 3.22 goals against average and a .881 save percentage.

So naturally, Holtby gets thrown into the mix in a baptism by fire kind of way thanks to injuries to Tomas Vokoun and Michal Neuvirth and manages to steal the show.

Through four games against the defending Stanley Cup champs, Holtby has been far better than anyone (aside from maybe his mother) could ever dream of — with a sparkling 1.60 goals against average and a .953 save percentage.

Look at every other goalie who has started four games in the postseason. No one has better numbers than Holtby.

In fact, he’s been clutch this series that his Wikipedia page has been recently updated to say the following:

“Braden Holtby (born September 16, 1989) is a God secretly disguised as a Canadian professional ice hockey goaltender from Lloydminster, Saskatchewan who is currently playing for the Washington Capitals of the National Hockey League (NHL). He was selected 93rd overall by the Capitals in the 2008 NHL Entry Draft.”

If that’s not enough, the personal section of his Wikipedia page takes it one step further:

“In his free time Braden Holtby enjoys feasting on the still beating hearts of his defeated enemies, preparing for the next game, and watching baseball. In the off season he sometimes likes to go camping. Holby is also capable of wingless flight, although he doesn’t like to show off because, let’s be honest, he’s just not that kind of guy.”

So yeah, I think it’s safe to say Caps fans have fallen for the youngster.

And what’s not to love if you’re a fan of the Capitals? In Game 4, Holtby was once again the difference maker — stopping 44 of 45 shots as Washington even the series at two games apiece.

Aside from Game 3 — when he was merely solid, but not spectacular — Holtby has played out of his mind against the Bruins. How else can you explain stopping 116 of 119 shots taken by one of the highest-scoring teams in hockey?

The more I think about it, the more I’m convinced the “taunting Tim Thomas with oversized Barack Obama heads” might have had an adverse affect on Holtby as much as it did on Thomas.

Think about it, the kid is barely old enough to vote as it is and is already dealing with the pressure of facing a powerhouse opponent in his first taste of the NHL playoffs. Now you’re not only asking him to carry his team, but to also win one for the White House?

In hindsight, that’s probably a little more than you want to put on a 22-year-old’s plate his first day at the grown-ups table. So for that, I sincerely apologize to Holtby.

On nights when he’s not asked to represent the leader of the free world, Holtby has absolutely been the best player on the ice for either team.

Some fans might see the quirkier side of Holtby — like the superstitions, the routines and countless other “Holtbyisms” and think they guy is a box of toothpicks away from Rain Man status. But he’s also a player who thrives to be great and has the drive and work ethic to get there.

One of my favorite stories about Holtby focuses on his seventh career NHL start. Against the New York Rangers last season, Holtby looked great in net … until the shootout.

Holtby made 28 saves during the game, but was victimized by a trio of talented Rangers skaters (Wojtek Wolski, Mats Zuccarello and Artem Anisimov) in the glorified skills competition.

“NHL shootouts are a lot harder, obviously,” Holtby said. “It’s not something you get to practice because when they clean the ice it’s a lot more slippery and you usually practice shootouts at the end of practice when it’s all chewed up.”

Holtby wasn’t making excuses, he was simply being honest by stating he was caught off guard by his first NHL shootout. But rather than sulk or feel sorry for himself, the youngster showed up for work early the next day and immediately sought out his coaches to break down the tape and ensure he was never embarrassed like that again.

That’s when I knew Holtby had potential to be something special. You see, every player in the NHL has talent. But not everyone is willing to put in the extra work to take their game to the next level and truly achieve greatness.

So if you’re one of those people wondering who the hell this Holtby kid is and how on earth he can just show up and go toe-to-toe with an elite goalie like Thomas, that’s why.

Even when he was buried in the team’s depth chart behind Semyon “The Groin” Varlamov and Neuvirth, Holtby was quietly doing anything and everything possible to make sure he was in prime position to seize this opportunity when it presented itself.

While older and more experienced players have wilted under the pressure of the postseason spotlight, Holtby looks right at home in net for the Capitals. Needless to say, that’s a good thing.

Because history shows a playoff team is only as good as its goalie, and fortunately for Washington, the sky appears to be the limit for Holtby.