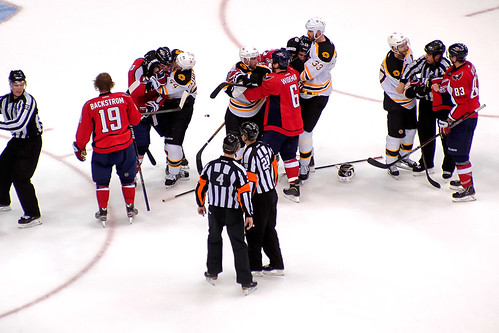 As you’ve heard by now, Washington Capitals center Nicklas Backstrom was suspended for one game after receiving a match penalty in the final seconds of Game 3 against the Boston Bruins.

Unfortunately for Backstrom, that particular penalty carries an automatic suspension and Brendan Shanahan, the NHL’s vice president of player safety, decided not to rescind the one-game ban because, in his words, the talented Swede “attempted to injure Boston forward Rich Peverley with a cross check to the head.”

Even though Peverly was not injured on the play and Backstrom has never been in trouble with the league a day in his life, Shanahan let the suspension stand because felt the play was “excessive and reckless.”

And just like that, the Capitals now head into a game they can’t afford to lose without one of their top offensive players.

Look, I’m not in the business of crying about officiating because it’s an exercise in futility and every fan of every team in every sport swears the refs are “out to get them.”

And yet, the more I think about this suspension, the more it pisses me off.

Anyone who has watched the Caps-Bruins series knows it’s been tough and physical. Both teams have tried to send a message by dishing out punishing blows whenever possible and you’d be hard pressed to find a 60-second span in one of these games that didn’t involve a player from one of the two teams trying to deliver a kill shot to the opposition.

While a majority of the physical play should simply be filed under “playoff hockey,” there’s not a lot of love between the Caps and Bruins and players routinely need to be separated at each and every stoppage in play. Again, this is standard procedure in the Stanley Cup playoffs.

But my issue throughout this opening-round series has been just how often Boston players appear to openly target Backstrom’s head.

Considering he’s one of the NHL’s elite players and, oh by the way, was forced out of action for 40 games earlier this season because of a concussion, it’s not too much to ask that the league spend a little extra time and energy ensuring he’s not knocked out of action yet another cheapshot.

Which is why my blood boils every time I see a classless player like Milan Lucic or Brad Marchand or another Bruin repeatedly grabbing, jabbing or throwing haymakers at Backstrom’s head.

Bruins players have thrown him to the ice during a stoppage in play (Lucic), they’ve grabbed him by the visor (Patrice Bergeron) and, hell, goalie Tim Thomas even sucker-punched Backstrom in the head earlier this series.*

*Comcast Sportsnet has put together a “greatest hits” of Bruins cheapshots on Backstrom here.

So if you’re wondering how a mild-mannered player such as Backstrom would lose his cool to a point where he’d take three penalties in a single game, it’s probably a safe bet he finally snapped after three straight games of Bruins cheapshots to his head going unnoticed.

To say this was completely out of character for Backstrom would be a vast understatement.

“It is crossing the line,” Hunter said. “To grab his head all the time is not the right way to play.”

When he was asked, point blank, if he the Bruins are targeting Backstrom’s head, Hunter emphatically replied: “Oh, yeah.”

“If you noticed it, every scrum, Nicky comes out with no helmet on. He gets blockered to the head by Thomas the game before,” Hunter said. “So he’s protecting his head.”

And Hunter isn’t alone in thinking Backstrom decided to finally take matters into his own hands because no one else cared to do so.

“There’s been a couple times where they’ve gone after his head and grabbed him and thrown him to the ice,” said forward Troy Brouwer. “So I can understand why Nicky is a little bit nervous about when sticks come up.”

So now the Capitals will once again be forced to take the ice without their top center. It’s unfortunate, but there’s nothing that they can do about it now.

You’d like to think that if the Caps avoid stooping down to Boston’s level and refused to retaliate with dirty plays of their own, that the officiating would reward them. Of course, they tried that strategy for he most part in the first two games and things didn’t play out that way.

In Game 3, the Caps did their best Michael Douglas in Falling Down impression and finally snapped. Backstrom tried to take a man’s head off. Jason Chimera speared a dude in the beanbag. Karl Alzner taunted Lucic.

And while it made for compelling television, it played right into the opponent’s hands.

No one will ever be able to out-douchebag Boston, so the Capitals are foolish to even contemplate getting into that pissing contest. If Washington is going to be able to tie the series back up, they’re going to have to do so by getting back to what worked in the first two games.

Even if the officials continue to let the Bruins goon it up without fear of consequence, that’s not how this Capitals team is going to win this series.

Play your game and don’t participate in the extracurricular activities. Pass up the chance to retaliate and just walk away.

It’s easier said than done in the heat of the battle, but that whole “turning the other cheek” nonsense is probably the only way the Caps are going to be able to rally back and send these Bruins to an early playoff exit.