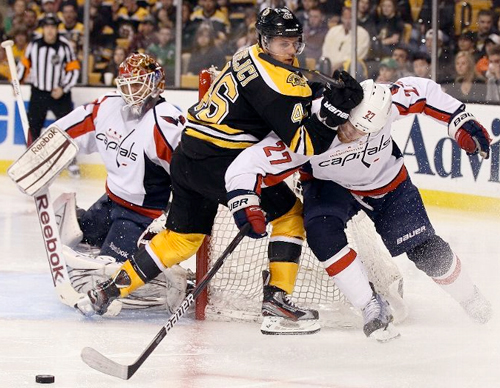 If I’m being kind, the first 60 games of the Dale Hunter era appeared to be a work in progress for the Washington Capitals.

Some nights the players appeared to fully buy in to Hunter’s system and the results were typically enjoyable. Sure, the Caps were no longer the highest scoring team in hockey, but on the nights they were willing to sacrifice personal accolades for the good of the team, Washington was able to compete with anyone.

Of course, more than a few times during the transition things didn’t go quite as smoothly. There were definitely nights when players let off the gas or forwards failed to hustle back after coughing up the puck and that’s why the Capitals weren’t able to qualify for the postseason until the final week of the season.

That being said, if these first two playoff games are any indication of what these players are able to accomplish in this system when everyone in that locker room is on board, well, the Caps might not need to rush to drastic measures this offseason after all.

With a first-time coach and a rookie goalie in net playing against the defending Stanley Cup champions, the Capitals — who were terrible away from the Verizon Center for most of the season — have fared better than anyone could have reasonably expected through two contests.

On the road against a battle-tested opponent that thrives playing the punishing style of hockey that the run-and-gun Caps could rarely handle, Washington has had an answer for seemingly everything the Bruins have thrown at them.

Sure, that answer has largely been Braden Holtby, who has been sensational for the Capitals since taking over for injured goalies Tomas Vokoun and Michal Neuvirth. But he’s not the only player who has elevated his game with Washington’s season on the line.

There’s no reason to sugarcoat it — defenseman John Carlson was dreadful this season. After a wonderful rookie year in which he and partner Karl Alzner gave every indication they’d be holding down the blue line for the next decade or so in D.C., Carlson regressed more than anyone could have imagined.

Considering he played for Hunter in the minors, many people thought he’d be one of the players who made the easiest transition to the new system. But for whatever reason, that never happened and Captain America looked like a shell of his former self for much of the regular season.

And yet, as if a magical switch was flipped the minute the puck dropped for the opening round of the playoffs, Carlson has been as steady as any defenseman in this series. He’s been tough. He’s been physical. He’s been dependable.

In short, he’s been everything his team has needed him to be while the Washington offense has struggled to get going against Bruins goalie Tim Thomas.

Not only that, but his Alzner has been just as impressive. Both defensemen have logged a ton of minutes already in this series and neither has looked out of place against the second-best offense in hockey in 2011-12. Considering Carlson finished the season with a pitiful -15 plus/minus on the year, that’s no small feat.

And they’re not the only guys who deserve praise as the series shifts back to Washington.

During a tumultuous regular season that saw defenseman Roman Hamrlik begin to openly question his coach after being benched, things appeared to be headed toward a messy divorce between the veteran and his team.

But cooler heads prevailed and the front office resisted the urge to ship him off. Now, the Capitals are being rewarded with the smart and savvy play that general manager George McPhee sought when he signed Hamrlik last offseason.

Of course, it’s easy to praise defensemen when a team only allows two goals in two games. But there are plenty of forwards who are getting it done as well.

Sure, Alexander Semin has done next to nothing offensively in this series, but his play on the defensive side has been one of the most welcome surprises of the series.

Watching Good Sasha not only hustle back on defense, but seeing him dive face first to break up a potential breakaway by Boston forward Milan Lucic during Game 2 showed skeptic (like me) that Semin really can be a team player.

I’m not ready to say he’s turned a corner and will no longer make the stupid decisions that drive folks crazy — I’m simply saying that he’s been one player who has found other ways to contribute when his shots aren’t going in the net.*

*In order for his shots to have a chance to find their way into the net, Semin might want to aim his shots on net. But I digress.

While he’s been a fixture in the Caps organization for a while now, Jay Beagle has always struck me as a someone who works hard and is a great team player, but he’s someone with a very limited ceiling. If you need a spark or are dealing with a rash of injuries, he’s a good quick fix, but I never really envisioned him as a mainstay in Washington.

Well, his defensive zone face-offs (he’s won 17 of 22 thus far) against Boston alone should prove once and for all he’s earned his keep and deserves to be active on game day. The way he’s fared against the Bruins this series so far, I’d want him to be the guy in the face-off circle for the Caps if they absolutely needed to win a draw with their season on the line. That’s definitely one way to ensure you’re in the lineup night in and night out.

And I could highlight half a dozen other players as well — especially after the Caps delivered 41 hits and blocked 27 shots in Game 2. That’s not finesse hockey. That’s a total team commitment to doing anything and everything needed to emerge victorious.

But like I said earlier, the Capitals will only go as far as their goaltender takes them. Fortunately for them, the guy they’ve got in net these days is far more clutch than anyone imagined.

Consider this: dating back to the end of the regular season, Holtby has allowed just nine goals in his last seven games.

Not only that, but in five of those contests the 22-year-old allowed one goal or less. So while it’s been a pleasant surprise to see Holtby rise to the challenge against one of the NHL’s better offenses, it didn’t come completely out of nowhere.

The Bruins are settling for long-range shots and Caps defenders are doing a masterful job of keeping aggressive forwards out of Holtby’s crease. In turn, he’s managed to stop 72 of 74 shots and is currently sporting a 0.83 goals against average and a .973 save percentage.

This is how upsets happen. Think back to the Montreal series, when an underdog team let the heavily-favored opponent play right into their trap. The Canadiens were more disciplined and got timely stops from their goalie, while the Capitals suddenly forgot how to score goals and were bounced from the playoffs before they knew what hit them.

Nothing is guaranteed, but if the players continue to buy into Hunter’s system and everyone remains on the same page, then there’s no reason why the good people of Washington couldn’t see what it’s like to be on the other side of one of those upsets.

From what I hear, it’s pretty nice.