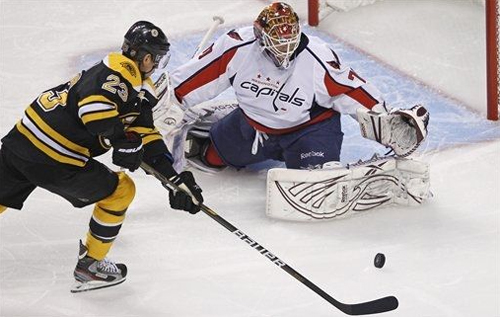 Braden Holtby was spectacular in his NHL postseason debut as he single-handedly kept the game competitive while stopping 29 shots.

Unfortunately for the 22-year-old though, he plays for the Washington Capitals which means overtime in the playoffs can only end in disappointment and heartache.

Holtby was nearly flawless all night long. But the one that got away was the difference as the defending Stanley Cup champion Boston Bruins captured Game 1 of this first-round match-up by a score of 1-0.

As a franchise, the Capitals have participated in some of the longest playoff overtime games in NHL history. This was not one of them.

Never before had Washington played 60 minutes of playoff hockey without either team scoring a goal. Sadly, just 1:18 into the extra session, Bruins forward Chris Kelly unleashed a slapshot from the faceoff circle that Holtby misjudged and Boston escaped this tightly-contested affair with a victory.

“I don’t really know what happened on it,” Holtby said. “I kind of lost it a little bit. I really don’t know.”

While I firmly believe moral victories are for losers, there’s zero reason for Holtby to hang his head after this setback. Sure, he might have been seeing his first postseason action, but he was without question the team’s best player all night long.

His performance in the second period alone — when Boston outshot the Capitals 17-2 — was the only reason Washington was even able to force overtime in a game they were outhit, outworked and out-muscled for a majority of the game.

“I think he played a hell of a game,” said captain Alex Ovechkin said of his rookie netminder. “Most of the time he kept us in the game and I think he was nervous, but after the first shot you could see he was calm and he was on his roll.”

Even Tim Thomas, the Bruins goalie who has seemingly won every award and accolade possible, walked away impressed with what he saw from the opposing goalie in Game 1.

“I thought he played very well,” Thomas said. “I didn’t see a lot of holes tonight. He worked very hard. I’m hoping he expended a lot of energy and wore himself out a little bit, because I hope he doesn’t play that good every game. I thought he did a very good job.”

There was a particular stretch of hockey at the end of the first period and into the beginning of the second, when Holtby officially announced his arrival. It started when forward Jay Beagle was called for high sticking and was sent to the penalty box for four minutes.

Not only did Holtby and the penalty killers narrowly avoid disaster by somehow twarting Boston’s aggressive attack during the man advantage, but they were then called upon to do it again after forward Troy Brouwer was whistled for delay of game just two seconds after Beagle’s extended penalty expired.

If there were any questions about whether or not Holtby could handle the pressure, that six minutes of hockey quieted skeptics and showed he was just as capable as injured goalies Tomas Vokoun and Michal Neuvirth.

“I felt all right,” said Holtby. “Later on in the game I felt like there were some things I needed to be better at. I got a little sloppy with some things and those are the things I’ll need to make improvements on for the next game. But mainly, I wasn’t there for the boys in overtime and I’ll definitely be better for that.”

While it’s understandable to hear Holtby sounds humbled and disappointed after the loss, he truly couldn’t have done anything more — short of scoring a goal on Thomas himself — to put Washington in a position to win Game 1.

Again, he faced as many shots during the second period as Thomas did the entire evening. He was tested early and often and was as good as any reasonable human being could have expected in his postseason debut.

Counting the regular-season finale, Holtby has now stopped 64 of the last 66 shots he’s faced. He was rock solid in Washington’s 4-1 win over the New York Rangers that earned the Caps the seventh seed and he was even better against Boston.

If he’s able to play anywhere close to this level for the duration of this series, the Capitals will be in good shape. Of course, if his team’s offense doesn’t get going sooner rather than later, it’s not going to be much of a series.

The good news is, the Caps have a second chance to steal a game in Boston Saturday afternoon. Even after swallowing such a bitter pill in the series opener, the Capitals will be in great shape if they can head back to the Verizon Center with the series tied at one game apiece.

Considering how often Ovechkin and friends have been stymied in the postseason by a hot goalie, it has to feel good seeing Holtby off to such a solid start. Believe me, if Washington can actually be the team featuring the goaltender who catches fire, this series will get better in a hurry.