all eyes on holtby as caps head to boston 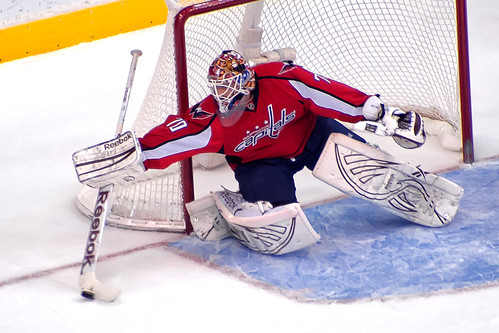 If I’m being honest, the opponent I would have handpicked for the Washington Capitals in the first round of the playoffs would not have been the defending Stanley Cup champion, Boston Bruins.

While the New York Rangers finished the regular season as the Eastern Conference’s top team, they were clearly an opponent the Caps felt comfortable against.

Look no further than the regular season finale in which Washington cruised to an easy 4-1 victory over a Rangers team that openly admitted they had something to play for.

Coach John Tortorella admitted before the game that one of his team’s goals was to take home the President’s Trophy, and yet, his team stalled out of the gate and was never really in the contest.

In fact, the Capitals have basically owned the Rangers over in recent years – going 11-5-2 in their last 18 regular-season games against New York and eliminating the Rangers in two of the last three postseasons.

My second choice would have been the New Jersey Devils. Not only would the Caps have had home-ice advantage, which never hurts, but they would have faced a team that historically is content with winning every game 2-1.

When every game you play is so tightly-contested, you leave yourself very little margin for error. And while Martin Brodeur is easily one of the top goalies of his era, he hasn’t been the same dominant force these last two years.

In fact, Brodeur’s goals against average of 2.41 ranked 15th in the league this year and his save percentage of .908 was just the 33rd best this season.

With the Devils so vulnerable in net, facing them in the first round could have been a nice momentum builder for the Capitals.

Alas, because this team never does anything the easy way, they will now square off with a Bruins team that is obviously battle tested, having won the Stanley Cup one season ago.

Regardless of your personal feelings on the guy, there’s no disputing that Boston has a world-class netminders in Tim Thomas. When he’s locked in,* he’s as tough as anyone in the NHL to beat.

*If I was coaching the Capitals, I’d start Matt Hendricks line in Game 1 and tell him to take a run at Thomas the first chance he gets. Hendricks is already on his mind after embarrassing the Vezina Trophy winner in a shootout the last time these two teams met, so why not try to get into Thomas’ unstable head early in the series?

Unfortunately for the Capitals, Thomas isn’t the only issue. Led by the most physically-imposing defenseman in hockey, Zdeno Chara, the Bruins are never afraid to throw bodies around.

Boston is a fundamentally sound team that excels on both ends of the rink and their physical nature isn’t something any team looks forward to going up against for seven games.

These two teams might not have the same hatred and intensity that the Pittsburgh-Philadelphia matchup features, but there’s still a very good chance things get ugly over the course of the series.

The biggest question for Washington will be if unproven goalie Braden Holtby can handle the pressure of backstopping his first playoff run.

If he can live up to the challenge, the Caps could be in good shape. Of course, if the 22-year-old falters and looks as inexperienced as he actually is, this could be a very short series.

As I’ve said repeatedly over the last two seasons, I am a huge Holtby fan. I like that he plays with a bit of a mean streak and isn’t afraid to take a stick to an opposing player who gets too comfortable in his crease.

Since he first came to town, Holtby has consistently reminded me of Olaf Kolzig – an equally passionate/hot headed goaltender who was a fan favorite during his 17-year career.

Kolzig never shied away from destroying a goalie stick or even dropping the gloves if need be, and the Capitals teams of yesterday often took on his personality.

They played with a bit of a mean streak and embraced Kolzig’s blue-collar mentality as they happily rolled up their sleeves and set out to outwork their opponents.

My biggest gripe with the Caps these days is the team appears to lack any sort of identity. When you watch them play, it’s tough to emphatically say, “This is what this team does better than anyone else.”

My hope is that Holtby plays well enough to solidify himself as the team’s goalie of the future because having him around for an extended period of time could have the same effect on his teammates.

Rather than standing around and watching when an opponent try to cheapshot one of your best players (like the elbow that knocked Nicklas Backstrom out of the lineup for months), I’d like to think that Holtby himself would lead the charge and retaliate if anyone attempted such shenanigans with him in net.

And while coach Dale Hunter’s days appear to be numbered, he too was known for playing with a mean streak back in his glory days.

Upon retirement, the man was given his very own penalty box, so he too was more than capable of sending a message to opposing players that his team wasn’t going to be bullied.

While he’s been content to remain quiet and reserved during his first season as a coach in Washington, now would be a wonderful time for him to come out of his shell and remind his players how it was he was able to make a name for himself.

Over the last few months, the Caps have attempted to shift from the days of run-and-gun to a more defensively-responsible system. They’ve tried to get away from playing finesse hockey as they’ve had to grind it out down the stretch.

The new starting goalie and the new coach are both more than comfortable getting a little nasty to send a message. But if the Capitals are going to get past the Bruins, they can’t be the only two who feel that way.

Here’s hoping the rest of the guys in that locker room are willing and able to follow suit.