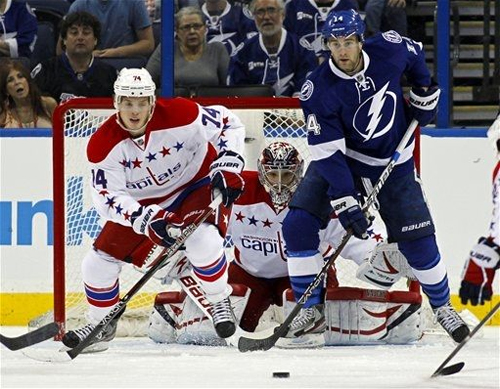 Of course they lost.

At no point during the 2011-12 season have the players who make up the Washington Capitals shown any mental toughness whatsoever, so why would anyone expect for that to magically change with their season on the line?

As soon as the local media started citing a website that listed Washington’s chances of securing a playoff spot at 90 percent, you had to know it was only a matter of time before the Caps began to self destruct.

Nursing a one-goal lead on the road against the decidedly-mediocre Tampa Bay Lightning, the Capitals gave up back-to-back goals in the final three minutes of the second period to ensure this contest was much tougher than it needed to be.

The Caps were then able to tie the game at 2-2 with roughly four minutes left in regulation, but once again suffered a letdown in the final minutes of a period.

With 2:03 left  in the game, the Capitals allowed the league’s top goal scorer, forward Steven Stamkos, a gimmie goal from point-blank range. He, of course, added an empty netter a minute later and Dale Hunter’s team was once again left searching for answers after failing to close out a beatable opponent.

“We were too lackadaisical,” said defenseman Karl Alzner. “We should have come out and tried to pound them right away and get their spirits down.”

It should be noted that Alzner has had to make some semblance of that statement roughly a dozen times this year to explain some of the truly disappointing failures of this team. If he wasn’t such a good quote, I’d suggest to Alzner that he could just get cue cards made up with a variety of quotes like this to preemptively prepare for the next round of letdown games.

“It’s disappointing to say the least,” said forward Troy Brouwer, who was referring to this particular game but might as well have been addressing the season in general.

Had the Caps been able to beat Tampa Bay in a game that meant nothing to the home team, it would have meant Washington’s game with the Florida Panthers was essentially for the division title. Now, they’re destined to either be the last team in the postseason (as the eighth seed) or they’ll miss out completely.

How could Alex Ovechkin and friends let this happen?

“This was a playoff atmosphere,” said Lightning coach Guy Boucher.

Oh, that explains it.

Much like games against Winnipeg and Buffalo in the last two weeks, anytime anyone suggests a game might have some heightened importance, these players show what they’re truly made of.

This team does nothing well. They excel at no aspects of the game. No one — from the front office to the bottom of the roster — should be content with how they’ve played this season, so maybe this team needs to complete the collapse and miss out on the playoffs in order to force a radical overhaul.

That being said, any time critics count the Caps out and the pressure is no longer on them, they respond with authority. So I fully expect them to shine against Florida once they know that winning the division is no longer an option and the mainstream media has turned their attention elsewhere.