caps in no rush to lock up alexander semin 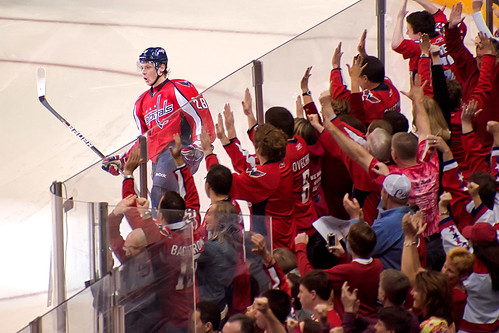 By capturing back-to-back shootout victories over Boston and Montreal, the Washington Capitals are once again in control of their own destiny.

If they can close out the regular season with three more wins, they’ll make the playoffs.

If not, they need to hope and pray that Buffalo falters worse than them down the stretch to keep their postseason hopes alive.

Whichever way things play out, one thing is certain – the Caps will ultimately choose the path that is most stressful.

These last two wins have followed the same script: jump out to an early 2-0 lead, convince yourself the victory is a sure thing and take your foot off the gas and then watch with astonishment as your opponent battles back and forces overtime.

Mercifully, the combination of Matt Hendricks and Alexander Semin has been rock solid in the glorified skills competition to enable Washington to salvage victory during each of these occasions. But each game has definitely come down to the wire in a way that can’t be good for anyone’s health.

And while it’s obviously much more enjoyable to see the Capitals win in dramatic fashion rather than watching them suffer a beatdown in a supposed “must-win” game, it’s apparently causing more than a few folks to overreact.

If we’ve learned anything about the Caps this season it’s that they refuse to make life easy on themselves. Whenever you pencil them in for a win, they fall flat on their face.

Conversely, the moment you count them out, they rally back and win in a way that reminds you just how much talent resides in Washington when they feel like playing.

Naturally, moments after the Capitals secured victory over the Canadiens, people took to the internet to rejoice. And good for them. This year’s squad hasn’t given the locals much to cheer about and even with these back-to-back wins, they’re still just a game or two away from missing out on the Stanley Cup playoffs.

So celebrate while you can, right?

But let’s not go overboard. Like, for example, when a local columnist posts  the following on Twitter:

“Alexander Semin has basically helped save Caps’ season twice in three nights in shootouts. Should he return?”

While I fully admit the Capitals live in a reactionary world where the owner feels compelled to personally respond to each and every email that shows up in his inbox, do people really need to overreact to each and every shift these players take?

For starters, Semin is one of the streakiest players in hockey. When he’s motivated and playing well, few players in the league can match his talent. But he’s also the guy getting paid $6.7 million this season to score 19 goals.

To put that in perspective, Semin is tied with for second on the team with forward Jason Chimera at 19 goals and one ahead of forward Troy Brouwer, who has netted 18 goals on the year.

For the record, those two gentlemen are making a combined $4.2 million this season.

During the 2009-10 season, Semin earned $5 million during a season in which he terrorized goalies and scored 40 goals and 84 points.

This season, Semin is taking home $6.7 million as he repaid the team with 19 goals and 50 points.

It doesn’t really take fancy stats to see what’s going on here: his salary keeps getting higher, but his production continues to decline.

Take your personal feelings for a particular player out of it and look at it purely from a business standpoint.

Knowing full well that a 28-year-old player like Semin isn’t going to come to the team and ask for a pay cut, so why on earth would the Capitals spend such a large chunk of their allotment salary cap space on a player whose production continues to go in the wrong direction?

With so many players poised to hit the market via free agency, the Capitals are going to have to make a few tough decisions. This really shouldn’t be one of them.

And while we’re at it, isn’t the biggest point of contention with the Caps their inability to win in the postseason?

I get that the team’s back is up against the proverbial wall and every win brings the team one step closer to avoiding the potentially embarrassing situation of missing the playoffs altogether. But the last time I checked, there are no shootouts in the playoffs.

So while it’s nice to see Semin rise to the occasion in back-to-back games, none of it really matters if/when the Caps reach the postseason.

And really, if teams broke the bank to reward players who thrive in the shootout, wouldn’t Hendricks be the league’s highest-paid player?

The guy has four goals in 75 games this year, but his ability to humiliate a goalie like Tim Thomas clearly rattled the veteran* during the shootout and set the tone for the rest of the skills competition.

*Seriously, Thomas was so demoralized after being undressed by Hendricks that he fell face first on his way off the ice. Since we’re apparently handing out free money to anyone who can convert during a shootout, shouldn’t that be worth a few extra million?

The truth is, the only two players who should feel completely safe about returning next year are captain Alex Ovechkin and center Nicklas Backstrom.

Every other player in that dressing room should be playing as if their career is on the line from now until the season ends. Because, if this team does fail to make the playoffs, I wouldn’t be surprised if the Capitals head into next season with a new coach, as well as a new general manager.

And it goes without saying that when a new regime comes to town, change happens.

Let’s hope it doesn’t get to that. Let’s hope the Caps continue to play well enough down the stretch to secure a spot in the postseason and that once they get there, they’re able to do something to help fans forget about what a train wreck the 2011-12 season has been.

If not, guys like Semin will likely join Dale Hunter, George McPhee and others in searching for employment elsewhere.