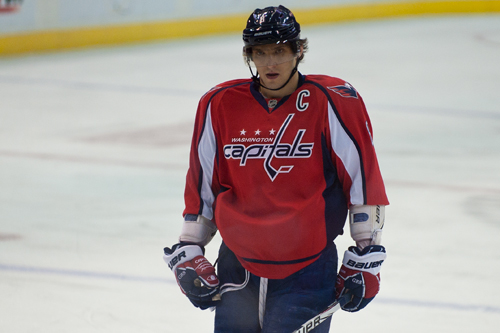 Well, at least the Washington Capitals are considerate enough to not drag things out.

I mean, honestly, Caps fans should be grateful they’re not attempting to get everyone’s hopes up that they’re capable of flipping a switch and become anything more than a mediocre hockey team.

Look at it this way, the players and the coach openly compared this matchup against the streaking Buffalo Sabres to a Game 7 in the days leading up to the contest only to get blown out on their home ice in a lackluster 5-1 loss.

If that doesn’t say everything you need to know about this incarnation of the Capitals, then I don’t know what to tell you.

“I don’t think we played bad. We just made bad mistakes in our zone,” said Caps captain Alex Ovechkin.

Even though the Capitals were 16-7-2 in their last 25 games at the Verizon Center and the place was packed with a sea of red-clad fans for the 144th-consecutive sellout, the team came out flat.

From there, they made a series of poor decisions in their own end and gave away a vital game when so much was clearly on the line. It would have been downright disappointing if it wasn’t so completely predictable.

“It was one of those games where both teams came out and it wasn’t a cat and mouse game, it was wide open hockey game and we took the brunt of it,” said coach Dale Hunter.

This was Washington’s most important game since … last Friday, when the Caps fumbled away a three-goal lead to lose to the Winnipeg Jets in overtime, 4-3.

Are you sensing a pattern yet?

Seriously, every single time these players talk about games of heightened importance, they are unable to get the job done.

With five games left on the schedule, it’s pretty clear who these players are and what they’re made of. If you haven’t figured it out by now, it’s not on them. It’s on you.

I’m not even mad at them anymore. I’ve completely removed any and all expectations I misguidedly placed on them heading into this season and no longer lose sleep over efforts such as this one.

My one hope for this game was that goalie Braden Holtby would continue his recent string of solid outings, but that was foiled right around the time he made an ill-advised pass in the general direction of defenseman Jeff Schultz.

Because Schultz had stopped moving his feet, Sabres forward Brad Boyes intercepted the pass, fired the puck to Cody McCormick, who was positioned perfectly in front of the net for an easy score.

Just like that, the Caps gave their opponent the confidence they needed to seize momentum and ensure they left our nation’s capital with a much-needed victory.

Sadly, that play essentially summed up Washington’s defensive play for the evening. Even though seven defensemen dressed for the game, none of them played a game worth bragging about.

In fact, as far as I’m concerned, the only player who should be even remotely satisfied with his effort after this beatdown was the enigma that is Alexander Semin.

Not only did he score his team’s only goal of the evening, but he was hustling on both ends of the ice and trying to make a difference on a night when too many of his teammates were content to be passengers.

Considering he’s got roughly five games left in Washington, it’s nice to see Semin attempting to go out with some dignity.

But Good Sasha alone wasn’t enough to make a difference against a motivated Buffalo squad that was backstopped by a top-tier goalie, in Ryan Miller.

Even though the Caps were credited with 45 shots on the night, too few of them actually made Miller break a sweat. There was rarely ever sustained pressure applied, so by the time the Sabres had built a 3-0 lead, it was clear how this contest was going to end.

By the time Ovechkin turned the puck over on the powerplay* and enabled Buffalo to score a shorthanded goal to push their lead to 4-1, more than a few Caps fans had seen enough and began heading for the doors.

*The above photo was captured moments after a shell shocked Ovechkin coughed up the puck for the 10th shorthanded goal Washington has allowed this season. He hasn’t looked that baffled since his Russian squad suffered their humiliating loss to Team Canada back in the Olympics.

Here’s hoping when management blows up this team during the offseason, they do a better job of providing talent around the captain that doesn’t automatically wilt under any level of pressure and/or expectations.