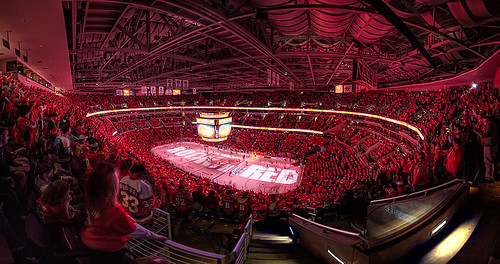 There’s a lot on the line when the puck drops as the Washington Capitals host the Buffalo Sabres at the Verizon Center tonight.

For starters, a quick look at the standings shows that both teams are tied for the eighth and final playoff spot with only a few games remaining in the regular season.

A loss won’t guarantee missing the playoffs, but it’s obviously a scenario both teams would rather avoid if at all possible.

The Sabres, who have earned a point in eight-straight games, have defeated Washington two out of three games this season and boast one of the best goalies in the game, in Ryan Miller.

Speaking of Miller, he earned the NHL’s second star of the week last week after picking up a league-best four wins while posting a 1.26 goals-against average and .956 save percentage.

Of course, Capitals captain Alex Ovechkin was named the league’s third star after scoring six goals and one assist last week, so the biggest names on each team appear to be hitting their stride at the right time for these two squads.

Cliches are thrown around too often in sports, with folks eager to claim every other contest on the schedule is a “must win” or that you can “throw out the record book when these two teams meet up,” but the one thing you can say about Buffalo is that their fans travel well.*

*Probably because Buffalo itself is such a shitty place to live, so they’re always looking for reasons to get out of town, but I digress.

Therefore, it would probably be wise for the home team to get off to a fast start tonight to give Caps fans plenty to cheer about. Honestly, while chances are slim that both the Caps and Sabres will advance to the postseason, it’s safe to say that this game will have a playoff atmosphere.

And since stellar goaltending has been a thorn in the side of these Capitals for a while now,* it’s fitting that Ovechkin and friends will have to get through Miller if they want to continue their playoff push.