can braden holtby be the missing link? 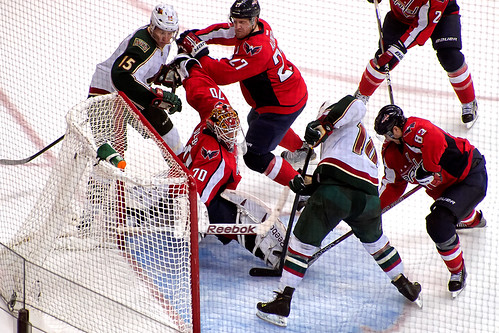 Remember back in the good old days when the Washington Capitals were one of the most exciting teams in hockey and they also happened to boast a trio of young and talented netminders.

Yeah, those days were the best.

Semyon Varlamov was the fan favorite who backstopped a playoff series win over the New York Rangers and Michal Neuvirth also made a strong first impression with his play in both Washington and Hershey.

But it was the third option – a quirky youngster by the name of Braden Holtby – that caught my attention.

Growing up I was always amused watching Philadelphia Flyers goalie Ron Hextall. Now look, I’d never root for a Philly player,* but Hextall was the perfect combination of crazy and talented.

He was skilled, but just as importantly, he was a goalie who was willing and able to drop the gloves if an opposing player angered him enough. And, just for the heck of it, he also liked to try to score goals whenever the opposition pulled their goalie.

*I might be an asshole, but I’m not that much of an asshole.

Closer to home, the Capitals had a goalie named Olaf Kolzig who also played with a bit of a mean streak and wasn’t afraid to get confrontational if need be.

He became an icon in a town that was just learning to love the sport of hockey and to this day ranks as one of the best interviews I’ve ever been a part of because of his candid nature.

I’m not saying Holtby is destined to be the next Hextall or Kolzig, but he definitely reminds me of those two larger than life personalities when I see him in action, which is why he immediately became the goalie I gravitated towards when these three youngsters became part of the Capitals organization.

I didn’t necessarily believe he was destined to have the best career of the three and I didn’t automatically turn on Varlamov and/or Neuvirth. I just found myself thoroughly enjoying whenever Holtby made a start in Washington and I paid more attention to the Hershey Bears during the times he was down in the minor leagues.

At some point in the early stages of Holtby’s first stint with the Capitals, I found myself chatting with someone in the organization about the three netminders. Without sharing my stance on the trio, I simply asked this person for his take on each of them and who he believed had the highest ceiling.

Much to my surprise, he said he thought Holtby could be the best of the bunch because “he takes things so personally.” He went on to say that when Holtby has a bad game, it keeps him up at night.

Not only that, but then he takes it upon himself to come in first thing the next morning and get with his coaches to figure out what went wrong and how he can prevent it from happening again. Basically, he’s a perfectionist who holds himself to the highest standard.

Considering how frustratingly maddening it is when an extremely talented player comes along with the ability to be great, but poor work ethic, it was an absolute breath of fresh air to hear just how much this kid gives a damn about being the best player he can be.

Hearing what Holtby is all about from someone who gets to see him behind the scenes when the cameras are off only made me pull for the kid that much more. From that point on, I was officially on Team Holtby.

Fast forward a year and Varlamov is no longer around. He was shipped off to Colorado for a first round pick and replaced by veteran Tomas Vokoun.

Vokoun, who was signed to a one-year, bargain-basement contract this past offseason, has been solid but unspectacular in 47 games this season. And Neuvirth is still prominently involved, but he only has 11 wins in 33 games played this season.

So basically, both goalies have been good. But neither player has been able to lock down the position or put the team on their back and solidify things in their own end of the ice.

Case in point: the New York Rangers and the Capitals have essentially scored the same number of goals this season (206 to 205).

But the reason the Rangers are currently the top team in the Eastern Conference and Washington is clinging to the eighth and final playoff spot is that the Caps have allowed 46 more goals this season (168 to 214).

All of which opens the door for Holtby.

With Vokoun doing his best Varlamov impression – which is code for “nursing a groin injury” – Holtby was given the start Sunday night against the Minnesota Wild in what many considered yet another “must-win” game for Washington.

How did the second-year player respond? By stopping all 28 shots he faced en route to his third career shutout as the Caps cruised to a much-needed 3-0 win.

The next time the Capitals see action is Tuesday night against a Buffalo team that has gotten hot at the right time. Both teams are desperately fighting to lock down one of the final playoff spots in the East, with the Sabres having the added bonus of one of the league’s best goalies – Ryan Miller.

Judging by his performance against Minnesota, Holtby should earn the start in Washington’s biggest matchup remaining on the schedule. And if he plays as well as he did against the Wild, then he might very well become the go-to guy for the Capitals down the stretch.

The last time a goalie showed up out of nowhere and caught fire with the season on the line was Cristobal Huet back in 2007-08. One game against a mediocre Minnesota team doesn’t begin to equal the run Huet* had during his brief stint here, but it’s a nice start.

*Huet closed out the regular season with an 11-2 record, a 1.63 goals against average and a .936 save percentage. That’s called getting it done.

Holtby deserves a chance for an encore performance against the Sabres. And if he does, Caps fans can only hope that he continues to provide stability in the biggest area a playoff-aspiring team has.