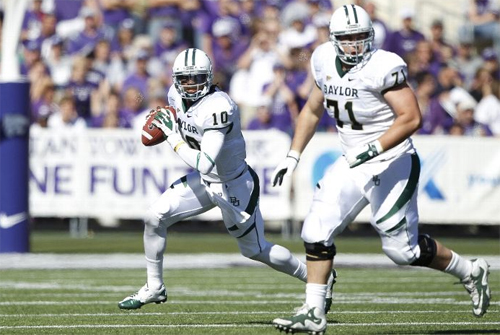 I’ve heard more than a few people whispering about the Washington Redskins being shady or underhanded in the way that they pulled off the blockbuster trade with the St. Louis Rams to land the second-overall pick in the 2012 NFL Draft, and frankly I’m tired of it.

This all started, of course, after Cleveland Browns president Mike Holmgren whined to season ticket holders during a conference call last week.

“I’m not going to tell you exactly what we offered, but I will say what we had offered for the pick was every bit the offer that was chosen,” Holmgren said. “There are reasons I can’t go into right now why it didn’t happen, but there’s a very close relationship between the people that were involved in getting the deal done, and the people eventually got it done. I’m not sure if any offer we made at the end of the day was going to be quite good enough.”

It doesn’t take a rocket surgeon like Joe Theismann to get what Holmgren is selling. Because finding season tickets buyers for a Cleveland team that has exactly one playoff win since 1990 is tough enough, he’s doing his best to prevent the natives from getting restless after missing out on the chance to land a franchise cornerstone like Baylor’s Robert Griffin III.

Like I said, I get why Holmgren is going with that narrative. Unfortunately for Holmgren though, that’s simply not the case.

There was no collusion between St. Louis and Washington. There was no malicious intent by the Rams to stick it to the Browns. It all sounds great in a spreading gossip kind of way, but anyone familiar with what actually transpired should know better.

The central figure in all of this is Rams general manager Les Snead. And while I have never had the pleasure of meeting Mr. Snead I can confidently say that I have the utmost respect for him and the way he chooses to conduct business.

At the beginning of the process, Snead informed all of the interested parties how things were going to play out. His message was simple — present us with your team’s best offer and whoever proposes the best move for us will land the second-overall pick.

What happened next is pretty straight forward. The Redskins, desperate for a legitimate franchise quarterback for the first time since Sonny Jurgensen, offered up their first-round pick in 2012, 2013 and 2014, as well as their second rounder in 2012 for the No. 2 pick.

Now, if you’re the Rams and these are the top best offers you received, which one would you go with? I mean, do you pass up a free second rounder just for giggles or do you walk away with the best deal on the table?

Again, this doesn’t take Norman Einstein. Snead took the deal offered by the Redskins not because of a good working relationship with the people involved, he took it because it was better for his franchise.

It is rumored that the Browns made a last-minute desperation move and tried to throw in a second-round pick to entice the Rams, but it was simply too little, too late.

As far as Snead was concerned, “best offer” meant best offer. He wasn’t going to take one team’s proposed deal and shop it to other teams. He wasn’t trying to play teams against each other or any other prolonged nonsense. He simply said, “first team to sweep us off our feet wins the RGIII sweepstakes” and the Redskins outbid the Browns.

If I’m a Browns fan, I’m not mad at the Rams or Redskins for the way the trade talks played out. Both teams were upfront and honest. Both front offices conducted business in a professional manner. At no point did anyone involve resort to shady backroom deals.*

*That kind of behavior is reserved for NFL commissioner Roger Goodell and his cronies who thinks it’s acceptable to sabotage a franchise by stealing away all of their salary cap room roughly 24 hours before the start of free agency.

“Rest assured we were aggressively involved in that,” Holmgren said. “It didn’t work. Do you take your ball and go home? No. You go to the next step. We didn’t fold up our tent. Now we’re going to do what we have to do based on the fact we didn’t get that done.”

That’s a nice sentiment — although, admittedly, it would have sounded better had it not come during the same conversation as Holmgren’s previous crybaby stance, but I digress.

Now, just go out and have another miserable season so your Brownies will be in prime position to land USC’s Matt Barkley a year from now. Unless, of course, he’s got friends on another team in the league who might be interested in his services. If that’s the case, then it really might just be time to take your ball and go home.