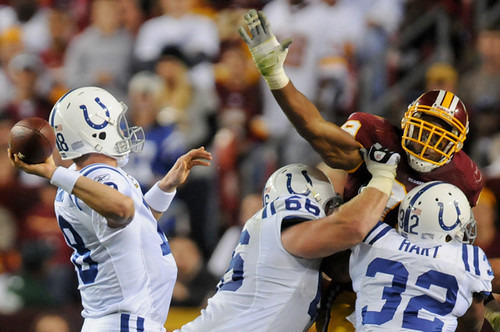 The Washington Redskins have been associated with seemingly every big story the NFL has had this offseason.

Local fans are still reeling from the league’s decision to penalize the Redskins for salary cap decisions that were made during an (allegedly) uncapped year.

That announcement, of course, came just days after one of the biggest trades in football history which will hopefully bring Baylor quarterback Robert Griffin III to D.C.

But before all of that, there was a huge controversy involving a former member of the Washington coaching staff that had everyone questioning the integrity of the game.

Gregg Williams, who oversaw the defense under head coach Joe Gibbs, found himself in the league’s crosshairs after an NFL investigation found that his New Orleans Saints defense had a bounty system from 2009-2011 involving more than 20 players.

From there, it was only a matter of time before people began second-guessing every other stop in Williams’ coaching career — including Washington.

While that was to be expected, I can honestly say I was a bit surprised when this controversy was then linked to the one headline of the offseason the Redskins had managed to avoid — Peyton Manning.

Turns out, that former Indianapolis Colts head coach Tony Dungy is convinced Manning’s neck issues all started back in 2006 against the Redskins.*

*Here’s a video of the play, for those who are interested.

“Earlier in the game, I’m outraged that there was a flag for roughing-the-passer on Dwight Freeney for just grazing the quarterback’s helmet,” Dungy said. “So I’m yelling at the ref [Scott Green], ‘Where’s the flag! Where’s the flag!’ And I don’t yell much, but I did then. So I didn’t notice Peyton calling timeout and being shaken up. Peyton came to the sideline and said to [backup] Jim Sorgi, ‘Jim, start warming up.’ As the timeout went on, he said to us, ‘I can stay in, but we need to run the ball here.”’

“Then we sort of forgot about it at halftime, and Peyton seemed fine,” Dungy continued. “He lit it up in the second half. He was on fire [throwing for 244 yards and three touchdowns]. But that’s the year we started cutting back on his throws at practice. I’m not putting two plus two together. I just figure he’s getting older and he needs some time off, he’s made enough throws. But now, as I look back on it, there’s no doubt in my mind that this was the start of his neck problems.”

That story by Dungy led Peter King, of Sports Illustrated, to write the following:

“There’s no evidence that Washington’s defenders had a bounty out on Manning that night. But it’s a question, surely, that begs to be asked. And if I were one of the league investigators interviewing Williams today, it’s certainly something I’d explore.”

King isn’t the only person to wonder whether or not Washington defenders purposely tried to injure Manning that night, so I went straight to the source and asked former Redskins defensive end Andre Carter to shed some light on the play and on Gregg Williams in general.

When the Gregg Williams controversy broke, more than a few mainstream media wondered if a particular play involving you, Phil Daniels and Peyton Manning back in ’06 might have had something to do with all of this bounty talk. First of all, do you remember the play in question?

“Yeah, I remember it,” Carter said. “That was just one of those plays when both of us were coming from our side of the field and we met in the middle. It’s just one of those fluke plays that happens in football sometimes. We’re not trying to take that guy out. One of us happened to hit him high and one of us hit him low, but it’s not like either of us wanted to try and take the guy out.”

With that in mind, how do you respond to people questioning whether you’d purposely try to injure Manning or anyone else to pocket some extra money?

“That talk doesn’t sit well with me at all,” Carter said. “At the end of the day, we’re talking about someone else’s career. Why would I try to jeopardize someone else’s career while they’re trying to make a living? I enjoy my job too much to do something like that and I definitely believe in karma. I mean, I wouldn’t want someone to try and do that to me. That’s just not part of the game. I don’t like to hear people criticize or question the way we play, but at the end of the day we were just trying to make a play on the ball. It was fluky and it was unfortunate, but we never tried to take him out of the game. That’s just nonsense.”

Unfortunately, we live in a world where people love to rush to judgment without knowing anything about the situation. Could you talk a little bit about what Gregg Williams was like when you played for him.

“I played for Gregg for a while and I never once saw him stand up in front of us and say, ‘I want you to take this guy out,'” Carter said. “That just wasn’t his style. Now, people who have been around him or played for him know Gregg is very aggressive. He takes pride in what he does and wants the best from his players. In general, when he talks, we listen.

“He’s kind of like an old school general in the matter-of-fact way he does his job,” he continued. “He tells you, ‘We need to stop the run and rush the passer.’ He wants you to be physical and to outmatch their tempo. There are plenty of offenses out there that want to get physical and hit you in the mouth, so his mindset is never going to be to just take it and like it. Those are the things he always emphasized with us, but it was never about trying to take a guy out or hurt someone else so he’ll give you this much money. That just wasn’t Gregg’s mentality.”

“He knows his players and he knows how to use them,” Carter said. “For a veteran player like myself, he didn’t really need to talk to me that much in terms of what needs to be done. Because I know what I need to do once we step out onto that field. But as far as a younger guy or a rookie, he would definitely talk to them more because he wanted to guide them in the right direction to help them become a better player. Did he ever get in someone’s face or yell at them? Yeah, because he expects a lot from his players whether they’re young or old. But like I said, he takes pride in what he does and loves the game.”

Point blank: was there a bounty system at any point during your time in Washington?

“When I was with the Washington Redskins there was no bounty system. Period,” Carter said.