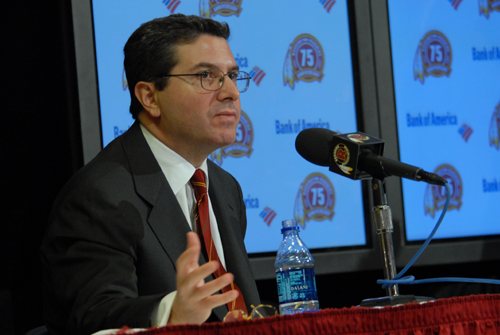 I’d be so furious at this very moment that I’d strongly consider going to war with the National Football League after the cowardly decision to penalize the Redskins $36 million in salary cap space for front-loading contracts during the 2010 season.

In case you missed it, the Redskins were penalized for creatively restructuring the contracts of former defensive tackle Albert Haynesworth and current cornerback DeAngelo Hall.

During the ’10 season, Washington adjusted the deals of these two players to immediately absorb large cap hits during the uncapped year that normally are spread out over the length of the contracts. Apparently, this was deemed unfair because it gave the Redskins an advantage over other NFL teams who failed to work the system to their benefit.

So now, the Redskins, who were set to have roughly $31 million in salary cap space once free agency kicks off tomorrow afternoon, have some seriously difficult decisions to make as they continue to try and retool Mike Shanahan’s roster.

While I openly admit that I’m a ‘Skins fan and therefore will have a tough time remaining impartial when something like this happens, I feel strongly that this is something I wouldn’t be on board with regardless of whether my favorite football team was involved or not.

For starters, I’m not exactly sure how the league can penalize a team for how they choose to handle their team salaries during an uncapped year.

If there was a law or league rule that was violated, then show it to us in writing. If a team was strongly encouraged to not get creative with contracts, but didn’t actually break a law, then I ask again — how can the NFL punish a team for how they chose to handle team salaries in an uncapped year?

This seems a pretty ridiculous thing for the league to do. Either the year is uncapped or it’s not. To tell teams, “Yeah, it’s uncapped, but don’t spend too much this year just because of that, or we’ll fine you for it down the road” feels a little bit like collusion to me. But this is the NFL, which does what it wants and makes up the rules as it goes along.

Also, as Andrew Brandt points out, “All NFL contracts are approved by the NFL Management Council. Curious that there is now punishment for these contracts.”

If the league had a problem with the restructuring of these two deals, then why not handle the situation when it happened rather than waiting a year and dropping a bombshell 24 hours before the start of free agency? That’s nothing but evil and vindictive. That’s expected behavior from a scorned ex-girlfriend. Not the commissioner of a billion-dollar business.

If I’m in The Danny’s shoes, I’m absolutely ready to get into a pissing contest with Roger Goodell and his mafia buddies who thought this was acceptable. First step, since the NFL was “kind” enough to give the Redskins the option of spreading the $36 million cap hit over two seasons, I’d push as much as possible to next year.

And then I’d file a lawsuit.

Honestly, if you’re willing to take on a no-name columnist from a publication that’s nearly impossible to find for writing mean things about you, then surely you’ve got the stones to stand up when someone tries to maliciously hurt your franchise.

If you’re willing to file suit against grandmas who aren’t able to pay for season tickets because of a down economy, then there’s no reason you can’t get your lawyers back on the line and have them meet you at the courthouse for another day in front of the judge.

Now’s your chance to file the one lawsuit that will actually win* the respect of ‘Skins fans who have considered you public enemy number one since the day you took over the burgundy and gold more than a decade ago.

Put on your best suit, head to the courthouse and look Goodell straight in the eyes while saying, “No one is going to bully anyone around here except me.”

And let’s not forget the other owners who happily accept your money when it’s revenue sharing time, but ran to tell daddy that it was unfair the Redskins actually tried to work the system to set their franchise up for long-term success during a year with no salary cap.

Not only did they rush to tattle and demand action even though no actual rules were broken, but now these cowardly owners get rewarded with $1.6 million in extra salary cap space in this insane drug deal. So stock up on ammo, kick the door down and let loose on this dictator while sending a message to his little “yes men.”

Goodell does whatever the hell he wants whenever the hell he wants to and has yet to be challenged. You, Mr. Snyder, are nothing if not stubborn and you’ve never been afraid to burn a bridge or two when push comes to shove, so lets get the legal team back on speed dial and make this happen.

Go out and sign Vincent Jackson and any other free agent you had your pretty little heart set on and tie up the legal system for as long as it takes to get this backdoor ruling overturned. Short of selling the team or giving away free season tickets, you’re never going to have the opportunity to win over more fans than you do right now.

So do the right thing and sue the hell out of Roger Goodell. I can’t believe I’m saying this, but by doing so you might finally win over the fans who fill up your stadium on Sundays.

“The Washington Redskins have received no written documentation from the NFL concerning adjustments to the team salary cap in 2012 as reported in various media outlets. Every contract entered into by the club during the applicable periods complied with the 2010 and 2011 collective bargaining agreements and, in fact, were approved by the NFL commissioner’s office. We look forward to free agency, the draft and the coming football season.”

Take a look at this chart which shows how teams like the Chiefs, Bears and Texans handled the uncapped year and tell me again why Redskins and Cowboys have been singled out and penalized. And let’s not forget the four teams who spent less than $100 million on salaries in 2010, but somehow didn’t effect the league’s “competitive balance.”

This ruling continues to feel completely arbitrary as the Redskins and Dallas Cowboys are being held accountable for not adhering to a gentleman’s agreement/collusion.