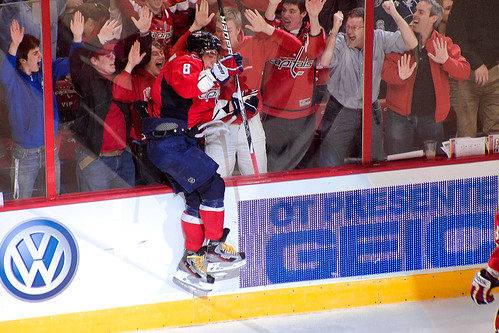 After last night’s come-from-behind 3-2 victory over the Tampa Bay Lightning in overtime, the Washington Capitals have 15 games remaining on the schedule.

It was great to see the spirited effort by center Marcus Johansson in the late stages of regulation to force overtime and watching captain Alex Ovechkin’s game winner during the final minute was obviously thrilling for everyone involved.

But it’s still troubling for anyone hoping that Caps can make a playoff run that it took a second-intermission tirade from a normally reserved Dale Hunter to kick these players in the pants and get them to take more than three shots in a period.

“His message was just to man up,” said defenseman Karl Alzner. “Play hard and play as a team. He yelled at us pretty much for one of the first times that he has ever yelled at us and the guys just snapped out of it.”

It’s safe to say that the final 20 games of the regular season will go a long way towards determining how management proceeds. A hot streak to close out the campaign might be enough to convince management to keep the band together while faltering down the stretch could be enough to trigger sweeping changes.

And yet, the team continues to lack any sense of urgency even though the players openly admit this was a “must-win” game. Why these players continue to fall asleep at the wheel for long stretches each night is beyond comprehension and the fact that it took a tirade from their frustrated coach to give this group of grown men a much-needed wake-up call is absolutely troubling.

The win improved Washington’s record to 2-2-1 during their five-game home stand, which again isn’t exactly putting your best foot forward. Maybe if the Caps weren’t completely atrocious on the road (11-18-3), the situation wouldn’t be so maddening. But they are, so it is.

For better or worse, we’ve reached the defining stretch for these players. Local fans are about to find out if Ovechkin and friends have the mental toughness needed to overcome adversity or if they really do wilt under pressure as opponents have claimed in the past.

Last season, the Capitals went 16-3-1 over the final 20 games of the regular season.

That’s good enough for a combined record of 55-15-10 over the last four seasons, so clearly the Capitals are capable of getting hot at the right time. But they’re going to have to pick up the pace and do better than the 2-2-1 record they’ve strung together thus far.

Picking up five out of a possible 10 points isn’t exactly ideal, but Washington still resides in the eighth place in the Eastern Conference this morning. So they’ve got that going for them, which is nice.

Of course, the theme of the season is this team’s refusal to do things the easy way, so it’s fitting that the Caps will need to find their stride while playing nine of their final 15 games on the road.

Critics like me feel the only way to fix this mess is to make radical changes to an obviously flawed roster this offseason. Obviously, the players are hoping to avoid that route.

Now is the time for them to “nut up or shut up.”