brouwer aside, caps fail to put up a fight 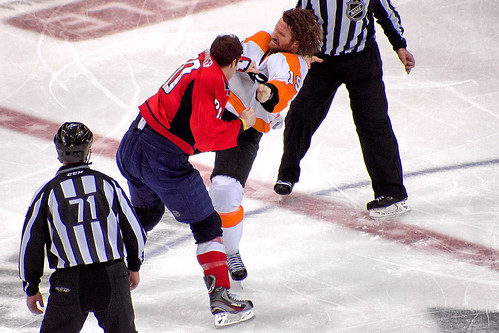 The Washington Capitals are done. Stick a fork in them, because their season is over.

Sure, there will be those delusional fans who will attempt to sugarcoat the situation by praising a bunch of millionaire athletes because they actually decided to put forth an honest effort against the Philadelphia Flyers Sunday night (as opposed to the beatdown they suffered against New Jersey in their previous game).

But my advice for those optimistically-minded individuals would be to save yourself the embarrassment. It’s clear these players aren’t nearly as invested as the local fanbase, so why on earth would you want to lose sleep over such a soft team?

In case you missed it, the Capitals offense took the night off in a 1-0 loss to a vulnerable Flyers squad.

I’ve been on record for a while now emphatically stating that there’s little reason to believe these players are capable of anything remotely special, and Alex Ovechkin and friends are dead set on proving me right.

With a chance to make up ground on two of the teams directly above them in the Eastern Conference standings, the Capitals failed to score a single goal in back-to-back home games.

If that doesn’t tell you everything you need to know about the composition of this team, then I don’t know what will.

The defining characteristic of these Capitals has been their inability to respond to adversity. When the tough gets going, too often these players pack it up and call it quits.

This final 20-game stretch of the 2011-12 season is easily the most pivotal moment for this franchise as presently comprised, and yet, these players couldn’t be bothered to even show up against New Jersey and failed to get a single puck past one of the shakiest starting goalies in the entire NHL against Philly.

The Flyers had given up the first goal in nine-straight contests prior to Sunday. Clearly it didn’t matter though because Washington wasn’t interested in taking advantage of the situation.

You might remember the Caps rallying back against the New York Islanders to steal two points and push their winning streak to three games.

Well, looking back now, it appears that what was really going on was these players put together five minutes worth of actual effort against the Islanders followed up by back-to-back duds against the Devils and Flyers.

Can the Capitals still backdoor their way into the postseason? Of course.

Should fans hold their breath or rush to take out a loan to pay for playoff tickets? Probably not.

Again, during the defining stretch of the season, Washington has won just four of the last 12 games.

At the start of the broadcast, it was pointed out that the Verizon Center as recently as a season ago was one of the most electric buildings in all of hockey.

This was used as context to point out that there was very little buzz when the puck was dropped at the start of a game against a rival with serious playoff implications.

And the announcers were right – the Caps fans in attendance weren’t as fired up as usual when the game started against Philly. But that’s to be expected when you have no clue whether or not the players you’ve paid to see are going to bother to give a damn.

And then forward Troy Brouwer wrecked Flyers defenseman Erik Gustafsson into the boards in a collision that was so violent it jarred open the door to Washington’s bench.

Moments later, Brouwer was forced to drop the gloves against forward Scott Hartnell, who took exception to the clean, but vicious hit.

A handful of punches were thrown and even fewer actually landed, but the bout was enough to energize the Verizon Center faithful.

The crowd was rowdy and the Caps skated with a renewed sense of urgency, although they had nothing to show for it.

Although Washington was able to get a healthy number of shots on Flyers goalie Ilya Bryzgalov, it was never a sustained attack and a majority of the shots came from long range without anyone screening the goaltender.

While Philadelphia was able to score a fluky goal on a deflection in front of the net, the Caps were once again content with making cutesy drop passes rather than crashing the net and actually attempting to make Bryzgalov sweat.

The broadcast talked openly about Ovechkin being a shell of his former self and being unable to get his mojo back. Watching him struggle with seemingly routine hockey plays such as receiving a pass and getting back to help out on defense did little to dispel that notion.

The lone goal of the night came courtesy of someone allegedly named Eric Wellwood when Ovechkin was much more interested in jumping up into the offensive play than he was hustling back into his defensive zone.

Back in the day, allowing a goal like that would be no big deal because Ovechkin would atone for his sins by scoring two goals himself. But those days (and the coach who ushered them in) are long gone.

My sincere hope is that Capitals general manager George McPhee took a long, hard look at the Flyers Sunday.

Their front office saw a flawed roster and wasn’t afraid to radically overhaul the team’s foundation.

General manager Paul Holmgren didn’t hesitate to trade away key players such as Jeff Carter and Mike Richards when he felt the team needed to change directions and his bold move has paid off.

Newly acquired players such as Jaromir Jagr, Wayne Simmonds and Max Talbot have all been vital contributors for Philly this year as the Flyers have become the NHL’s highest-scoring team.

Even with shaky goaltending the Flyers are able to complete most nights because of the front office’s honest assessment of the team’s strengths and weaknesses.

Meanwhile, back in our nation’s capital, the local hockey team once again failed to live up to the heightened expectations.

Players who are paid large sums of money for their offensive prowess continue to vanish when their teammates need them most and suddenly the Capitals are a lot closer to last place in the conference standings than they are to first.

Anyone willing to make an honest assessment of the situation has to see this team is fatally flawed.

But until either the general manager or the owner take that plunge and admit there’s a problem, I’ve got a feeling things will continue to get worse before they’re going to get better.

So feel free to grab a beverage of choice because this is probably going to continue to be a bumpy ride down the stretch.