can the caps build on their comeback win? 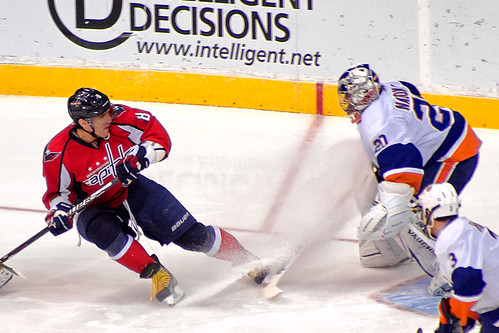 Fans of the Washington Capitals are still riding high after the team’s thrilling come-from-behind 3-2 victory in overtime Tuesday night.

Seeing the Caps rally back to defeat a New York Islanders squad that had owned them all season long* was absolutely a welcomed surprise.

*The Islanders, in fact, were the only Eastern Conference team the Capitals had failed to beat this season.

The week might have gotten off to a rocky start when general manager George McPhee failed to make any moves at the trade deadline, but games like this will go a long ways towards helping disgruntled fans to quickly get over the front office’s inactivity.

And while Caps captain Alex Ovechkin was critical of his own performance against New York — saying he didn’t think he had a very good game outside of his overtime tally — he was able to elevate his game when his team needed him most.

“I had a lucky goal,” Ovechkin said. “I got the screen and I think I tried probably three times today to get that shot through.”

Sometimes it’s better to be lucky than good. And Ovechkin’s self-proclaimed “lucky” goal just might be the spark this team needs to get going for the final 19 games of the regular season.

“I’ve been struggling a little bit lately,” said forward Troy Brouwer, after netting two goals in the game’s final four minutes. “It’s nice to break out in such dramatic fashion but two big points by the team is what’s most important.”

As of this morning, the Capitals sit in eighth place in the Eastern Conference with 69 points. They trail Florida by three points for the third seed and there are a total of four teams trailing Washington by five points or less. Needless to say, every game between now and the regular season finale counts.

Fortunately for the Caps, even though they’ve won just four out of their last 10 games, Washington is currently enjoying a three-game winning streak.

Momentum appears to be in their favor and the schedule makers were kind enough to give the Capitals 10 of their final 19 games at home.

If that’s not enough, the next two opponents — New Jersey and Philadelphia — currently sit in seventh and sixth in the Eastern Conference. So two more timely wins could really help Washington’s cause down the stretch.

If Ovechkin and friends can’t get motivated to play these two games, then there’s no reason to even bring up anymore postseason talk. But if they’re able to carry over the effort from the Islanders game, then the final month of the regular season might not be so bad after all.