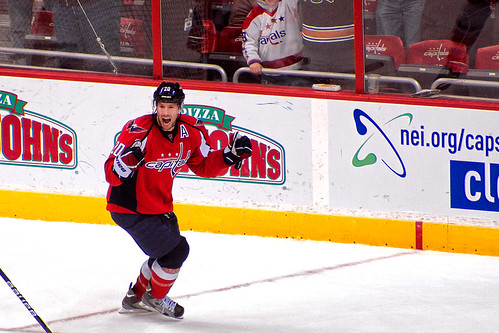 I firmly believe that hockey, more than any other sport, is a game of momentum.

When it’s in a team’s favor, anything is possible. When it’s not, one hot goalie or one unlucky bounce of the puck can can single-handedly end a team’s playoff hopes.

While I continue to believe Washington Capitals general manager George McPhee made what could amount to a monumental mistake by not trying to get something in return for the players he’s set to lose in free agency, I’m happy to turn my attention to another topic today.

Watching the Caps rally back in the final three minutes of regulation in a game they trailed 2-0 to a New York Islanders team they had yet to beat in three tries this season easily ranks among the team’s highlights for the season.*

*Off the top of my head, the only other game I’d put in the same category as last night’s edge-of-your-seat 3-2 overtime victory would be the surprising 5-3 win over the  Boston Bruins. Watching a shorthanded Caps team trade blows with the defending Stanley Cup champion and come out on top would be my other favorite game of this otherwise depressing season.

Speaking of shifts in momentum, it was great to see forward Troy Brouwer finally get back on the stat sheet.

After failing to tally a goal in 13 consecutive games, Brouwer made up for lost time by beating Islanders goalie Evgeni Nabokov twice in the final three and a half minutes of regulation.

How did Brouwer finally snap out of his slump? By getting back to basics and simply crashing the net.

Even though Nabokov had stonewalled the Caps for 56 minutes and there was little reason to believe Washington could mount such a comeback, the Caps just kept hustling and doing the little things that make a big difference.

Like forward Jason Chimera narrowly beating out an icing call. And then forward Mathieu Perreault seeing Brouwer storm the crease and firing a perfectly-place puck through traffic to his teammate’s stick.

Suddenly, the Verizon Center no longer resembled a public library. Fans were on their feet — rocking the red and unleashing the fury — and the players were re-energized.

Even though the odds were still against them, the Caps kept hustling and doing what they could to continue to put the pressure the Islanders.

When handsome/forward Brooks Laich fired a puck on net and Brouwer deflected it past Nabokov into the back of the net to tie the game with 25 seconds left in regulation, it truly felt as if the Capitals were once again the feel-good franchise that captivated our nation’s capital just a few short years ago.

The crowd erupted. The players went nuts. And best of all, everyone in that building — the Islanders included — knew there was zero chance the Capitals were going to lose this game.

Sure enough, less than two minutes into overtime captain Alex Ovechkin scored just his second game-winning goal of the season and the improbable comeback was complete.

While he’s has been far from stellar at times this season, his overtime tally was “vintage Ovechkin.”

The 26-year-old put his team on his back, bull-rushed the goalie and rifled a wrist shot into the back of the net.

For one night, all was right with the Washington Capitals.

And if you’re the Islanders, you really have to consider petitioning the NHL to not schedule a game against the Caps for the end of February.

*I also remember this game fondly because it took place on my birthday and my wife surprised me with tickets. This was our last road trip before our son came into the world, and it was definitely an enjoyable one.

A year and two days later the Capitals once again delivered a stomach punch to the Islanders when they least expected it. (And once again I was in attendance thanks to a birthday present. Clearly more people should buy me tickets to Caps games.)

And now, everything seems a little less “doom and gloom” with the Capitals.

Last season’s come-from-behind win over the Islanders kicked off a nine-game winning streak for Washington. This year’s thriller gave the Caps their third-straight victory.

But if the team can continue to seize the momentum and the players are willing to continue to roll up their sleeves and outwork their opponents, then this team might have enough fight left in it to make things interesting down the stretch.

The roster is still flawed. The players still don’t really fit with the coach’s preferred style of play. The goals are still hard to come by.

Seeing the team “rally the troops” and kick it into another gear just when everyone was ready to count them out of this game has to give even the most skeptical of fans hope that the Caps can do the same in their playoff push.

When GMGM failed to pull the trigger at the trade deadline he defended the decision by saying, “I believe in these players.”

If the Capitals continue to play like they did against the Islanders Tuesday night, McPhee’s faith just might be rewarded.