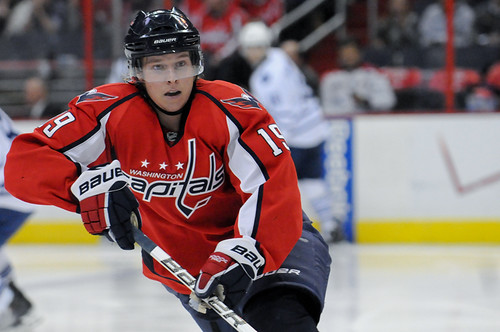 Remember when the Washington Redskins went into last season with Rex Grossman and John Beck as the only options at quarterbacks even though everyone knew it was a terrible idea?

And remember just how badly that experiment ended – even though management was more than happy to “stake their reputation” on Grossman and Beck?

Well, that’s pretty much what happened with the Washington Capitals on trade deadline day.

Rather than attempting to strengthen a clearly flawed roster, general manager George McPhee opted to bury his head in the sand and pretend that everything is just fine.

“We would have added something to the team if we thought it would make us better, but it had to make us better,” McPhee said. “What transpired today, really there wasn’t anything there that would have been the right thing for our club. Everyone seemed to want our players but they wanted to give us futures and prospects. I wasn’t interested in doing that.”

Okay, it’s tough to really argue with that stance. Let’s hear what else GMGM had to say.

Again, if you’re on the fence about renewing your Capitals season tickets after a fifth-straight year of increased ticket prices, this is exactly the type of sentiment you’re hoping to hear from management.

“The theme of this year’s deadline was everyone wanted to add and there was no one selling,” he added.

This is where McPhee and I differ.

While McPhee is content to paint everything in black and white – saying teams were either buying or selling and that his only options were bad deals or no deals – I hope that fans are able to see through the rhetoric.

For starters, GMGM had ample time to improve his club prior to the trade deadline. He chose not to.

This team’s problem didn’t just pop up in the last week or so. The Caps have been a sinking ship since November.

And yet, the biggest move McPhee has made this season was pointing out the Capitals are 8-0 when everyone is healthy, the stars are aligned properly and every fan in attendance purchases nachos and a bobblehead.

So he’s still saddled with an underperforming roster that doesn’t mesh with the current coach unless everyone gets healthy and fans take out a second mortgage.

It should go without saying that when seemingly every player on the roster is having a down season at the same exact time that’s probably a sign that all is not well in Washington.

And with Nicklas Backstrom out of the lineup for the foreseeable future as he recovers from a concussion, the Caps still lack a legitimate first- or second-line center.

Let’s not forget the Capitals also struggle with secondary scoring – meaning if the big guns are having an off night, the team has trouble lighting the lamp and whoever is in net essentially has to pitch a shutout in order for Washington to bring home a victory.

Speaking of, this team is also terrible on the road and often looks sluggish and/or disinterested during the first period, which is why the Caps often find themselves trailing 2-0 at the first intermission.*

*I guess it’s fitting that the Capitals went missing on trade deadline day. After all, they’ve no-showed plenty of other key moments throughout the 2011-12 season.

Also, while it was great to see the Capitals defeat Montreal and Toronto in the final two games before the trade deadline, it’s still troubling that it took the team 19 games to win those back-to-back games.

But McPhee swears the only deals to be made were bad ones, so Caps fans should have faith that this team is still a contender just as long as Backstrom’s brain becomes unscrambled in time for a playoff run.*

*And if Backstrom isn’t able to return to action this season, that’s okay too. McPhee has a built-in excuse and everyone can just continue to believe this team was one injury away from bringing home the Stanley Cup for the first time in franchise history. Right?

My issue with the “no deals or bad deals” mantra is that by doing nothing, McPhee has put all of his proverbial eggs in one basket with no real way of knowing if/when Backstrom is able to play again this season.

Rather than painting everything in black and white, how about we turn our attention to the gray areas. Like, addressing some of the roster issues the franchise is going to face this offseason.

On the blue line alone, the Caps are going to have to decide whether or not to re-sign restricted free agents Mike Green and John Carlson, as well as unrestricted free agent Dennis Wideman. Forward Alexander Semin and goalie Tomas Vokoun will also need new contracts.

Since the team must deal with the same salary cap restrictions as the rest of the NHL, not all of these players will be back next season.

Because of McPhee’s inactivity, the Capitals will now lose some of these players without getting anything in return.

So while it’s great to hear GMGM’s stance of “no deal or bad deal,” it’s just not true. In this case, making no deal translates to a bad deal for the franchise down the road.

Call me crazy, but I’ve got to believe that trading away Knuble or Wideman – even if the best return the team gets involved picks and/or prospects – is better than watching them walk away during free agency.

Is that black and white enough for you, Mr. McPhee?

Anyone who scored tickets to Tuesday night’s game against the New York Islanders in hopes of seeing a new-and-improved Caps team is going to be severely disappointed.

My question is this: what happens if the Capitals are down 2-0 to the Islanders after the first period?

Will Caps fans be content to voice their displeasure with a simple booing of the home team or has the situation gotten ugly enough that they’re going to storm the press box in search of GMGM?

Moving forward, will Caps fans be able to see through the rhetoric and understand McPhee has had four months to address this team’s problems or will they be content to put all their eggs in GMGM’s basket of nonsense?

Everyone knew a team banking on Grossman and Beck was doomed from the start. Hopefully those same local fans are willing and able to see the warning signs once again.