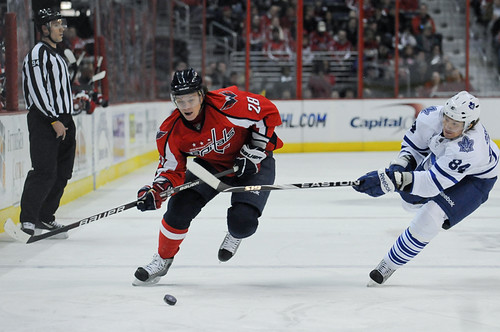 While it was a welcome site to see the Washington Capitals win back-to-back games for the first time since Jan. 15, I’m more than a little concerned about the timing of it.

When a team goes more than a month without putting together two solid games in a row, it should be a clear sign that all is not well with a team saddled by lofty expectations.

And yet, these two wins – Friday’s 4-1 victory over Montreal and Saturday’s 4-2 victory over Toronto – could be just enough for Caps general manager George McPhee to convince himself that there’s no reason to make any drastic moves before today’s 3 p.m. trade deadline.*

*Let’s be honest: GMGM’s preference is going to make a minor move or two rather than shipping off one of the big names on the roster. Why? Because trading away one of his “core” players would mean he’d have to admit that the team he constructed might be flawed.

It might not be ideal for the franchise you’re running, but it’s obviously better for self preservation if you remain stubborn and wrong rather than give your boss an idea that you might not have all the answers.

Watching the Capitals jump out to a lead on a vulnerable opponent and not let up in consecutive outings was a wonderful surprise for any Caps fan. My only question is – where has this effort been all year?

Forward Matt Hendricks said something interesting over the weekend that definitely caught my attention.

“Hopefully, we swayed some opinions. We’re playing well, and we like our group,” Hendricks said.

Again, why does it take a proverbial gun to the head to get these players to respond?

Washington had lost six of the last seven games heading into the weekend, but suddenly there’s a sense of urgency because someone might be held accountable for such a lackluster season?

That’s troubling to me as a fan, and I’d hope that management would feel the same way. It’s great to see two dominant efforts in a row, but what happens a week from now when these players no longer have the threat of being shipped out of town hanging over their heads?

With that in mind, I’ve come up with five Capitals players who could/should be moved before the trade deadline. Take a look and let me know your thoughts on who should stay and who should go.

Alexander Semin. Look, I fully understand he’s been less of a train wreck of late. I hear those  Semin has contributed 22 points in his last 24 games and he’s only racked up 10 penalty minutes during the same span.

But it’s tough to look at the price tag ($6.7 million this year) and justify the production (he’s on pace for 24 goals, 34 assists and 58 points). Committing nearly seven million a year to a 40-goal scorer is one thing, but locking in that chunk of change for someone who is currently tied for 77th in the league in scoring makes zero sense.

There’s also the fact that he’s never played in all 82 games in a single season during his seven years in Washington and the fact that you never really know which Sasha is going to show up. Good Sasha can almost single-handedly win a playoff series with his deft scoring touch (just ask the New York Rangers).

Bad Sasha is just as lethal. In a bad way.

So either McPhee continues to sign Semin to another decade of one-year deals or he moves the enigmatic forward to clear salary cap room in hopes of dedicating that money to someone who is a little more reliable and a little less insane.

Mike Knuble. My stance on Knuble’s situation is already on the record. I firmly believe that the gritty forward can still contribute to a playoff team if he’s not relegated to five to seven minutes a night on a team’s fourth line.

Coach Dale Hunter clearly feels comfortable utilizing other players and there will always be teams looking to add that one final piece to a playoff-ready roster. So move the 39-year-old to a Western Conference team and let him end his career on a high note, rather than wasting away as a healthy scratch.

Roman Hamrlik. The 18-year veteran defender can easily relate to Knuble’s situation – namely because he too has found himself out of the lineup of late. The biggest difference between Knuble and the 37-year-old though, is that Hamrlik has decided to voice his displeasure.

Whether you agree with your coach’s decision to bench you or not, it’s probably not wise to call him out and openly question his integrity. And yet, one day after Hamrlik found himself out of the lineup for taking an ill-advised penalty, Hamrlik sounded off on Hunter.

“When he played I think he make lots of penalties himself,” Hamrlik said. “He should know better.”

If only one person on this list is actually moved today, it’s probably a safe bet that Hamrlik is that guy.

Jeff Schultz. Andre Carter’s favorite hockey player resided in Hunter’s doghouse for much of the season. In fact, Schultz played in just six games in December and failed to play in a single January game for the Caps.

But Schultz seems to have worked his way back into his coach’s favor as he’s taken the ice in 12 out of 13 possible February games. Whether he’s played well enough to stick around or the team is simply playing him enough in hopes of increasing his trade value is tough to say.

Dennis Wideman. When Alex Ovechkin opted out of the All-Star Game, it left Wideman as the team’s lone representative.

And if I’m being honest, Wideman is one of the only players on the roster who shouldn’t feel completely ashamed about his performance this season – as he’s stepped into Mike Green’s role as the team’s top offensive defenseman while the 26-year-old has missed most of the season due to injury.

But Wideman is set to be a free agent after the season and re-signing him is anything but a sure thing. For starters, Green and John Carlson will both be restricted free agents after the season. So will Semin, if management wants to keep him around.
If there’s a way to fit all of those players and Wideman under the salary cap, I’d like to hear it. And while Wideman has played very well this season, he’s also likely to bring back the best return in a trade.

If the choices are keep Wideman and lose him for nothing in free agency or trade him now and acquire pieces for the future, let’s hope GMGM does what’s best for the franchise long term.

And here’s a bonus player who also might receive a phone call today.

Tomas Vokoun. He too will be a free agent after the season. And while Vokoun has a no-movement clause in his contract, it might be worth it for McPhee to see if the veteran goalie is willing to waive it for the right situation.

Teams are always looking to upgrade their netminder and he too could land something substantial in the right trade. So like Wideman, if management knows there’s little chance of Vokoun coming back next season, they should definitely consider trying to work out a deal for the team’s long-term future.

[Update: Craig Custance is hearing that Semin is “as good as gone after the season.”]