breaking down the caps’ 10-point plan 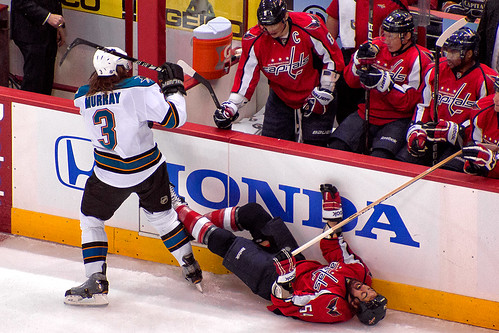 Three years ago, Washington Capitals owner Ted Leonsis was kind enough to articulate his 10-point plan to rebuilding a franchise to my buddies over at Hogs Haven.

This plan was the blueprint used by the Caps in their quest to raise Lord Stanley’s Cup for the first time in franchise history, and if nothing else, elevated the local hockey team from doormat to one of the league’s most exciting teams.

Unfortunately, as any D.C. sports fan can see, all is not well with Ted’s hockey team.

During what players openly acknowledged as a “make or break” four-game road stretch, the Caps went 1-3 while being outscored 13-5.

In fact, the Capitals have just five wins in their last 16 games, which is clearly not the way a team fighting to make it into the postseason should be playing down the stretch.

Through 60 games, Washington has 29 wins and 31 losses on the year and currently sits in 10th place in the Eastern Conference, so it’s tough to believe that even if everyone got healthy overnight this season is going to end in anything other than disappointment.

Not only that, but seemingly every player on the roster is going through a season-long slump and questions surround each of the supposed pillars the franchise is built on.

And let’s not forget the Capitals have already fired one coach – canning the most successful coach in franchise history, Bruce Boudreau, back in November – and the new coach, Dale Hunter, doesn’t have a contract for next season.

Clearly, this team is at a crossroad.

With that in mind, I wanted to take a look back at the owner’s 10-point plan to see just how concerned Caps fans should be about the state of the franchise.

Is it truly time to panic or is this just an unfortunate bump in the road? Here’s what the blueprint says:

1. Ask yourself the big question: “Can this team — as constructed — ever win a championship?” If the answer is yes — stay the course and try to find the right formula — if the answer is no, then plan to rebuild. Don’t fake it — really do the analytics and be brutally honest. Once you have your answer, develop the game plan to try to REALLY win a championship. Always run away from experts that say, “We are just one player away.” Recognize there is no easy and fast systemic fix. It will be a bumpy ride — have confidence in the plan – “trust and verify: the progress — but don’t deviate from the plan.”

From a production standpoint, captain Alex Ovechkin is a shell of his former self. He’s also widely believed to have quit on Boudreau, which is why a coaching change was made. His best friend, Alexander Semin, is a head case who enjoys long walks on the beach and taking dumb penalties at the worst-possible time. Mike Green is never healthy for more than 10 minutes at a time and Nicklas Backstrom, the team’s best player this season, has no clue when he’ll rejoin the team thanks to a concussion.

These are your four highest-paid players and yet, none of this inspires confidence. If management really does decide to be brutally honest as Leonsis said, then can they really believe this team can win a Stanley Cup with these four players as the cornerstones?

I think we all know the depressing answer.

2. Once you make the decision to rebuild — be transparent. Articulate the plan and sell it loudly and proudly to all constituencies, the media, the organization, the fans, your partners, family and anyone who will listen. Agree to what makes for a successful rebuild — in our case it is “a great young team with upside that can make the playoffs for a decade and win a Stanley Cup or two.”

Again, does the team that has underachieved for 60 games this season seem capable of making the playoffs for the next decade? Do these players seem ready and able to win a Stanley Cup or two?

Not looking good for the home team.

3. Once you decide to rebuild — bring the house down to the foundation — be consistent with your plan — and with your asks — we always sought to get “a pick and a prospect” in all of our trades. We believed that volume would yield better results than precision. We decided to trade multiple stars at their prime or peak to get a large volume of young players. Young players will get better as they age, so you have built in upside. Youngsters push vets to play better to keep their jobs, and they stay healthier, and they are more fun — less jaded by pro sports.

General manager George McPhee continues to believe this team has the pieces to compete with the NHL’s elite. He’s on record as saying the Caps are undefeated this season when healthy. While it’s great to cling to that 8-0 record, I find it more than a little troubling that this team’s architect is essentially asking everyone involved to ignore 52 games worth of evidence suggesting the Caps are mediocre at best.

If I’m being “brutally honest,” I think that’s bullshit.

4. Commit to building around the draft. Invest in scouting, development, and a system. Articulate that system and stay with it so that all players feel comfortable — know the language — know what is expected of them — read the Oriole Way. It worked and it is a great tutorial. Draft players that fit the system, not the best player. Draft the best player for the system. Don’t deviate or get seduced by agents, media demands, or by just stats or hype. Envision how this player will slide into your system.

Man, everything sounded great … right up until that point about making sure you acquire players who fit the system. I think it’s safe to say these players are best suited to play run-and-gun hockey. Many of them thrived in Boudreau’s aggressive offense and none of them look comfortable in Hunter’s more defensively-minded system.

Either the Caps have an entire roster of players who don’t fit the current system or they picked the wrong coach. Your choice. But one way or the other, there’s clearly a disconnect between the players and the system.

5. Be patient with young players — throw them in the pool to see if they can swim. Believe in them. Show them loyalty. Re-sign the best young players to long term high priced deals. Show the players you are very loyal to them as compared to free agents who achieved highly for another team. Teach them. Celebrate their successes. Use failures as a way to teach and improve. Coaches must be tough but kind to build confidence.

Youngsters such as Marcus Johansson, Mathieu Perreault, Dmitri Orlov, John Carlson, Karl Alzner, Michal Neuvirth have gotten plenty of ice time this season. Can’t be upset with this one.

6. Make sure the GM, coach, owner and business folks are on the EXACT same page as to deliverables, metrics of success, ultimate goal, process and measured outcomes. Always meet to discuss analytics and don’t be afraid of the truth that the numbers reveal. Manage the outcomes. Manage to let the GM and coach NOT be afraid of taking risks, and make sure there are no surprises. Over communicate. Act like an ethnic family — battle around the dinner table — never in public. Be tight as a team. Protect and enhance each other. Let the right people do their jobs.

There’s no real way of knowing what kind of relationship Leonsis and McPhee have. It’s safe to assume they’re close and speak often and by all accounts the owner has definitely stayed out of the way and let him general manager do his job.

When the day comes for a fall guy to be held responsible, we all know who is going to be looking for employment elsewhere.

7. No jerks allowed. Implement a no jerk policy. Draft and develop and keep high character people. Team chemistry is vital to success. Make sure the best and highest paid players are coachable, show respect to the system, want to be in the city, love to welcome new, young players to the team, have respect for the fan base, show joy in their occupation, get the system, believe in the coaches, have fun in practice, and want to be gym rats. Dump distractions quickly. Life is too short to drink bad wine.

For some reason I keep thinking of the name “Alexander Semin.” Not sure why. Hmmm.

Only Ovechkin, Backstrom and Brooks Laich are signed to long-term deals (all are signed for at least the next five seasons). Although, to be fair, the signing of underachieving forward Joel Ward comes to mind as a move that might not exactly follow this point.

9. Measure and improve. Have shared metrics — know what the progress is — and where it ranks on the timeline — be honest in all appraisals; don’t be afraid to trade young assets for other draft picks to build back end backlog — know the aging of contracts — protect “optionality” to make trades at deadlines or in off season; never get in cap jail. Having dry powder is very important to make needed moves.

The Caps have not improved. That’s the entire reason for this exercise. Now, they have the ability to make moves and everyone agrees that GMGM wants to be aggressive at the trade deadline. But will he try to slap a band-aid on the problem or is he actually willing to address the team’s problems? That’s the million dollar question.

10. Never settle — never rest — keep on improving. Around the edges to the plan, have monthly, quarterly and annual checkups. Refresh the plan when needed but for the right reasons – “how are we doing against our metrics of success and where are we on our path to a championship.” Never listen to bloggers, media, so called experts — to thine own self be true. Enjoy the ride.

It appears that even though I’ve pointed out that the Caps are failing in nearly all 10 points of their plan, Leonsis has made it clear he’s not open to listening to bloggers.

In that case, I sure hope Caps fans are enjoying the ride.