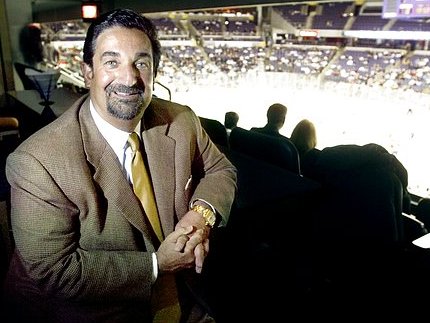 As a sports fan, there is nothing worse than the stark realization that all hope is lost.

Until you reach that breaking point, optimistic fans are able to easily rationalize poor outings by chalking up losses to a tough schedule, bad luck, a rash of injuries or a million other excuses.*

*Does the phrase “We ran into a hot goalie” ring a bell? How about “We couldn’t buy a call the entire game?”

But I’ve been a fan of D.C. sports teams long enough to know that, inevitably, there comes a time in every season when it’s no longer possible to bury your head in the sand and tell yourself that everything is going to work out just fine.

Until recently, the last time that depressing moment of realization came into my life was on Sunday, October 30, 2011.

If I close my eyes, I can still picture it as if it was yesterday.

The 3-3 Washington Redskins traveled to Toronto to take on the 4-2 Buffalo Bills.

Realistically, no one thought for a minute that either franchise was capable of winning the Super Bowl, but both teams had looked decent enough at times during the first two months of the season to inspire a bit of confidence on behalf of their fans.

“Sure, the Redskins aren’t considered part of the NFL’s elite, but at least head coach Mike Shanahan has this team pointed in the right direction,” said damn near every Redskins fan in town.

And then the Buffalo game happened.

The Redskins were systematically destroyed in a 23-0 beatdown by a Bills team that’s so underwhelming they’re forced to play a portion of the home games in another country, and it was clearly time to adjust expectations.

After watching quarterback Rex Grossman get benched for throwing four interceptions in a single game, any chance of Washington salvaging the season hinged on the arm of John Beck.

Shanahan and his son Kyle both swore that Beck could be “the man,” and even went as far as to “stake their reputation” on the unheralded backup, which sounded great … until the 30-year-old actually stepped onto a football field.

But after that demoralizing loss it Toronto, it was clear the Redskins had no backup plan and ‘Skins fans better brace themselves for another forgettable season.

So why am I ripping the band-aid off of this old wound? What good can possibly come from reliving such disheartening moments?

I bring all of this up to help fans of the Washington Capitals prepare for what comes next.

I’m not going to pretend I can make it all better, but hopefully they can at least take some comfort in knowing that they’re not alone.

Anyone who has been a fan of the D.C. sports scene for a while now has been through this – although, to be fair, rarely do local teams have the level of expectations placed on them that the Caps are currently saddled with.

But there’s no doubt in my mind after watching the Capitals get humbled 5-0 by the lowly Carolina Hurricanes that the season is over for Washington.

Regardless of whether this team can even back into the postseason, the Caps are fundamentally flawed.

It was downright adorable last week when Caps general manager George McPhee tried to convince the locals that his team could take on the world, if only they were healthy.

After all, the Capitals are 8-0 this season when Alex Ovechkin, Nicklas Backstrom, Alexander Semin and Mike Green were all in the lineup.

Clearly that means this team would have gone undefeated if not for a fluke injuries or two.

Forget, for a moment, that this team quit on the best coach in franchise history and stinks on the road.

Ignore the part where seemingly every talented player on the roster is going through a season-long slump at the same exact time.

Don’t sweat the small stuff – like the fact that the new coach, Dale Hunter, is being asked to win with a roster made up of players who either can’t or won’t play his brand of hockey.

All that negativity is for bloggers and beat writers who prefer to use “wicked pixels” for evil.

If you’re a true fan, then you just need to curl up in the fetal position and rock yourself to sleep while uttering “If only they were healthy” over and over.

That’s the company line and anyone who isn’t on board clearly has ulterior motives.

And if you want to believe that – if you need to believe that bad guys like me are viewing the Capitals with a critical eye because we’ve got a chip on our shoulder or our parents didn’t love us enough when we were growing up, that’s fine.

But before you dismiss me completely, do me this one favor – go back and take one more look at the 10-point rebuilding plan that owner Ted Leonsis was happy to pimp out when things were going great.

You don’t even need to read the entire plan. Just review step one and then tell me the Capitals are still just fine. For those who aren’t familiar, here’s the first step to successfully rebuilding on a franchise:

1.    Ask yourself the big question: “Can this team – as constructed – ever win a championship?” If the answer is yes – stay the course and try to find the right formula – if the answer is no, then plan to rebuild. Don’t fake it – really do the analytics and be brutally honest. Once you have your answer, develop the game plan to try to REALLY win a championship. Always run away from experts that say, “We are just one player away.” Recognize there is no easy and fast systemic fix. It will be a bumpy ride – have confidence in the plan – “trust and verify: the progress – but don’t deviate from the plan.”

After reading that can even the most optimistic of homers truly believe the Caps are capable of winning it all?

Less than 24 hours after the Capitals were embarrassed by the worst team in the Eastern Conference, does anyone really believe that a healthy Backstrom will suddenly make this team stop shutting down at the first sign of adversity?

The general manager clearly wants fans to believe that the Capitals are one player away from greatness. Thankfully, the owner saw this coming and warned fans years ago to run away from experts like McPhee.

I’m not going to tell anyone else how to root for their favorite hockey team. But having reached my breaking point with these Caps, I am eternally thankful for Leonsis acting as the voice of reason.

His words will no doubt guide me through the final stretch of another disappointing season, but the question remains – is anyone else in the organization listening?

[Update: Remember when I said the Caps’ roster is comprised of players who either can’t or won’t play Hunter’s brand of hockey? Here’s a thorough breakdown. Good times.]