what does shanahan want in a quarterback? 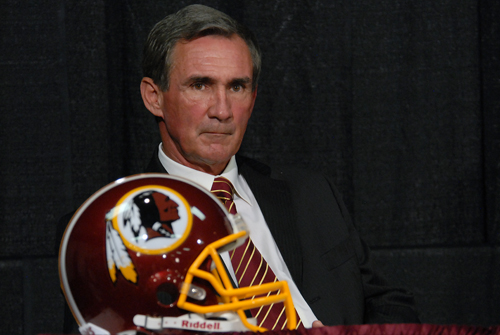 As you’ve hopefully put together by now, each of these gentlemen had the pleasure of playing under coach Mike Shanahan at some point during their respective careers.

I bring them up so they can serve as the starting point for an intriguing question — what exactly does Shanahan look for in a quarterback?

What traits, tendencies and skill set does the two-time Super Bowl winning coach prefer when it comes to his offense’s most important position?

If nothing else, answering that question could go a long way towards figuring out who might be taking the snaps for the Washington Redskins during the 2012 season.

Regardless of whether they choose to acquire a player via the draft, free agency or trade, the front office is going to have to take a detailed look at the players who are available and determine which guy best fits Shanahan’s version of the West Coast offense.

After watching Shanahan’s offense over the last two years, it’s not difficult to see how he prefers to attack defenses — by spreading the field and controlling the ball with short to intermediate passes and then mixing in explosive plays occasionally to try and catch opponents off guard.

And while Mike Shanahan developed a reputation in Denver for taking seemingly any running back and turning him into a thousand-yard rusher over night, things haven’t gone quite the same here in our nation’s capital.

Maybe it’s because the Redskins have lacked a dominant ground game during Shanahan’s two years in D.C., or maybe it’s because the team is often playing from behind, but Washington finished each of the last two seasons in the top five in pass attempts. Detroit, New Orleans, New England and Atlanta were the only teams to throw the ball more often than the Redskins in 2011.

In a perfect world, the Redskins would be able to strike a better balance between the passing game and the ground attack. Short of that, getting a quarterback who simply brings more to the table than they take from it would be huge for this franchise’s stability.

So when you hear talk about the team rolling the dice on Peyton Manning, Kyle Orton or Matt Flynn or walking away from the draft with Robert Griffin III, Ryan Tannehill or a lesser-known rookie, feel free to to keep this checklist in mind.

Chances are, whichever one of those guys earns the highest marks in the following categories will be the face of the franchise when the Redskins take the field Week 1.

Without further delay, I humbly present to you the skills that Mike Shanahan’s dream quarterback would possess:

A strong arm and an accurate deep ball. While Grossman and Beck have done little to suggest either should ever take another snap in the burgundy and gold, the Redskins did manage to finish the 2011 season with 57 completions of 20 or more yards (12th most in the NFL).

Say what you will about them, but that’s pretty impressive considering the lack of playmakers at both quarterback and receiver and the team’s patchwork offensive line for most of the year.

A willingness to make plays downfield. For better or worse, this was one of the deciding factors why Shanahan ultimately turned to Grossman over Beck. The Rex Cannon had no problem taking shots downfield, while Beck was more inclined to dink and dunk his way into three-and-outs. Of course, Grossman was just as capable of making plays for opposing teams as he was his own in those situations, but that’s beside the point.

Which leads me to …

A good decision maker. Offensive coordinator Kyle Shanahan’s comment after the season ended made it clear that whoever lines up at quarterback next season needs to do a better job of protecting the football. That’s because the dynamic duo of Grossman (20 interceptions and eight fumbles) and Beck (four picks and three fumbles) combined for a total of 24 interceptions and 11 fumbles in 2011. It goes without saying that it’s practically impossible to put together a sustained attack when you’re that careless with the football.

Mobility is definitely a plus. How else can you explain Beck remaining employed even though he’s not actually any good?

Accuracy when forced outside of the pocket. Since Washington’s offensive line isn’t exactly invoking comparisons to “The Hogs,” this ability takes on a heightened importance. In related news, Redskins quarterbacks were sacked 41 times during the 2011 season (tied for 11th most in the league).

To be fair, even though the Redskins threw for 3,773 yards (14th most in football) last season, Washington’s quarterbacks completed just 58.5 percent of their passes (21st in the NFL). So better accuracy in general would be a welcome addition to this offense regardless of who plays on the offensive line.

Ability to extend plays when the pocket collapses. This obviously plays into both the mobility and accuracy categories, but sometimes it’s just the ability to make something out of nothing. Players like Cam Newton, Mike Vick or even Tony Romo are able to seemingly dodge a proverbial bullet and/or pull a lucky play out of their backside every once in a while. I bet after two years of subpar quarterback play, Shanahan would love to know how that feels.

Strong work ethic. Surprise, surprise, but a task master like Shanahan is really big on his players arriving early and staying late. It’s another reason why he’s a fan of Beck and might help to explain why things played out the way they did with McNabb.

And of course you’ve got the basics like solid mechanics, mental toughness, poise in the pocket and all of the standard stuff that obvious needs to be taken into account when talking quarterbacks.

Now, just because I compiled a list like this doesn’t mean I’m going to pretend to be able to evaluate the quarterbacks Shanahan and friends are currently researching.

The whole point of this exercise was simply to try and identify to the best of my abilities what it is Shanahan envisions at night when he’s dreaming of his next franchise quarterback.

So I’ll happily leave it up to others to take a look at these abilities and see how well someone like Griffin III or Flynn stacks up.

Just try to keep this in mind the next time you throw together a mock draft or bet your friends the Redskins are going to chase after the biggest names in free agency.

If you’re convincing enough, someone might actually believe you know what the hell it is you’re talking about.