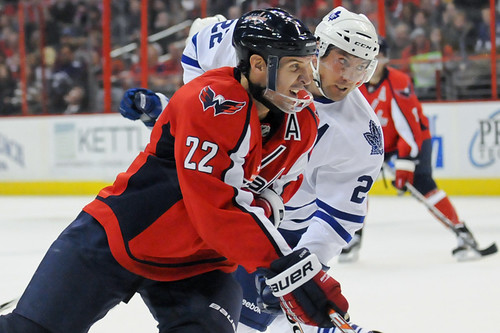 Whatever happened to respecting our elders? Or at the very least, can’t a team that prides itself on being a professionally run organization be man enough to let a guy know when he’s not wanted anymore?

Of course, I’m talking about the current situation brewing between veteran forward Mike Knuble and the Washington Capitals.

And by situation, I mean the last week represents Knuble’s turn in coach Dale Hunter’s doghouse.*

*I guess if you’re looking for a bright side, Knuble can at least seek comfort from defenseman Jeff Schultz or goalies Michal Neuvirth and Tomas Vokoun since each of them can relate to what Knuble is currently going through.

In case you missed it, the 39-year-old has fallen out of favor with the team’s new coach and has found himself out of the lineup as a healthy scratch each of the team’s last three games.

Typically veteran players with 14 years of experience don’t find themselves in this situation unless they’re recovering from an injury.

And yet, Knuble sits while career minor leaguers like Keith Aucoin, Jay Beagle and Joel Rechlicz somehow make the cut.

Don’t get me wrong, I know he’s having a terrible year. Hell, even he knows it and he’d be the first to admit it. But it’s not like Knuble has been set up for success this year.

Knuble currently sits 14th on the team in scoring with just three goals and eight assists for 11 points in 53 games. Only two players – defenseman Roman Hamrlik and forward Matt Hendricks – have less points while seeing action in 50 or more games this season.

No one, most of all Knuble, can be pleased with his lack of production this season. But it should be noted that Knuble ranks 15th on the team in ice time – averaging 14 minutes and 18 seconds of ice time per game.

It goes without saying, the less playing time Knuble gets the more difficult it’s going to be for him to be productive. Of course, playing on the team’s fourth line isn’t helping either, but I digress.

This is a man who was at his best while playing on Washington’s top line with Alex Ovechkin and Nicklas Backstrom.

During the 2009-10 season, Knuble racked up 53 points while averaging just under 17 minutes of ice time per night. That’s also the year that Knuble scored 29 goals on just 151 shots (meaning he converted on 19.2 percent of the shots he took).

So clearly crashing the net while Ovechkin and Backstrom gained all of the extra attention was good for the veteran forward.

The following season, Knuble finished with 40 points while averaging just under 18 minutes of ice time per night. Knuble scored 24 goals on 203 shots (11.8 percent), which is much more in line with his career shooting percentage.

And then the wheels came flying off this year.

Knuble’s three goals on 66 shots are almost comically bad (4.5 percent). We’re talking about a guy who has scored 20 goals in a season eight different times suddenly missing anything and everything he throws on net.

Since he came into the league in 1996-97, Knuble has finished a season with a shooting percentage under 10 percent just once (he converted on just 7.6 percent for Boston back in 2000-01).

There’s no way he forgot how to play the game. The aging veteran is simply dealing with a combination of terrible luck and a lack of scoring chances due to the decrease in playing time and his fourth-line status.

So the question was asked – has Knuble approached the team and requested a trade?

“No, no, but that’s something that you’ve got to face reality,” he said after practice yesterday. “You can handle it a number of ways. You can be content and just sit there and let things happen as they may or you can force an issue. You have to kind of decide that two weeks before the trade deadline. If a player is not going to be used or in the near future, if you don’t have plans, then that player probably wouldn’t want to be there.”

The longer the conversation went on, the more clear it became that while Knuble isn’t necessarily inclined to rock the boat, he definitely doesn’t seem like he’d object to a change of scenery between now and the trade deadline at the end of the month.

“You want to go somewhere where you’re going to play and you’re going to contribute to the team,” Knuble said. “And if you can’t do it in one place, then you’ve got to go. That being said, everybody in here is a little bit frustrated with the way it’s been going lately, and then you throw that on top of things. You watch your team losing and all that, it’s very frustrating.”

There isn’t a single player in Washington’s locker room who can stand up and say he’s having a career year.*

*Okay, maybe rookie defenseman Dmitri Orlov, but you get my point.

Everything about this season has ranked somewhere between utter disappointment and horrific train wreck, and Knuble’s production clearly isn’t where anyone involved would like to see it.

So do the noble thing and trade the veteran to a playoff contender. He deserves that much, rather than being forced out of the lineup in favor of a minor league goon with no discernible talent like Rechlicz.

No one is suggesting that Hunter should be required to use players he doesn’t think give his team the best chance to win with. I’m just saying that if he’s no longer wanted here, the right thing to do is to ship him off to a team who is actually interested in adding a gritty veteran to the roster for a playoff push.

Knuble knows when it comes to his playing days, the end is near. So please Caps, let the guy go out in style. It’s the right thing to do.