another day, another humbling loss for caps 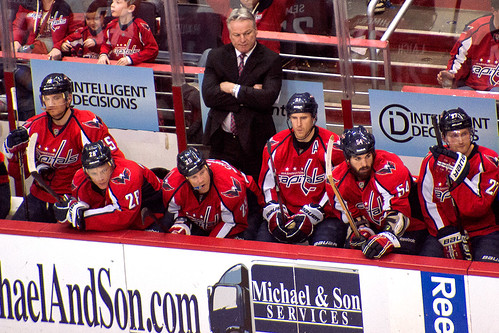 While many teams are loading up for a stretch run in the deciding months of the NHL’s regular season, the Washington Capitals appear completely content to stumble their way towards the finish line.

That the Caps fell to the San Jose Sharks 5-3 isn’t particularly newsworthy — after all, they’ve lost 16 of their last 17 against San Jose — but watching a team that is usually stellar at home fail to show up for a key game against a slumping opponent wasn’t exactly what the fans in attendance at the Verizon Center signed up for.

Maybe coach Dale Hunter thought calling up goalie Braden Holtby a few hours before the puck dropped would give his team some sort of spark. If so, he couldn’t have been thrilled watching a puck find the back of the net from a shot that was fired 69 feet away.

Holtby hadn’t played in a game for Washington in almost a year and he clearly wasn’t at his best, but I truly feel like he deserved a better outcome. In the early moments of this game, the 22-year-old seemed to be one of the only guys in red who actually came to play.

While the Sharks skated circles around the Caps, Holtby continued to stand on his head to keep the game close. But then a fluky deflection off of a shot from behind the red line squirted past Holtby and the wheels came off.

The Sharks seized control and by the time they built a 5-1 lead, there was little reason to continue watching another Capitals’ letdown game.

Rather than beat this team up for losing eight out of their last 11 games, I’ll simply say that anyone who is still on the fence about whether Washington should be buyers or sellers at the trade deadline should be forced to watch this game on a nonstop loop from now until the trade deadline.

I don’t care if Nicklas Backstrom and Mike Green return to action tomorrow, this team isn’t capable of doing anything noteworthy as presently constructed.

So while it’s great to hear the owner suggest his team is going to be aggressive in looking for ways to improve this team, I truly hope management takes a good hard look at this roster and figures out how to salvage some of the pieces.

Don’t fall into the trap of the local football team that swears each and every year it’s just a move away from contention. Because that’s clearly not the case for a Caps team that wouldn’t even make the playoffs if the season started today.

Figure out which players should still be considered building blocks and which players would most benefit from a change of scenery and then give this franchise the kick in the pants it needs to once again be worth the price of admission.

Because judging by the sheer number of fans heading for the door midway through the third period, there are plenty of other places Caps fans would rather be than paying top dollar to watch yet another disappointing effort from a once-promising franchise.