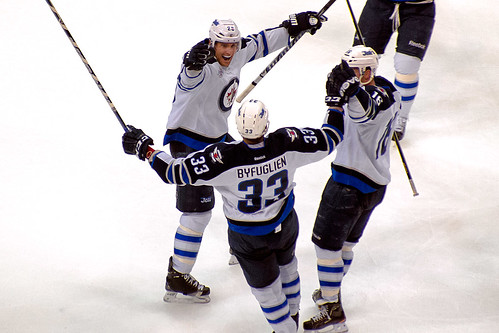 As the Washington Capitals continue to muddle their way through an uninspired regular season, games like this one could ultimately mean the difference between a postseason birth or sweeping changes throughout the organization.

For more than 57 minutes, the Capitals were in the driver’s seat as they imposed their will on a vulnerable opponent.

Washington was winning in seemingly every statistical category – shots on goal, hits, face-offs won and most importantly, they held a 2-0 lead on the scoreboard.

And then the wheels fell off in horrifying fashion.

Inexplicably, a Winnipeg Jets team that ranks 27th in the league in goals per game and had just eight goals in their last seven games turned into an offensive juggernaut – scoring twice in a span of 12 seconds to force overtime.

Things got tense when Jets forward Evander Kane scored during Winnipeg’s six-on-three powerplay, and then a disheartening goal by defenseman Dustin Byfuglien from 82 feet out was the stomach punch the Caps never recovered from.

By the time the overtime period ended, I’m not sure anyone cheering for the home team felt good about Washington’s chances in the shootout. Hockey is a game of momentum, and that’s something the Capitals were clearly lacking by the end of this game.

After shutting out the Florida Panthers earlier in the week, goalie Tomas Vokoun responded with yet another stellar performance. Well … for the first 57 minutes, at least.

In fact, Vokoun has been outstanding at the Verizon Center since Dale Hunter took over as coach of the Capitals.

His 1.91 goals against average and .939 save percentage in 14 home games coming into this contest show why he’s solidified his claim as the team’s top goaltender.

But a powerplay goal when the opposing team had three extra skaters cost him a shot at back-to-back shutouts and a bad bounce off of a Caps defender proved to be the difference.

Vokoun clearly deserved a better outcome, but these are the things that happen when you can’t put away an opponent that is clearly on the ropes.

The Washington Capitals have won just four of their last 10 games and haven’t won back-to-back games in almost a month.

As I continue to write over and over, this team is either unwilling or unable to build any sort of momentum.

Just when it appears Washington is gaining a little confidence and beginning to resemble to team that we’ve all come to know and love, they relapse.

When an offensively-challenged team like the Jets (with their “sparkling” 9-16-4 record on the road this season) comes to town and you’ve built a 2-0 lead in the final minutes of regulation, the game should be over.

Any team that’s actually worth a damn slams the door shut and leave the building with two easy points.

But the more we see of this year’s squad, the more fans have to realize that nothing is automatic for these Capitals.

There is no easy way out.

Even when a wounded opponent is essentially begging to be beaten mercifully, these players find a way to implode.

Rather than seizing the moment and solidifying their footing in tightly-contested battle for the division lead, the Capitals appear content to be the team that everyone else gets well playing against.

Again, this is why I’m basically hoping that this team falters down the stretch. This roster – with or without a healthy Nicklas Backstrom and/or Mike Green – appears to be critically flawed.

Backing into the postseason could easily be enough to convince the front office to keep from making drastic changes. General manager George McPhee can easily talk himself into chalking this up-and-down season to a rash of injuries to key players, but he should know better.

Nobody fears the Washington Capitals anymore. Of course, this team doesn’t do anything particularly well anymore and lacks a true identity, so why shouldn’t teams look forward to seeing them on the schedule?