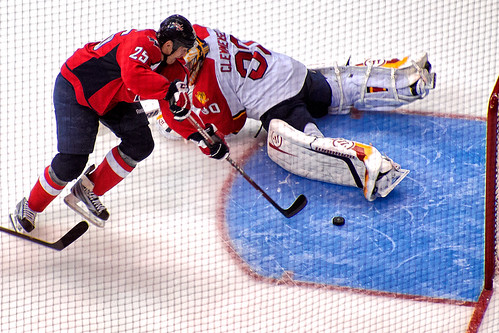 Well then. Wasn’t that a little more enjoyable than what local fans have been subjected to this season?

Watching the Washington Capitals systematically destroy the Florida Panthers in a 4-0 drubbing definitely gave the Verizon Center faithful cause for celebration and had more than a few folks feeling a bit nostalgic.

Of course, with as disappointing as this season has been, it was a sight for sore eyes watching the Caps score the eventual game-winning goal just 13 seconds into a contest.

This was a statement game – not just because Washington was able to leapfrog Florida for first place in the division – but because it’s easily the closest the Caps have come to putting together a complete 60-minute effort since Dale Hunter took over as coach.

From the moment the puck dropped until the final few seconds ticked off the clock, the Capitals looked like the local hockey team many of us have come to know and love during the “Rock the Red” era.

They were simply dominant and the opponent simply had the misfortune of being in the wrong place at the wrong time.

Back in the day, it didn’t matter who took the ice against the Capitals in games like this – they were leaving our nation’s capital with a humbling loss against a talent-laden franchise poised for greatness.*

*Of course, it didn’t exactly work out that way, but let’s move on. No need to dwell on the negative after a game like this.

Caps captain Alex Ovechkin looked every bit as talented as the guy who was arguably the best player in hockey just a year or two ago as he imposed his will on an inferior opponents.

Watching Ovechkin fly up and down the ice looking to get involved in the play – even when it wasn’t necessarily in the offensive zone – was absolutely a welcome surprise.

Because, for as talented as the 26-year-old is, there are definitely times when he appears disinterested in impacting a game on the two thirds of the rink away from the opposing goalie.

And it wasn’t just Ovechkin who came to play against the Panthers.

Even though the Caps remain without the services of center Nicklas Backstrom and defenseman Mike Green, there was no shortage of players willing to make an impact in this one.

Joel Ward had his strongest game in weeks as he grinded it out along the boards. Troy Brouwer hit anyone who skated anywhere near him. Jason Chimera finished the game with a goal and an assist. And so on and so on.

But it was goalie Tomas Vokoun who stole the show on this night. He was simply brilliant in net as he shut out his former employer for the second time this season.

Florida fired 42 shots on net, but Vokoun simply refused to let up as he picked up his fourth shutout of the season.

“We jumped on them early,” said Hunter. “It changed the game a bit when we got two quick goals. They had to play a different game and it ended up at our advantage. We knew what was on the line tonight. We’re battling with Florida. Every two points means a lot. ”

Because in all likelihood only one team out of the mediocre Southeast Division will qualify for the playoffs, a game like this carries heightened significance because it carries a four-point swing in the standings between Washington and Florida.
Clearly that was not lost on the players in the Capitals’ locker room.

“I think guys were really ready,” Chimera said. “You could see the intensity in guys’ eyes.”

This from a team that openly admitted they sometimes have trouble getting up for teams like the Panthers because they aren’t a heated rival like Pittsburgh or Philadelphia.

Seeing the players call this game a must-win affair and Hunter refer to it as a playoff game, and then watching the Caps storm out of the gate and imposing their will on an opponent before fans had even taken their seat was enough to give hope.

For at least one night, this team showed that even without some of the biggest names on the payroll in action, they can still compete at a high level.

For one game, the Capitals were capable of putting together a complete 60-minute effort and everyone on the roster was willing and able to do what was asked of them in a must-win game.

One of the biggest problems with Washington since Hunter took over though, has been the team’s inability to build any sort of momentum.

Was this a one-game blip on an otherwise depressing radar or is this the moment when the Caps finally stopped screwing around and began playing like a team that’s actually worth the price of admission?

I guess we’ll find out one way or the other when the Capitals host the Winnipeg Jets Thursday night. Until then, make sure you enjoy this victory. Because who the hell knows when it might happen again?