it’s not easy being a caps fan these days 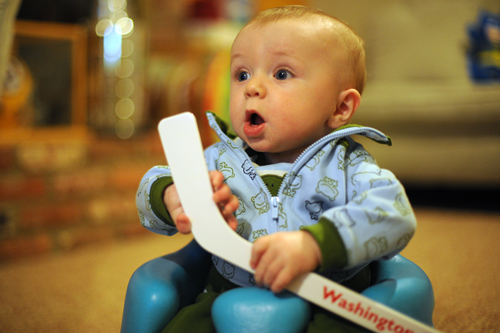 My son taught me something new over the weekend — you’re never too young to be let down by your favorite hockey team.

Sure, he might only be seven-months-old, but even he knows when the Washington Capitals are in the midst of a letdown game.

Just 24 hours after an enjoyable 3-0 victory over the Montreal Canadiens, the Caps failed to show up for the Super Bowl Sunday showdown with the Boston Bruins.

In related news, Tim Thomas and friends left the nation’s capital much happier than their last visit to D.C.*

*Of course, since the president refuses to “Barack the Red,” Thomas showed up at the Verizon Center without fear of his biggest rival exacting revenge.

The Caps fell behind early, rarely challenged Thomas with anything resembling a sustained attack and fell meekly to the defending Stanley Cup champs.

I know defenseman Karl Alzner’s comments about having troubles getting fired up for less glamorous games against teams like the Florida Panthers wasn’t popular, but I admire the kid’s honesty. It’s too bad that the Capitals, who have won just four of their last 10 games, fail to show up often enough for him to catch on to that troubling trend.

This game wasn’t against an unheralded opponent though – it was against a powerhouse Bruins team that was embarrassed at the Verizon Center two weeks ago. A team that came into this matinee match-up having suffered a disappointing loss to Pittsburgh 24 hours earlier.

There was little doubt the Bruins had plenty of motivation to show up for this game. Apparently the same could not be said for Washington.

If that’s not bad enough, forward Brooks Laich (one of the few players on this team who consistently hustles night in and night out) was knocked out of the game with a knee injury and left the building on crutches.

If Laich is out of the lineup for any length of time, it could finally be the breaking point for this already fragile franchise. With center Nicklas Backstrom still out of the lineup recovering from a concussion, the Caps might not win another face-off this season.

Considering how often they struggle to get the puck out of their own zone as it is, it wouldn’t surprise me if Washington’s goalies were seen openly weeping after Laich’s injury.

About the only good thing to come out of this game was my decision to use the hashtag #DickInABox every time Alexander Semin takes an ill-advised stick penalty. Obviously the in-house music at Verizon Center can’t play the song, but that shouldn’t stop Caps fans from calling out the selfish forward.

So if you’re on Twitter, please feel free to join in on the fun. If nothing else, it might help distract fans while their favorite hockey team continues to crash and burn.